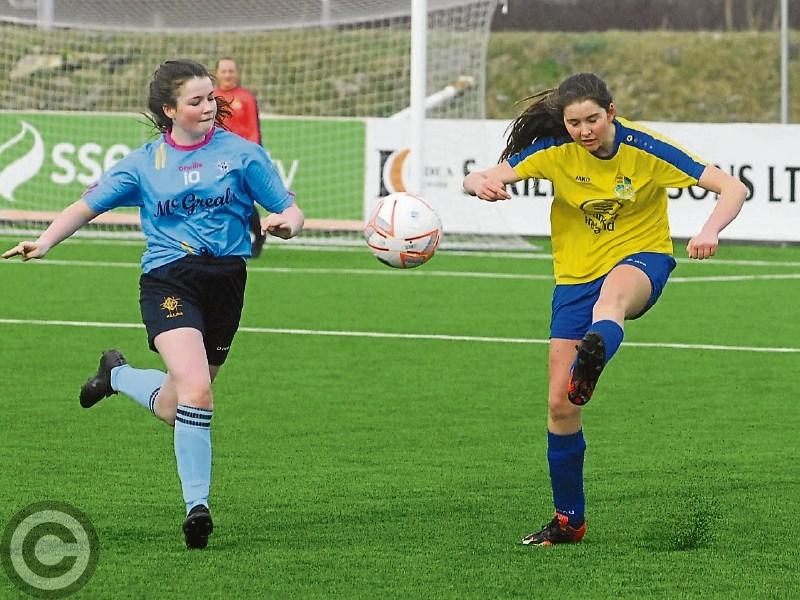 St Clare's magnificent journey that took them to the SFAI national cup final ended in heartbreak on Wednesday last in Athlone when they were defeated by Tullamore school, Killina Presentation.

While it would be hard to argue the Offaly school didn't deserve their victory, St Clare's will reflect on key moments of the game knowing if the rub of the green had gone their way the outcome could very easily have gone in their favour.

As always Muireann Devaney led the charge for St Clare's. It was difficult to pinpoint exactly where the captain was meant to be playing on the pitch as she popped up everywhere. She made telling interventions in her own box, linked play together in midfield as well as scoring a wonderful goal.

There were telling performances throughout the pitch from the likes of goalkeeper Niamh Loughlin, centre-back duo Eilish Victorino and Emma McGloin while midfielders Leah Fox and Erin Somers looked dangerous with the ball at their feet and Hannah Johnston covered every inch of the pitch battling for her team.

After much hard work preparing for the final, St Clare's were dealt a real blow within a minute of the kick-off when Killina struck for the opening goal of the game.

There seemed to be little danger when Ava Dolan gained possession 40 yards from goal but she advanced a further 10 yards before unleashing an unstoppable shot that flew over Niamh Loughlin and into the net to give the Killina school a dream start.

The game was 12 minutes old before St Clare's showed their true threat as an attacking force.

A brilliant pass from Leah Fox released Emma McGloin with the ball then worked to Erin Somers and back to Fox who showed great determination to continue her run into the box. Killina did well to thwart the danger but the ball was only cleared as far as Muireann Devaney who surged into the box but was off target with her shot.

Devaney then saw a 30 yard free kick go narrowly wide while Leah Fox was off target from the edge of the box with a quickly taken snapshot; perhaps not realising that she had enough time to advance closer to goal.

Having put the Killina defence under sustained pressure, St Clare's were dealt a real blow when they conceded a penalty with eight minutes of the first half remaining.

Emma McMorrow was adjudged to have fouled Saorah Lee but it seemed to be a harsh decision with minimal contact evident. Killina's captain Becky Watkins took responsibility for the penalty which she drilled past Niamh Loughlin to put the Tullamore school in a very strong position approaching the interval.

Four minutes after the restart, Muireann Devaney had a clear sight of goal following an excellent through-ball from Hannah Johnston. Unfortunately Devaney didn't connect cleanly with her shot and it went harmlessly wide.

However, that miss was to be forgotten within two minutes when Leah Fox's pass split the Killina defence and Devaney was able to see off the defender before rounding the goalkeeper while seemingly off balance and then slotting her shot to the net.

Barely four minutes later the relentless St Clare's pressure saw them create another brilliant opportunity. Some excellent wing play from Erin Somers on the right flank saw her beat two defenders and then wait until the cavalry arrived in the box.

She then delivered a pinpoint delivery for Devaney who seemed to have done everything right but her shot went over the bar.

Realising the pressure, they were under Killina defended in greater numbers in an attempt to nullify the St Clare's threat and to their credit it proved effective as, with nine minutes remaining, they struck on the counter-attack to all but ensure victory.

Saorah Doyle capitalised on some hesitancy in the St Clare's rearguard and while the Manorhamilton players seemingly waited for one another, Doyle got a decisive touch to dispatch the ball past Niamh Loughlin for a crucial third goal.

There was no chance St Clare's were going to throw in the towel but further proof it wasn't going to be their day arrived in the final minute. Devaney released Leah Fox who held the ball up well before returning the ball to Devaney who unleashed a venomous strike from the edge of the box that crashed off the crossbar.

That proved to be St Care's final clearcut opportunity as Killina held on for a hard fought victory.

Main Woman - Leah Fox, Niamh Loughlin, Hannah Johnston and Leah Fox battled bravely for St Clare's but once again the star performer was Muireann Devaney who was instrumental all over the pitch.

Talking Point - It was a case of what might have been from a St Clare's perspective who recovered brilliantly from a marginal penalty decision.

Turning Point - The penalty was a tough blow to recover from but the concession of a third goal proved too steep a hill to climb.

Highlight -  The play leading up to the St Clare's goal, created by Leah Fox and finished by Muireann Devaney was of  real quality as was another sequence four minutes later when Erin Somers did brilliantly on the right wing before delivering a perfect delivery for  Devaney.

It was a huge disappointment for St Clare's to fall short in a national final for the second time in a few short years.