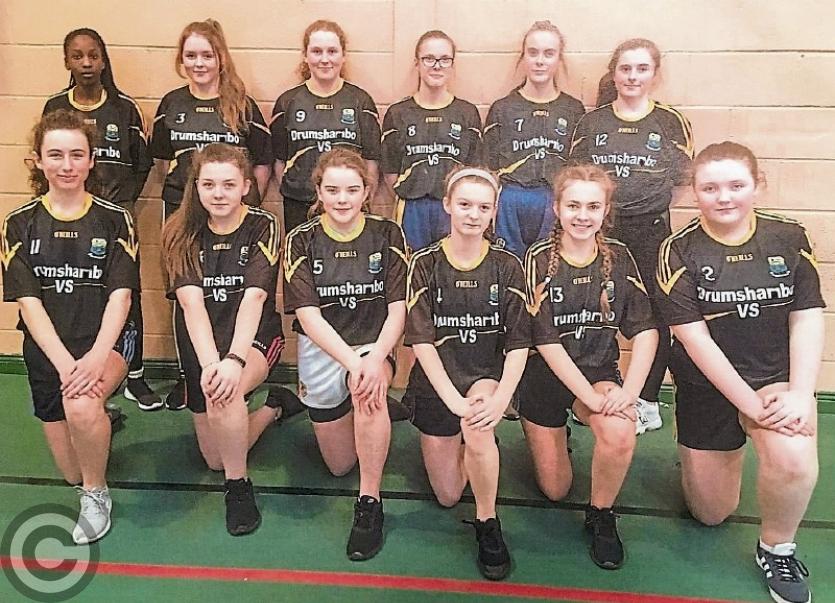 The Drumshanbo VS Girls Junior A volleyball panel

Drumshanbo girls, entering the tough waters of “A” volleyball, acquitted themselves very well and came very close to advancing in Loughrea last Thursday.

Had this game occurred later, with more matches behind them, who knows what might have happened. Drumshanbo got off to a great start, 5-1, thanks to Jessica Rock’s serving and they led up to 9-9. Elphin soared ahead to 19-12. Then, now settled, Aoibhe Logan served them to 16-19, and they battled hard to the end.

Again Rock served them 6-1 ahead and they led 9-4. But Elphin’s Kate Muldowney hit a huge run to put Elphin 13-9 ahead, which they increased to 19-11. Caoimhe Flynn’s serve brought it right back to 18-19 and again Drumshanbo fought well to the end.

Ruby Gallagher had a dream start against one of the top Junior girls schools in the country, giving Drumshanbo a 6-0 lead on her serve. Drumshanbo held their own against very tall opposition up to 11-11 but the Brigid's got their spikes going. Leah Gilmartin brought it back to 15-20.

Brigid’s raced away in the second set. However, Áine McKeon, one of Drumshanbo’s most consistent players all day, matched Loughrea’s standard throughout.

The day ended on a high. Rock, with help from Rebecca Tymon, again helped Drumshanbo into a 9-3 lead, but Brigid's, with the best record in the country for their B team successes, stormed back to 20-15. Rachel Hepburn brought it back to 18-20 but Loughrea sneaked out.

The second set starred the Flynn twins. Aoife’s serve raced Drumshanbo 6-0 ahead while Caoimhe gave Drumshanbo their biggest lead of the day when she served from 13-9 to 19-9. Shannon Keavney played her part then, in winning Drumshanbo their first set win of the day.

Now the question was could they win? Early on, Brigid’s led 7-3 and 8-5. However, by now, Andrea Fallon was in full flight and reading the game well and Drumshanbo led 10-8. Moments later, it was 10-10. Then it was Hassie Deen Swarrey’s turn to serve. She did, all the way to winning at 15 and the girls went home very happy!