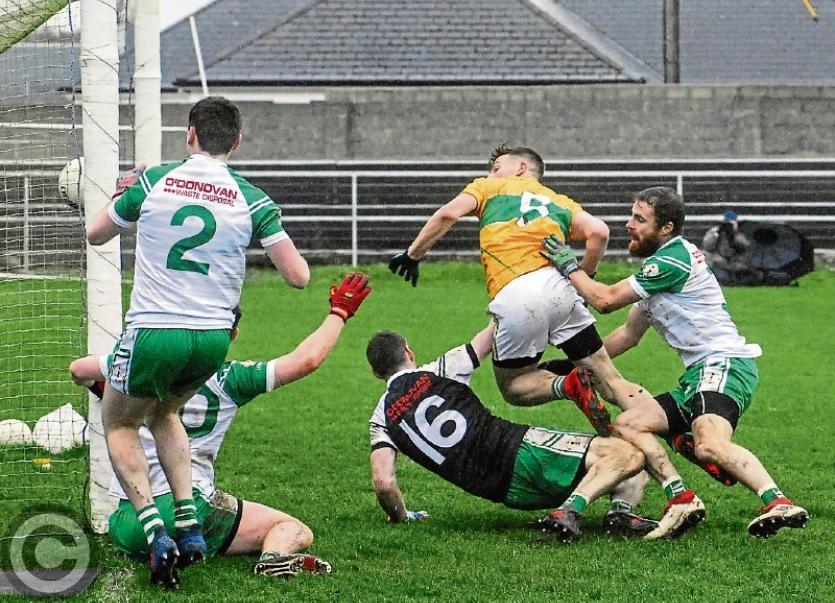 Shane Quinn watches as the ball rebounds off him and go into the net despite the presence of four London players Picture: Willie Donnellan

Nerves were shredded on the field and in the stands and the quality of football was, to put it kindly, poor but that little mattered last Sunday as a nervous Leitrim secured promotion to division 3 football for 2019.

Leitrim's five point victory over London in round five of the Allianz football league won't be remembered as a sparkling encounter but it will be remembered as the day Terry Hyland's team escaped gaelic football's bottom division and secured a trip to Croke Park.

Leitrim will take on Derry in the Division 4 Final on Saturday, March 30, at 5 pm in Croke Park as the green and gold return to headquarters for the first time since the Tommy Murphy Cup Final back in 2006.

Leitrim still have two league games to play, against final opponents Derry on Saturday March 16, and at home against Waterford the following week and Terry Hyland has promised that there will be no let-up over the next two games as he seeks to continue Leitrim's winning ways.

After 11 seasons in the division, Leitrim made sure of promotion at the very first opportunity when seeing off a London team that caused them enormous problems but lacked a killer edge but had every Leitrim player, official and fan on edge until the final whistle actually sounded.

It was not pretty, or even enjoyable, for probably the biggest Leitrim crowd in almost 15 years but when the memory of a stuttering performance fades from the mind, players and fans will remember this day as the day the green and gold secured their first promotion on the field of play since 1990 when Leitrim defeated Wicklow in a division 3B playoff.

Terry Hyland has led Leitrim to the promised land in record time with five victories on the trot but the former Cavan boss agreed that this was easily Leitrim's least impressive display of the campaign.

Leitrim were nervous and with each passing minute, increasingly off-kilter as shots went badly astray and handling was poor as London dominated possession quite easily. Crucially, Leitrim's first score was a goal and the effect was enormous.

Scoreless after 22 minutes, Quinn's goal settled an increasingly frustrated home team and put them into a lead that they never relinquished.

Unfortunately the nerves so evident in the early stages never truly left them and if they learn lessons from this game, perhaps this victory will be remembered as a watershed in the years to come - a day when Leitrim finally came to terms with delivering when the pressure was on.

Make no mistake - the pressure was definitely on and Leitrim didn't react well. Unused to public expectation, lots of media hype and an enormous home crowd, Leitrim struggled but they got there in the end and that is what matters.

The giddy air of anticipation among fans was quickly punctured in the opening minutes last Sunday as London had two points on the board inside the first seven minutes, the first from a Conor Doran free on the left wing with Liam Gavaghan following up after a Leitrim hand touched the ball on the ground.

Even at this early stage, nerves were evident in the Leitrim performance with Ryan O'Rourke hitting a wide before he dropped a free short. James Hynes hit a wide for the visitors before David Carrabine received a rather soft yellow card from referee Liam Devenney but Domhnaill Flynn drove the free well wide.

The wides continued to mount as O'Rourke put what seemed a simple free narrowly wide while Evan Sweeney also missed the target. London picked up another soft yellow, Mark Gottsche going in the book before McDonagh gathered a short O'Rourke shot.

But then, out of nothing, Leitrim struck for the game's decisive score. A strong run saw Shane Quinn make good gains before he offloaded to Pearce Dolan on his left. Dolan's return pass found the Mohill man bearing down on goal and in a comedy of errors, he appeared to lose the ball which hit the keeper before bouncing off Quinn's knee and into the net.

Lady luck has shone on Leitrim at times during this campaign but never as brightly as during this goal and in the following five minutes, Ryan O'Rourke put over two points, one a free.

Gary Plunkett then fired a brilliant effort from 40 yards out on the wing over the bar but London worked a good point from Pierce McGirr. Despite a Dean McGovern wide, Evan Sweeney fisted over to extend the lead.

But a good move from London ensured they ended the half with a Gavaghan point, leaving Leitrim with a 1-4 to 0-4 halftime lead.

The second half was a tough watch with Domhnaill Flynn's third minute point the only score registered by either side in the first 15 minutes. Darragh Rooney replaced Sweeney at the halftime break and wides mounted from O'Rourke, Shane Moran and Domhnaill Flynn with Gavaghan off target for the visitors.

Aidan Flynn ended the scoring drought with a nice point on the run 16 minutes into the half but with the wides mounting and Mark Plunkett and Damian Moran picking up yellow cards, Liam Gavaghan cut the gap with a point on 24 minutes.

An Aidan Flynn intercept and Shane Moran run ended with Gary Plunkett firing over but Gavaghan tapped over another free with ten minutes to go. The Exiles started to push a bit more but had no real cutting edge as Leitrim never looked like losing - it was just that they never looked like playing with the verve and incision that marked their earlier games.

With five minutes to go, Ray Mulvey eased the tension when he chipped over and he added a second that could have been a goal in injury time when Eoin Ward's shot came off the post, Mulvey's volley flying over the bar rather than under.

London got the final score through sub Fergal McMahon but the tension of the 75 plus minutes evaporated when referee Devaney blew his long whistle, sending hundreds of Leitrim fans onto the field to celebrate with their heroes.

MAIN MAN - Not a day on which to pick out epic individual performances. Liam Gavaghan, London's native born captain, was hugely impressive for the Exiles while for Leitrim, captain Micheal McWeeney, Paddy Maguire and Aidan Flynn made light of the tough conditions to patrol their defence with vigilance. Shane Moran continued an impressive League campaign, he is probably Leitrim's Player of the Year, while Dean McGovern and Evan Sweeney had their moments. But the stand out Leitrim player had to be Ray Mulvey - the St. Mary's Kiltoghert clubman scoring two vital points late on to calm Leitrim nerves and see his team across the line and into the Final.

TURNING POINT - The finish for Shane Quinn's goal may have been slightly comical and undoubtedly fortunate but the move that led to it was incisive and deadly, the goal changing the course of the game and setting Leitrim on track for Division 3.

TALKING POINT - Two this week - firstly, great to see such an enormous Leitrim following in Pairc Sean last Sunday. It has been missing for the last few years so long may it continue and grow even stronger. Secondly, Leitrim again failed to rise to an occasion when there are expectations upon them. Everyone likes being underdogs, definitely, but the fact that the green & gold never got going, never performed to the levels we've seen during this League suggests that work remains to be done on the team's psyche. Whether it was the pressure of the crowd, the media attention in the week leading up to it or simply a bad attack of nerves, it is trait that has bedeviled Leitrim teams for almost 30 years now and needs a solution rather urgently.

REF WATCH - Mayo referee Liam Devenney certainly did Leitrim no wrong in this encounter, London's reaction certainly wouldn't be the same as Leitrim got the benefit of quite a few decisions over the course of the game.

HIGHLIGHT - You'd want a heart of stone not to be moved by the celebrations that took place on the field once the final whistle sounded. Great scenes and proof that a tiered system can offer teams realistic goals and accomplishments - nobody in Leitrim was talking about it only being Division 4 last Sunday afternoon!

LOWLIGHT - No escaping the fact that this was a dire game - Leitrim simply didn't perform and London's possession based game, as dull as it is, was undeniably effective and succeeded in killing the mood of Leitrim fans stone dead. Even when Leitrim got the goal and opened up a gap, they couldn't escape the morass this game had slipped into.

WHAT'S NEXT - Leitrim have a week off before they head to Celtic Park on Saturday March 16, for a meeting with table toppers Derry.