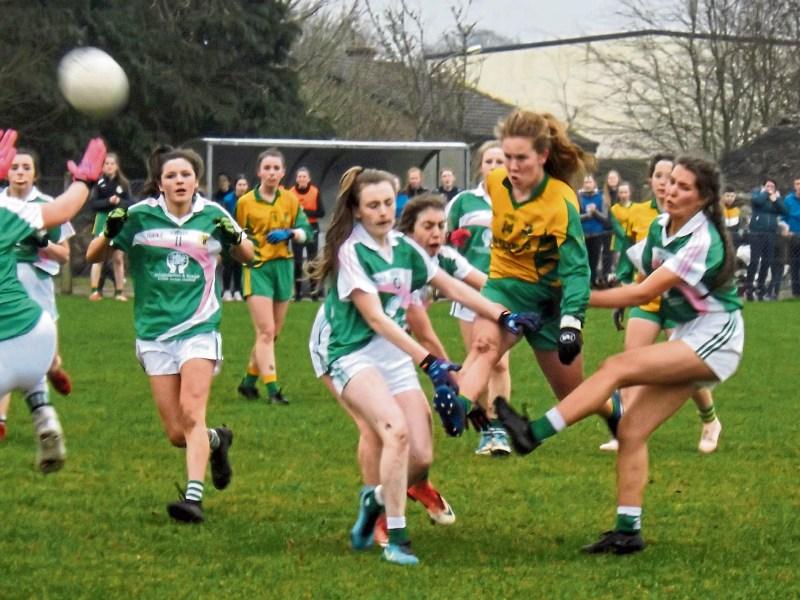 It goes down as a heart breaking defeat but rarely have the footballers of St Clare's shown so much courage, resilience and determination as they did last Thursday in Swinford.

Less than 21 hours after seven of the St Clare's starting 15 had lined out with the Manorhamilton school in an All-Ireland Soccer Final, they were back on the field to face fresh opponents and still they only fell a devastating point short of victory.

If ever there was a game that St Clare's could have thrown in the towel, this was it. For the entire first half, the Manor girls looked tired, leaden footed and just off their game as mental and physical tiredness were all too evident in their play.

Key players couldn't escape their markers, passes were dropped or missed their targets entirely as shots went sailing well wide or were blocked by a St Nathy's team who were fast, energetic and full of running.

Down seven points at the interval, St Clare's could have packed up shop and left but not this team and just like they did in the Junior B Final, they started to claw their way back into this contest.

An opportunist Leah Fox goal gave them hope, hope that looked shattered when Nathy's found the net a minute later. But that goal obviously stirred something and a minute later, Muireann Devaney drove a free at the goal that was parried out by the keeper before Devaney pounced for a goal.

With Devaney leading the charge with two points, one from a free, St Clare's cut the gap to two before a great team move ended with Leah Fox beautifully planting the ball in the net with less than five minutes to go.

Credit St Nathy's - rocked as they undoubtedly were, they steadied themselves and the outstanding Roisin Molloy scored a brilliant point just into added time. Hannah Johnston returned from her spell in the sin-bin but St Clare's couldn't create any chances, turning the ball over in heavy traffic the one chance they did get.

Molloy hit a free wide three minutes into added time but when she got the chance a minute later from her good side, the centre-forward made no mistake.

St Clare's tried to launch one last attack but the ball was turned over and St Nathy's won the day, narrowly.

The game had started in cagey fashion with both sides missing chances before Molloy and Devaney swapped frees. Nathy's were looking good and Ilana Philips and Molloy added points.

If there are regrets for St Clare's from this game, it was in this spell they occur. Nathy's keeper Sasha Lavin collided with a St Clare's player and then produced a truly wonderful full-length diving save, tipping Muireann Devaney's shot onto the base of the post.

The rest of the half belonged to St Nathy's unfortunately as Hannah Morrisroe and Pauline O'Grady messed up goal chances but they did have points from O'Dowd, Morrisroe & Lisa Powell with a Devaney free in response.

Defeat may have been St Clare's lot but they can hold their heads high after a brave and determined display.

TURNING POINT - Hard to pick one with St Clare's missing chances in the first half and St Nathy's making them pay. But the way Nathy's responded to St Clare's taking the lead with two injury time point was, in all fairness, worthy of winning this encounter.

TALKING POINT - The clash of an All-Ireland Soccer Final and a Connacht GAA Final does little to serve sport and  this writer is certain that even with just one day's extra rest, St Clare's would have emerged victorious in this encounter.

REF WATCH - Maybe it is a sign of a good referee that he annoyed both camps. Hard to argue with Kevin Corcoran's yellow card decisions but he should have penalised persistent and calculated St Nathy's fouling in the second half far more than he did.

HIGHLIGHT - Against all odds and seven points down at halftime, St Clare's fought back to take the lead with less that five minutes to go. What an immense effort from the Manor girls.

LOWLIGHT - Hard to escape the conclusion that a fully rested St Clare's would have won this game easily if they had even an extra day's rest. Doesn't say a lot for player welfare.