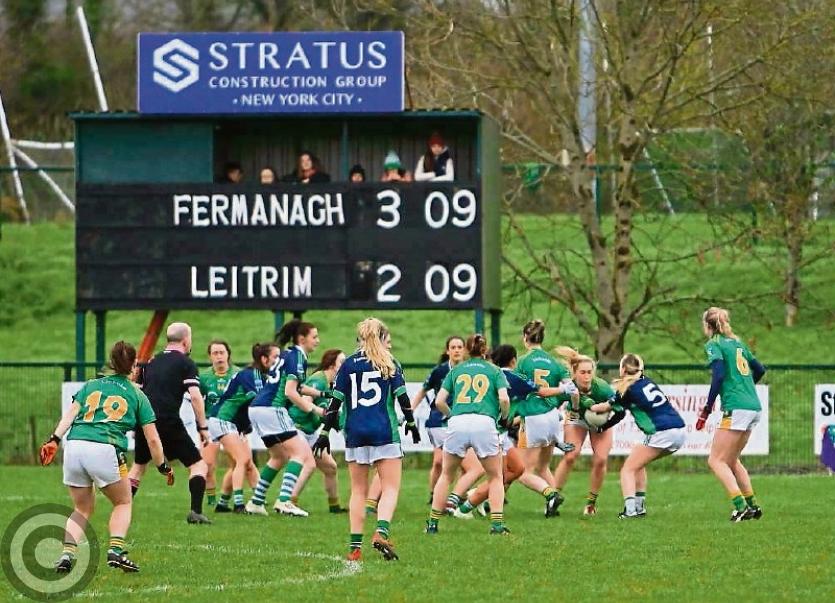 Leitrim’s hopes of reaching the Lidl Ladies NFL Division 4 semi-finals took a major hit last Sunday in Derrygonnelly when a clinical Fermanagh held off a second half rally from the green & gold ladies.

After suffering back-to-back defeats at the hands of Antrim and Louth, Leitrim needed an instant response but despite a strong second half rally and an improvement in many aspects of their play, their efforts ultimately came up short.

Slow starts have proved costly and within a minute of the throw-up Fermanagh found the back of the net, Lisa Maguire finishing from close range after the impressive Eimear Smyth had burned off the attentions of her nearest pursuers.

Leitrim replied almost instantly with Bronagh O’Rourke slotting over when Michelle Heslin was dragged to ground and a minute later the deficit was down to a single point after Eilish O’Dowd collected Heslin’s through ball and then fired it between the sticks.

The next three scores went the way of the Ulster side, Eimear Smyth with one from play and two from frees. Leitrim needed another response and with their shooting boots deserting them, four bad wides following the Fermanagh onslaught, Emma McGovern won her side a penalty when she was bundled over in the box with five minutes left in the opening half.

Bronagh O’Rourke stepped up to take the spot kick and despite the best attempts of Fermanagh goalkeeper Donna Owens, the ball found the bottom corner.

Unfortunately for Leitrim, the final two scores went the way of the home side, Aisling O’Brien tapping into the net following a high ball that deceived everyone, closely followed by another Smyth free leaving Fermanagh 2-4 to 1-2 ahead at the break.

It proved to be a much more entertaining second period and Leitrim started best, O’Rourke pointing a free before Carmel McGovern finished a good move in which Leitrim showed some rare patience to overcome the blanket defence in front of them.

Eimear Smyth proved to be the thorn in Leitrim’s side as she popped over to put her team four up and the killer blow quickly followed, Molly McGloin carrying the ball all the way from her own forty-five into the danger zone before popping off to Lisa Maguire who coolly slotted her second goal of the game.

Vivienne Egan got into the action with a well taken point before Bronagh O’Rourke got her fourth of the day, but Fermanagh’s captain Joanne Doonan opened her own account when completing an end-to-end move for the Ernesiders to extend their lead to six points with three-quarters of the game gone.

To their credit, Leitrim weren’t lying down and from the resulting kickout, with some excellent work from Aoife Gilmartin and in particular Carla Le Guen, Michelle Heslin blasted into the roof of the net. Game on, with one goal separating the two sides.

It was soon a two-point affair when O’Rourke converted another free but that was as close as it got, Eimear Smyth and Joanne Doonan adding to their tallies before O’Rourke again raised a white flag, this time from play when a goal was on but not forthcoming.

Smyth and O’Rourke traded scores before a frantic ending to the game in which Michelle Heslin suffered a head injury, the resulting throw-up yielding a goalmouth scramble that Leitrim couldn’t convert into a three-pointer.

MAIN WOMAN - For the home side, Lisa Maguire and Eimear Smyth did most of the damage, contributing 2-7 between them. Aoife Gilmartin, Bronagh O’Rourke and Carla Le Guen stood out as three of the top performers in green.

TURNING POINT - Lisa Maguire’s goal nearing the midway point second half put seven points between the sides and try as Leitrim might, overcoming that deficit proved to be an impossible one.

TALKING POINT - After an opening day victory against Derry, three defeats have followed but for a team who lacked any form of pre-season, there were signs that things could be about to click based on the second half performance but reaching the semi-finals will require some good fortune from here on in.

REF WATCH - Paul Burke let the play flow as best he could in what was a fiercely contested second half and seemed to get most of the major decisions right.

HIGHLIGHT - With both teams possessing plenty of strong runners, there were a number of fine counter attacks. Fermanagh’s opening goal came from what was perhaps the move of the match

LOWLIGHT - Leitrim  have struggled for form in front of the posts and despite tallying 2-9 on this occasion, more scores than they’ve managed in any of the previous three games, missed opportunities again paved the way for defeat.

WHAT NOW? Leitrim are back to home comforts against  in-form Carlow on St Patrick’s day and know that nothing else but a win will suffice if they’re to have an outside chance of reaching the league semi-finals.