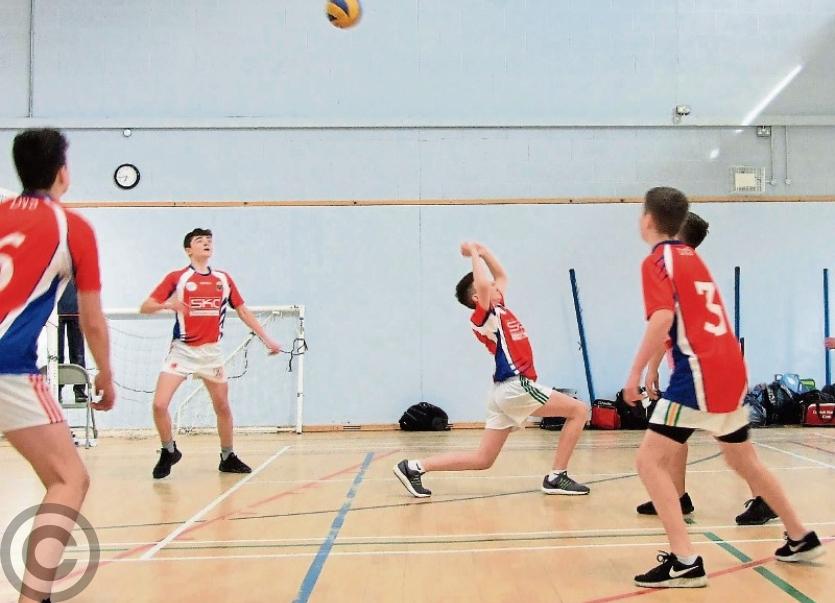 Drumshanbo's Cathal Guckian digs the ball back over his head

There was huge drama down in Mountrath last Monday when two unlucky losses put Drumshanbo out of the fight for the All-Ireland. Indeed things went south for Drumshanbo from the beginning.

A poor (dreadful!) start in the very first set gave Saint Brigid’s B a huge early lead. 2 sets later, Drumshanbo were playing sublime, inflicting one of the biggest set defeats ever on St. Brigids A! This topsy turvy style continued and the day ended in a welter of excitement as Drumshanbo rose yet again.

St. Brigid’s B are always excellent but, for the first set, and up to 3-9 in the 2nd set Drumshanbo A had not won one point on their own serve!

Then, at a time out. Hassan Deen Swarray came on, the team was restructured and, at 6-9, Brigids B made an error! The rot stopped. Dean Curnyn hit 2 winners and Drumshanbo clawed their way back up to 11-11, thanks to a series of good serves by Ciaran McMorrow. Still, first drama of the day: Brigids B served for match point at 14-13! Karl Winters kept Drumshanbo fighting with a powerful spike and 2 aces to win the second set.

Utter transformation occurred in the very next set. Drumshanbo played like champions. Cornyn served from 2-1 to 6-1. Winters placed winners, McMorrow spiked them and aces from Karl Foley put Drumshanbo 15-6 ahead. Brigids rallied but Michael Connolly, playing well, aced them to 20-10. Two McMorrow winners, and a Foley save, completed the route. Drumshanbo were up to 3rd place in the group.

This fantastic form continued in set two. Three Cathal Guckian serves made it 7-2 at a Loughrea time out. Winter’s spikes raced it to 11-6. As suddenly as the brilliance came, it went. Drumshanbo’s touch, including serves declined and the Galway school levelled by 12 and, from 18-16, took over. Oliwier Rygielski, showing great court sense, came on, but the set was lost.

Undaunted, the 3rd set started with 5 aces from McMorrow as Drumshanbo raced 7-0 ahead! Foley set Winters for winners to get to 10-5 and Loughrea called a time out down 9-11. Then Drumshanbo exploded badly as the sets went astray and, after leading 13-11, 2 points from qualifying, they failed.

The dark Drumshanbo returned! No score on their own serves in the first set or in the 2nd set until down 2-7 at a time out! Then, again, transformation. Serves by Caolan O’Connor brought them to 5-8 with Cathal McNamara setting well. They levelled at 9 and, playing simple, while the home school erred, they levelled at 11, 12 and 13.

The Laois school raced to 17-14. McNamara served 3 with Adam Casey saving a winner and Connolly hitting one. Winters served Drumshanbo ahead 21-19 and the huge bench was screaming support. It was neck-and-neck. In the end though, it wasn’t enough. Mountrath won the set, denying Drumshanbo a spot in the All-Ireland semi-finals.

Mountrath topped the group and ensured that there will be another new school in an A final. For Drumshanbo it sees the end of a run of 7 consecutive All Ireland A finals between the 3 ages. It was the best run of finals for the school since 1996 – a long time ago.