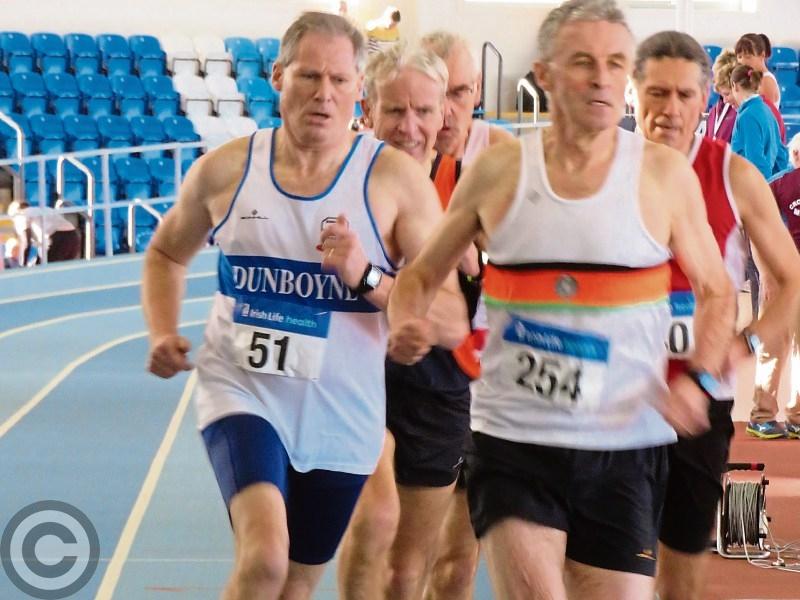 Michael Cornyn, wearing number 51, on his way to winning the M55 800m at the National Masters Indoor Track & Field

Leitrim athletes performed with distinction on road and track at the weekend with Olympians Breege Connolly and Colin Griffin both setting new personal bests over the half-marathon distance.

Carrick AC's Michelle Lannon brought home a silver from the National masters indoor track & field in Athlone on Sunday when she clocked a time of 11.37.84 to take the silver medal behind fellow international cross-country runner Jackie Carty.

Leitrim also had an interest in another medal as Ballinaglera native Michael Cornyn won the M55 800m title in a time of 2.26.59, his second in a row despite an injury hit season, to add to Scottish Masters 400m title won a couple of weeks ago.

Graham Allen was also in action in the M55 60m where he finished ninth in a time of 9.88 seconds but he was unable to finish the 3,000m with a recurrence of injury.

Colin Griffin also ran a big new personal best when he ran 70.12 when finished fourth in the Bohermeen Half-Marathon in Meath. With over 1,000 runners in action, Colin smashed his pb as he prepares for the Rotterdam Marathon on Sunday April 7.

Back in Longford, Carrick AC's Clive Glancy was third across the line and second man home in the Longford AC 10Km. Running a time of 33.47, Clive finished behind winner Barry Shiels of Longford AC (32.55) and former European cross- country champion Fionnuala McCormack (33.09).

In the 5Km race, Daniel Dill of Carrick AC finished fifth in a time of 19.13.