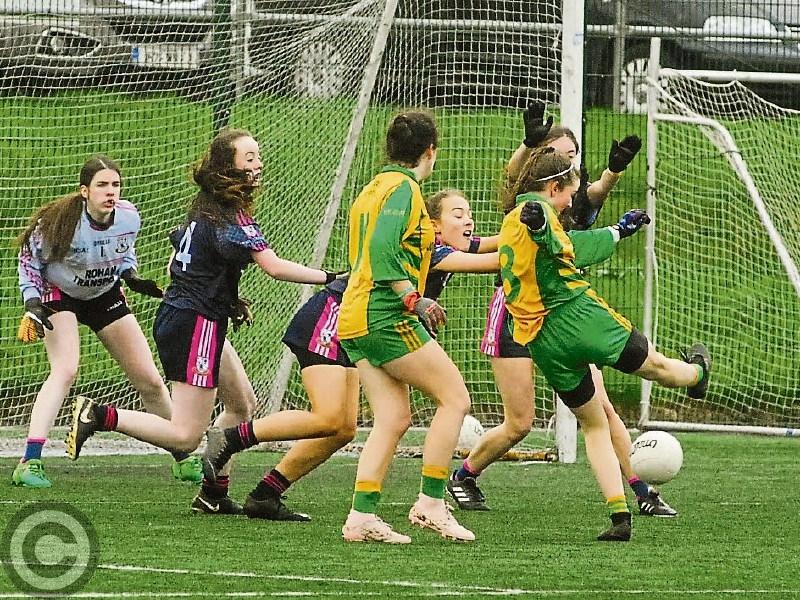 Dreams of back to back All-Ireland Ladies gaelic football titles for St Clare's died in St Loman's Mullingar last Friday but not without an almighty battle from the Leitrim school.

Up against a formidable Moate CS, St Clare's delivered a tremendous effort to reach the Lidl All-Ireland Junior B Final but they found themselves up against a team that just wouldn't quit and proved too good on the day.

It was a measure of St Clare's resolve and their own ability that they competed so well against the Westmeath school but over the course of the almost 67 minutes of action, there was no doubting that Moate were the better team on the day.

With some great ball players, Moate were mobile, strong and had forwards that caused St Clare's immense trouble - their tally of 2-14 is proof enough of that - and they restricted the Manor school's own potent attack.

Muireann Devaney was double marked throughout the game but with referee John Devlin of Galway clamping down on physical contact, it was further out the field where St Clare's had problems.

For much of the game, St Clare's simply couldn't get enough quality ball to Devaney or Leah Fox, so much so that both were reduced to going further and further back the field to gain possession.

When they did get good chances, St Clare's found Moate keeper Emma Quigley and her defence a formidable barrier, Quigley making a series of excellent saves to stop the sort of goals that the north Leitrim school normally thrive upon.

Two goals inside the first ten minutes gave St Clare's something to hold onto and they did that magnificently. But the pressure of the Moate siege was simply too much for the defence to hold out against.

St Clare’s got off to a perfect start when a Muireann Devaney free fell short in the Moate goalmouth. Rachel Conlon gathered the loose ball but saw her shot kicked clear but the clearance was blocked by Emma McGloin with the ball ending up in the net.

Moate hit back with two points from Megan Clinton and a Shannon Mulvihill free within the next three minutes but then Leah Fox scored a good point after a strong run on eight minutes. Mulvihill came back with a free before St Clare’s hit what seemed like a killer blow.

Devaney played a one-two with Leah Fox as she took off on one of her typical mazy runs before blasting the ball to the net, quickly adding a point a minute later to put St Clare’s five points clear.

St Clare’s had a let-off when Aine Gaynor was clearly fouled on her way through but Mulvihill drove the penalty high over the bar.

The theme of missed goal chances for Moate was to continue as Aoife Dalton hit three unanswered points and in all three cases, goals were on, goals that Devaney or Fox would have taken.

Moate also kicked a couple of wides while Chloe McPartlin made a good save from Annie Heavin but it was St Clare’s who finished the half strongly, Rachel Conlon putting over a good free while Moate keeper Emma Quigley dropped a long range shot.

That left St Clare’s with a 2-3 to 0-7 lead at the break, quickly extended when Leah Fox drove a shot high over the bar when a goal looked on. Aine Gaynor pulled back a point but missed a free while Moate keeper Quigley made a superb save to deny Devaney a certain goal.

Gaynor tapped over a free before Quigley denied Leah Fox with a smart catch while Devaney missed a free.

That miss prove costly as Moate went the length of the field with a great move on 15 minutes. It looked as if the chance had gone with a long pass but captain Aoife Dalton kept the ball in play, turned back and then hammered the ball to the far corner.

That put Moate two up and a Gaynor free, after St Clare’s had won a free but dissent saw it turned to a throw-ball, won by Moate and then moved in for more dissent, put them three clear with just ten minutes to go.

But St Clare’s refused to go quietly - a brilliant Devaney run from midfield ended with a thunderbolt to the net and a minute later, Rachel Conlon pointed from space and St Clare’s were back in front.

The lead was extended by a great Devaney point following good work from Rachel Conlon but from then on, Moate took over. Aine Gaynor’s only score from play was almost a goal as her shot struck the crossbar.

With Moate pouring forward, indiscipline was costing St Clare’s and frees from Gaynor and Mulvihill edged them in front as the game went into added time and Megan Clinton put them two up as Moate retained the ball well before the midfielder scored.

Devaney, clearly limping, put a free wide four minutes into added time and showing the sort of killer instinct that St Clare’s usually possess, Moate made sure of the win when they broke upfield nearly six minutes into added time. The first shot was blocked but Shannon Mulvihill killed off the game when she drove the rebound into the far corner of the net.

MAIN WOMAN - Muireann Devaney was again immense for St Clare's but their over-reliance on her came back to haunt them. Rachel Conlon in midfield and Hannah Johnston also put in great performances for St Clare's while the defence as a unit worked extremely hard under a lot of pressure. Moate had several players in contention for player of the match with Shannon Mulvihill, Aoife Dalton, Roisin Killian, Megan Clinton and keeper Emma Quigley impressive but it was midfielder Aine Gaynor who carried the Westmeath school to the win and a place in the All-Ireland Final.

TALKING POINT - St Clare's had ridden their luck in the Connacht Final but won out. Here, unfortunately, they came up a team just as resilient, just as determined and with just as many quality players as they themselves possess. It was a close run thing but you'd have to say that the better team on the day definitely won and there is no shame in losing to a better team.

In fact, it is a testament to St Clare's that they came so close to the Westmeath school and were actually leading until the game went into added time.

TURNING POINT - In a game where Moate dominated a lot of possession and kicked a lot of scores, hard to pick one   as despite leading this game for long periods, it was Moate who forced the pace. But if there was one incident that sent St Clare's hopes south, it came when Muireann Devaney suffered a leg injury in the final ten minutes, an injury that restricted her hugely.

REF WATCH - Referee John Devlin of Galway came in for sustained criticism from St Clare's supporters after the game but apart from one soft free for Moate towards the end, the match official was consistent throughout the game in his decisions, as difficult as they might have been to take. A debate can be had over the differences in interpretation between referees. Devlin was strict in the no-contact rule and applied it  to both teams but it was clear that Moate adapted far better to Devlin's approach than the Leitrim girls, more used to referees who allow more physical contact in their previous games, particularly the Connacht Final.

HIGHLIGHT - With ten minutes to go, Muireann Devaney took off on a typical barnstorming run from the middle of the park. And it ended in typical fashion too with Devaney driving the ball to the back of the Moate net to tie the scores.

LOWLIGHT - The sight of a limping Muireann Devaney trying to carry on in the closing stages only served to illustrate just how much St Clare's were reliant on their inspirational leader. Once Devaney was unable to trouble the Moate defence, the Westmeath school hit an unanswered 1-4 to seal victory.