All set for the Midland Moto Rally 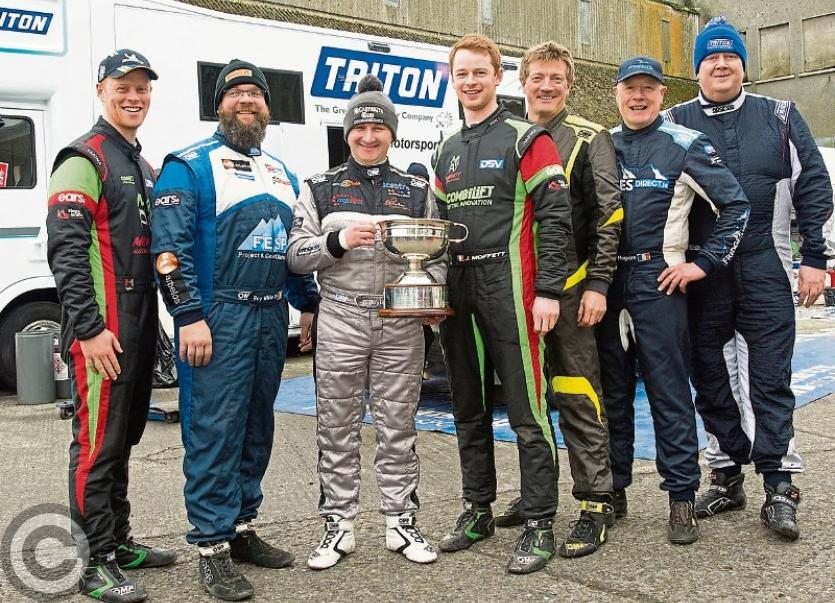 Sam Moffatt (left), who won the Midland Moto Rally two years ago pictured with the title contenders in this year's series

The Admore Air Conditioning Corp Midland Moto Rally in Longford on Sunday next will feature a strong entry including reigning and several former national rally champions for the nine stage rally that is hosted by the Midland Motor Club with Jeremy O’Connor as clerk of the course.

The acquisition of a new title sponsor is a great boost to the organising Midland Motor Club and has come through long time club supporter Paul Rowley, who heads the New York based company.

Paul is originally from Killoe but has lived in New York for the last thirty three years. He is a regular competitor in Irish rallying and first competed in the Midland Moto Stages Rally back in 1985. On Sunday’s nine stage encounter Paul will campaign a PCRS run Ford Fiesta R5. His reason for underpinning the rally is based in recognition of all the volunteers that run the club and the marshals that give of their time to ensure that rallying continues.

The Longford Arms Hotel, headquarters of the event are also supporting the event.

Two years ago Sam Moffatt won the event and went on to claim the Triton series and the Vard Memorial Trophy. However, the Monaghan driver is not contesting the nine stage rally.

The Moffatt family will still be ably represented as his younger brother Josh, a winner of the opening Triton round in Abbeyleix is on the entry. He will be seeking to follow in the footsteps of his brother and win the Triton series for the very first time. Josh has won the Irish Tarmac Championship and the Irish Forest series but so far, the Triton National series has eluded him.

The entry list has all the major national championship contenders including triple national champion Donegal’s Declan Boyle (Ford Fiesta WRC), who was second on the opening round in Abbeyleix and will begin in Longford just a point behind Josh Moffatt.

Another former champion Clonmel’s Roy White, also in a Ford Fiesta WRC, recovered to finished third on the opening round, two years ago on this event, he was runner-up to Sam Moffatt. White will need to stay pace with his rivals as he chases that elusive win.

It is hard to believe that is it some 27 years since Warrenpoint’s Peadar Hurson won the national series, he remains ultra competitive and has won many events in the intervening years and remains a threat in his Fiesta WRC.

The list of past national champions continues with popular Monaghan driver Niall Maguire (Subaru WRC), the first to win three titles, also on the Midland entry. He remains a great supporter of national rallying and in this year’s opening round in Abbeyleix came home seventh overall.

In the Motorsport Safety Team Group N category former champion Shane Maguire will have Trevor Bustard and Neil Tohill as opposition along with Tomas O'Rourke and the similar Mitsubishi EvoIX car of Sean Gallagher & Shane O’Rourke who are aiming to claim local honours.

Prior to the event, mechanical scrutiny take place this Saturday from 2pm until 7.30pm at Mastertech Business Park, Athlone Road, Longford. On Sunday, the first car away from Pairc Ferme at the old army barracks at 9.10am with the finish ramp celebrations at Main Street, adjacent to the Longford Arms Hotel at 5 pm.