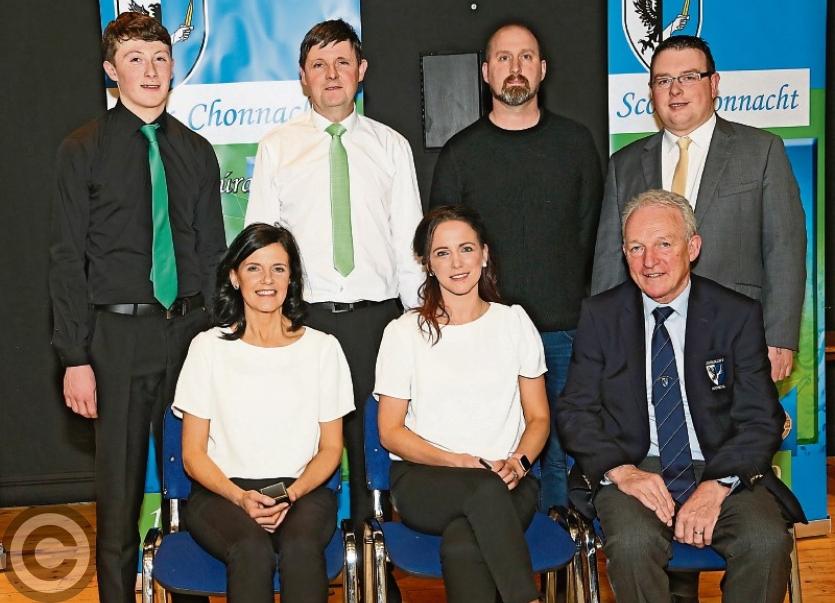 There were titles for four of the five counties competing at the Connacht GAA Scór Sinsir finals, which were held in Balla Community Centre on March 10.

The first result to be known in any Scór competition is the Tráth na gCeist and this year the title went to Claremorris of Mayo as they outscored Galway champions Mellick Eyrecourt, Bornacoola of Leitrim and Roscommon champions Elphin. Sligo were unable to take part.

Despite some fantastic answering in the second half, reigning champions, Claremorris, were first to cross the finish line on a scoreline of 62, followed by Roscommon on 53 points, while both Leitrim and Galway finished on 44.

Following the quiz, supporters had to wait patiently until after the Set Dancing to find where the remaining accolades were destined for!

As the final deliberations were being made by the adjudicators, Jamie Ó Tuama, new appointed Oifigeach Forbortha na Gaeilge in Croke Park, acknowledged the work carried out by the various Coistí in the province.

The first result of the evening was the winner of the Cormac McGill Cup which is presented each year to a Connacht county in recognition of its participation and success in the Connacht Final.

This year, for the first time, the title went to Roscommon. The cup was presented by John Murphy to Michael Gunn, Chairperson of the Roscommon Scór Committee.

In Figure Dancing, the competition that got the event under way, St. Dominic’s claimed the honours. Dancing the “Eight Hand Reel” they defeated Leitrim's St. Mary’s.

Ballinderreen from Galway claimed the only Galway title when Michael Burke won the Solo Singing competition, seeing off Sinéad Egan from Aughnasheelin

Next up was the Instrumental Music competition and the title went to home side Achill, playing a jig and two reels.

Then it was on to the second “solo” competition; Recitation / Storytelling and the audience was treated to five very enjoyable pieces. In the end the title went to Roscommon champion Michael Rock, of Elphin, for his own original piece entitled “The Shop” which illustrated the decline of rural Ireland.

There were great cheers from the large Leitrim contingent in attendance when the result of the next competition, Ballad Group, was announced as the title went to Aughnasheelin – the reigning champions. They sang “The Old ,Man” and “The Blarney Roses” to win the title.

Roscommon claimed their third title of the afternoon in a closely contested Léiriú competition courtesy of Elphin with a hilarious sketch entitled “Roscommon T.V.”

In the last competition of the day, Set Dancing, Aughamore won Mayo's second title of the day for a second year running. Dancing two figures of the "Plain Set," they defeated Roscommon champions Elphin and Aughnasheelin from Leitrim.