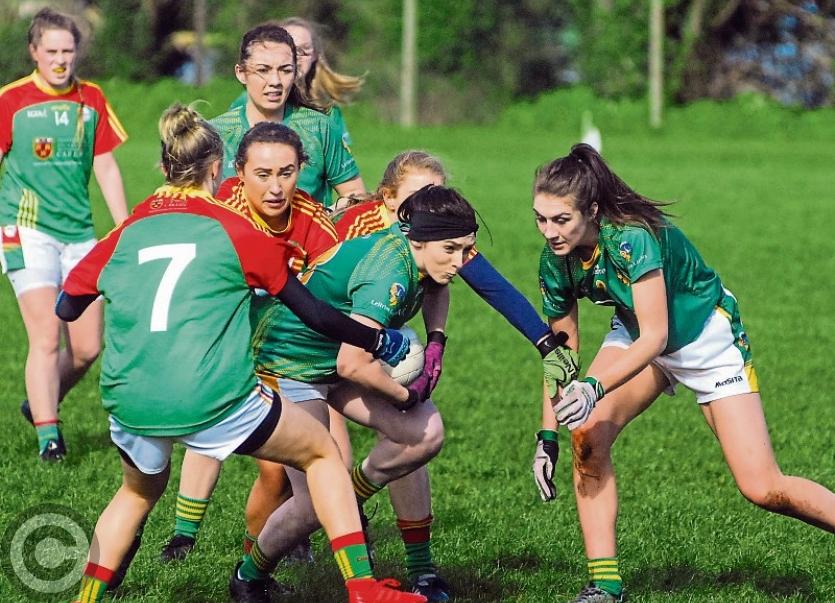 On a weekend when they lost their manager, Leitrim effectively lost hope of reaching the Lidl Ladies NFL Division 4 semi-finals when a clinical Carlow proved too strong in Mohill.

Leitrim’s return to the football field this year has been a bumpy one with just one victory against Derry to show their efforts and Sunday’s loss to Carlow leaves them seventh in the Division 4 table with just two games to go.

The loss, or parting of ways, with manager Gavin Cawley last Saturday night didn't bring an immediate improvement in form on Sunday while the issue of absent players continues to rear its head for the ladies county team.

With six points available for Leitrim in their last two games against Kilkenny and Limerick, Leitrim find themselves four points behind Louth and six behind Limerick with the Munster side needing just a point to make it impossible for Leitrim to reach the semi-finals.

Qualification is not mathematically impossible but with Louth having a game in hand and Limerick favourites when they face strugglers Derry in their next game, it looks all but impossible for Leitrim to reach the knockout stages.

Leitrim needed a victory to keep their hopes alive of reaching the semi-finals and possibly a push at promotion back to Division 3 but from the off, Carlow set the tone for the game and were worthy and comprehensive winners.

Leitrim can rightly point to missed chances, particularly two goal chances either side of halftime, but the truth is that the home side didn’t have the structure and organisation that a Carlow team missing four first teamers possessed in abundance.

In Lauren Dwyer, Carlow had the sort of forward that have decorated Leitrim teams over the past 15 years, incredibly skillful on the ball and a real goal threat any time she got the ball and Leitrim never truly got to terms with the corner-forward.

But what truly impressed about Carlow was their structure and their ability to hold onto the ball and Leitrim, as hard as they battled and worked last Sunday in Cloone, just didn’t have that in their game last Sunday.

Eilish O'Dowd was superb throughout the hour while Edel Shanley, Clare Owens & Laura O'Dowd put in great work and keeper Michelle Hackett couldn't be faulted for any of the goals but there remains a lot of work for Leitrim to do.

Carlow showed they meant business with a blistering opening that landed 1-3 to no score against the wind in the first five minutes along with two other wides. The impressive Lauren Dwyer got the ball rolling with a point after just 20 seconds.

Dwyer and Cliodhna Ni Se missed good chances before Antoinette Dowling surged upfield, her first shot blocked but she drove the rebound high over the bar. Leitrim tried to hit back but saw Vivienne Egan firing well wide of the posts.

Carlow struck a critical blow in their eventual victory four minutes in when Leitrim lost the ball in attack, leading to a long run from Cliodhna Ni Se. A long foot pass found Lauren Dwyer who turned the last defender and blasted past a helpless Michelle Hackett for a brilliant goal.

From the kickout, Roisin Byrne fired the ball back over the bar to put Carlow six points clear after just five minutes and a shell-shocked Leitrim took time to recover with a Vivienne Egan free on ten minutes after a foul on Shauna McGrath their first score of the game.

McGrath hit a wide before Egan tapped over another free but Ni See fired over a free on 16 minutes while the same player blasted a shot across the face of the Leitrim goal in a real let-off for the home side.

Leitrim, however, were starting to find their feet - a great move going through five or six hands ended with Laura O’Dowd firing over the bar. Carlow had now started to miss chances with Dwyer seeing a shot come off the post while Egan also was off-target from a free.

Edel Kelly fired over the bar on 21 minutes after a move that came with a bit of luck as a Leitrim player played the ball on the ground and almost straight from the kickout, Egan scored a lovely well taken point to cut the gap to a point.

Crucially, Leitrim’s two best chances to rock Carlow came either side of halftime - Laura O’Dowd surged through but her shot went inches wide of the left hand post, sending the sides into the halftime break on a 1-4 to 0-5 scoreline.

Incredibly, another great goal chance fell to O’Dowd a minute into the second half and she was closer this time but unfortunately her shot skimmed the outside of the post in a real let-off for Carlow.

Eilish O’Dowd surged through the middle in the second minute to cut the gap to a point while a Vivienne Egan free fell short and Dwyer steadied Carlow with a well worked point.

Leitrim, now playing against the wind, kept looking for the goal that would ignite their challenge but Clare Owens saw her shot tipped over the crossbar by Carlow keeper Nicole Henry.

To make it worse, Carlow went straight down the field and Dwyer curled over a brilliant point after a lightning counter-attack. And Carlow drove the dagger home on nine minutes when Cliodhna Ni Se finished off a brilliant move down the right wing.

A reeling Leitrim were stunned and Dwyer put the game beyond Leitrim over the space of three minutes, first converting a free on ten minutes before she managed to keep a long ball that seemed to be going out of bounds in play before chipping a great shot over a helpless Michelle Hackett.

Leitrim were shocked and would not score for the rest of the game but Carlow would only add two further points themselves, the first from Laura Regan while Ni See would add a free five minutes from the end.

Carlow’s Edel Hayden and Dwyer both saw shots hit the woodwork while Eilish O’Dowd had a wide for Leitrim as the game petered out.

Main woman - Lauren Dwyer was the outstanding player on the field; for Leitrim Eilish O'Dowd, Clare Owens and Edel Shanley did best.

Talking Point - Leitrim's promotion hopes are all but over as with two games left, all Limerick need is a point and the top four cannot be caught.

Ref Watch - Kevin Corcoran annoyed both teams with his calls on overcarrying but he was consistent throughout.

Highlight - Leitrim's surge before halftime gave the fans hope a victory was possible.

Lowlight - Leitrim's finishing really let down in this game.