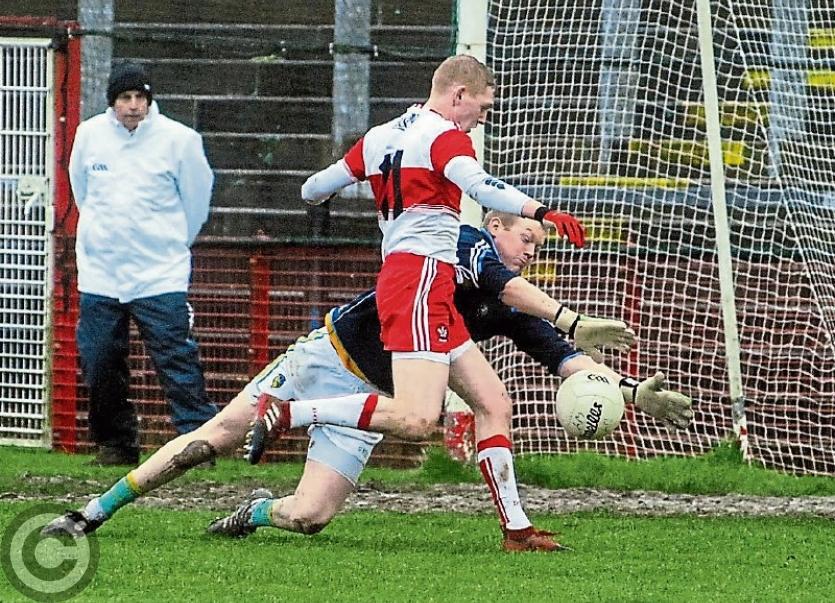 It was a dress rehearsal for the final in Croke Park on March 30, and unsurprisingly there were plenty of changes – with only six Leitrim men retaining their starting place from the win against London.

With the elements making things difficult in the first half, there was little to choose between the teams as the Oak Leaf went in one point to the good, but it was the second period when Damian McErlain’s men really turned on the afterburners.

They hit the first eight scores, including a goal from McGuigan, and while their opponents brought it back to five points, a second major from the St Mary’s student ensured that the two points stayed in Derry.

Heavy rainfall and a blustery wind made things difficult early on, but it was Leitrim who started brightest when Darragh Rooney popped over an offensive mark inside the first minute.

Christopher Bradley responded with a free before Rooney added his second mark after getting on the end of Oisin Madden’s floated ball.

Derry took the lead for the first time with another free when Jason Rocks was hauled down from behind, and Bradley split the sticks to make it 0-3 to 0-2.

On 14 minutes, the home side extended their lead to two from another free with McGuigan made it look easy from 40 metres out, hugging the right touchline.

Leitrim responded with a free from Emlyn Mulligan before the first score from play arrived on 16 minutes. It was a lovely effort from midfielder Shane Moran who fired over from distance with the help of the inside of the left upright – 0-4 apiece.

The visitors took the lead again on 17 minutes when a free was floated in from 45 metres by goalkeeper Cathal McCann, and Moran rose highest to claim it on the edge of the square before turning sharply and firing just over the crossbar, rather than under.

A Niall Keenan point ended a seven minute spell without a score in the game before Fergal McTague advanced from full-back to hit a monstrous effort from outside the ’45.

Cathal McCrann then denied Shane McGuigan, who turned Flynn under pressure before shooting straight at the Leitrim goalkeeper.

The Oak Leaf levelled matters once again on the half hour mark when Rocks supplied Conor Doherty who passed it off for McGuigan to score before Bradley added another free.

On 33 minutes, Derry had their best opportunity yet for a goal when Cathal McCrann slipped while taking his kick-out. It went straight to Rocks and the Oak Leaf immediately broke, with McGuigan finding club mate Bradley off the shoulder, but the Leitrim goalkeeper recovered to make a huge save.

McGuigan popped over his fourth of the day from 30 metres, before Rooney rounded off the first half scoring at the other end with his third offensive mark.

That left Derry 0-8 to 0-7 ahead at the break and both teams made two changes at halftime, with Padraig Cassidy and Padraig McGrogan coming in for Derry, and Sean McWeeney and Gary Plunkett making an entrance for Leitrim.

It was the home side who started on fire, however, with Conor McAtamney, Bradley (2) and McGuigan all hitting points to open up a five point gap for Damian McErlain’s men.

They then got the crucial first goal when a Chrissy McKaigue free from midfield evaded the Leitrim back line, and McGuigan nipped in, threw a feint, and finished to the empty net.

Conor Doherty and McAtamney strengthened the lead before the visitors eventually got their first score of the half, and a crucial one for their confidence, as Emlyn Mulligan picked out substitute Plunkett down the right, and his shot deflected past Ben McKinless off Brendan Rogers for a goal.

Mulligan and Bradley exchanged points before Cillian McGloin knocked over his first of the day.

Their momentum was ended on 64 minutes when McGuigan fired home his second goal after Leitrim were caught in possession high up the field.

Domhnaill Flynn sent over a free from the angle to round off the scoring, but it was little more than a consolation as the Oak Leaf took victory and maintained their 100% record.

MAIN MAN - Shane McGuigan was sensational for Derry and the Leitrim full-back line simply couldn’t find a way to handle him. His skill for the first goal and his determination for the second helped the home side into a comfortable lead, and he also fired over five superb points.

TALKING POINT -The big talking point at the end of the game was how much influence would this result have on the final? It’s a confidence boost for Derry, and many in the stands remarked afterwards that they would have enough to take the title, but Leitrim kept plenty of cards up their sleeve.

TURNING POINT - After such a nip and tuck first half, Derry came out of the blocks flying in the second half with the wind at their backs and after hitting four points, they found the net through a lovely Shane McGuigan finish to put daylight between the sides.

REF WATCH - Patrick Maguire didn’t have too much to deal with given the low tempo of the game. He did miss what looked like a clear-cut Derry penalty and there were a few controversial tackles, more so down to the slick surface than any ill intent, but the man in the middle generally dealt with things accordingly.

HIGHLIGHT - Derry had a great opportunity of a goal in the final embers of the first half and with the game hanging in the balance. A poor Cathal McCrann kick-out allowed Derry to break forward, but the keeper produced a brilliant save to deny Christopher Bradley.

LOWLIGHT - Perhaps what will be most disappointing for Leitrim was their lack of fight in the early stages of the second half. The Oak Leaf hit eight scores, including a goal, before Terry Hyland’s men opened their account, and it left them with too much to do.

WHAT'S NEXT - It was clear coming into this game that neither team would be keen to show their hand ahead of their meeting in Croke Park on March 30, and between the two they made 17 changes from their last games. Little was learned in a scrappy encounter.