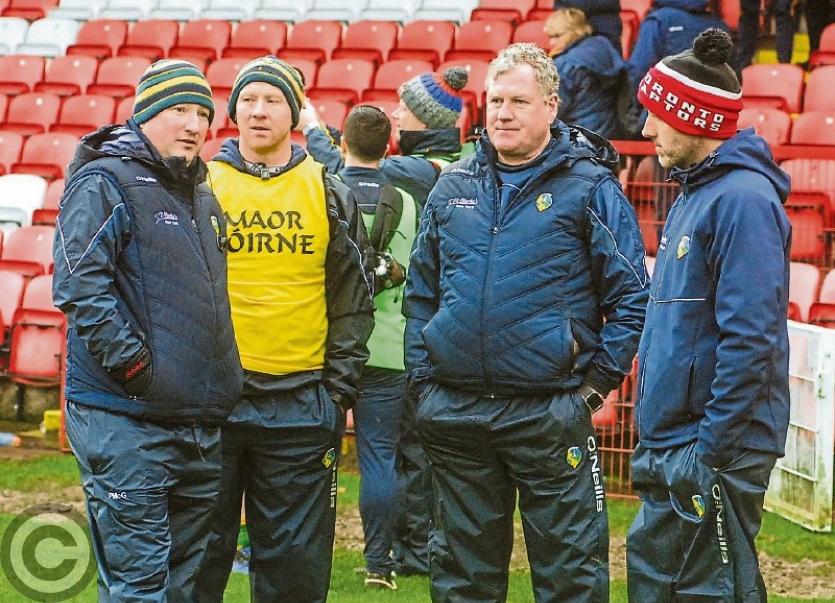 Leitrim manager Terry Hyland pictured with some of his backroom team after the loss in Derry. Photo by Willie Donnellan

Terry Hyland admitted that Leitrim made too many basic mistakes as they fell to Derry in a wet Celtic Park on Saturday afternoon in their first loss of this year’s Allianz League campaign.

Leitrim were just one point behind at halftime with a much changed team but a poor start to the second half during which the Oak Leaf scored 1-5 before Leitrim registered their first score allowed their opponents to inflict the first defeat of the league season on Hyland’s men.

“We were well in it at half-time, but the biggest problem for me was the basic errors that we made. There was simple stuff that you shouldn’t really be making at this level, and that cost us in the game,” insisted the manager. “The scoreline was probably a bit kind to us in the end. We could have been worse off because they didn’t capitalise on some of their chances.

“We had six or seven fellas starting that hadn’t started before, and it probably knocked the team out of balance a bit.”

Both sides made two changes at half-time, and Hyland felt that it was Derry who benefited more from that, particularly with the entrance of Slaughtneil’s Padraig Cassidy at midfield – though Gary Plunkett did also make an impact as he hit a goal later in the second period.

“They got a handle in midfield and they had a platform to build from then. In saying that, if you look at the goals that they scored, they were balls that we should have dealt with comfortably and we didn’t,” stated Hyland.

“For the second, we were yards up the field, we don’t take control of the ball and the next thing they have it in the net. Look, they’re mistakes that we can go away and work on now.”

With conditions less than ideal in the Derry City venue due to heavy rainfall and a blustery wind, Hyland was unwilling to blame his side’s broken play at times on anything other than their own errors.

“The conditions were the same for both teams, and I’m not one to make excuses,” he said. “The conditions can cause some mishandling, but sometimes mistiming is as big of a problem as the conditions, and I think our timing was slightly off today.”

Hyland opted to make nine changes to the team that faced London in the promotion clinching game a fortnight ago, and the manager admitted that Saturday’s game was all part getting players game time without showing Derry too much of their hand ahead of the league final between the pair.

“I thought Conor Reynolds and Oisin Madden did quite well. We made two substitutions at half-time and then saw what we could do after that, but it was always about seeing lads and getting lads out there to see how they would react.

“From that point of view, we got what we needed from the game. Lads like Oisin Madden and Nicholas McWeeney have been injured up until two weeks ago, so they have been rehabbing and rehabbing, so they’ve had no football in them at all.

“Conor Reynolds was in the same situation, and it’s good to get them game time. From that point of view it’s good for them to get those minutes that they haven’t had all year.”

Leitrim now turn their attentions to the final league game against Waterford this Saturday, and Hyland agreed that they will approach it in the same way that they did their encounter with Derry – with rotation a big part of the plan.

“As we said coming into this game, we did start a lot of boys to get a look at them, and there will be two or three this weekend now too,” admitted the manager. “We just want to get game time for them fellas, because there’s no point carrying lads on a panel if they aren’t going to get game time.”