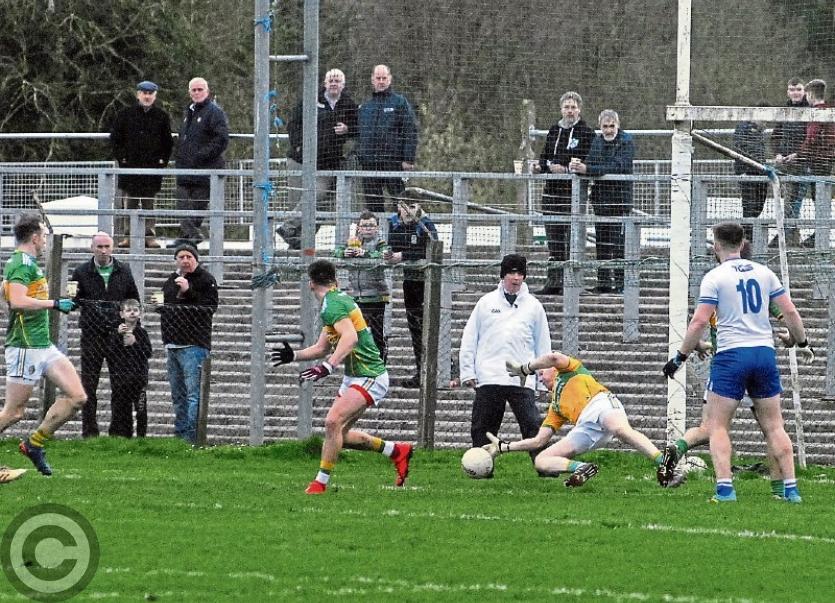 Leitrim keeper Cathal McCrann gets his hand to a low Waterford shot to prevent a goal during the first half last Saturday Picture: Willie Donnellan

We've almost become blasé in Leitrim about running up big scores when the big topic of conversation after a facile victory is not the incredible scoring tally registered in Avantcard Pairc Sean Mac Diarmada but the worry caused by the goal chances created by Waterford.

Leitrim's tally of 1-20 has only been surpassed in the last 12 months by the 25 points scored against Louth in the All-Ireland Qualifier and equalled by the 3-15 scored in the league against Wexford back in January and a truly excellent display of accuracy and efficiency.

Perhaps it is down to the new horizons opening up in front of Leitrim football - a Division 4 final next Saturday in Croke Park (3pm throw-in) and a chance to win a rare piece of national silverware - that certainly concentrates the mind!

If the expectations of fans have risen, so too have those of the players with a few commenting unhappily about the two goals Waterford did get and the host of other chances that were only repelled thanks to the intervention of Cathal McCrann.

But just how much do we read or should we read into this contest?

Waterford's attacking may have caused the centre of Leitrim defence problems but their own rearguard was plundered as easily as the Vikings sacking a monastery so which do you heed most, what do you ignore.

Leitrim's forwards had a field day but they'll be the first to admit that they enjoyed the freedom of the park with very loose marking. Yet that doesn't diminish the intensity they brought to creating turnovers in the first half in particular.

Certainly Leitrim won't get the scores as easily as they did last Saturday but they won't give up the goal chances they did either.

In truth, this was a no-win game for Leitrim and it must have been hard for players to go full tilt knowing that they could be putting their place in the team for Croke Park in danger with a bad knock or collision.

Nevertheless, there were some things we learned - given space, of which there is a lot in Croke Park, Leitrim forwards can run up a big score - it will certainly have been noticed up in Derry.

But perhaps the biggest thing we learned is that Terry Hyland has a devilishly hard decision to make this week, not that he is shirking hard decisions, when it comes to picking a goalkeeper for Croke Park.

Diarmuid McKiernan had been impressive in the first five league games and made very, very few mistakes but the Allen Gaels man finds himself under immense pressure from Cathal McCrann for the jersey.

The Gortletteragh man returned late to the panel but such has been his form against Derry and Waterford that there is a good chance McCrann will start on Saturday in the final - it is a decision I wouldn't wish on anyone but Terry Hyland has a big call to make.

McCrann made three brilliant first half saves to prevent certain goals and another two in the second half and was Leitrim outstanding performer.

Evan Sweeney and Emlyn Mulligan weren't too far behind either as both are pushing hard for starting spots while Conor Cullen's first start of the campaign was impressive but may not be enough to dislodge the incumbents.

Yet this is exactly what Terry Hyland wants - a squad with options in every position and every man pushing as hard as they can to get a starting jersey.

Leitrim started strongly last Saturday, an off the ball foul on Emlyn Mulligan leading to a successful Ryan O’Rourke free, followed quickly by a Mulligan point after a bad kickout was intercepted inside three minutes.

Conor Cullen set up Ray Mulvey for a good point while Waterford keeper David Whitty made a fantastic save to deny Mulligan a goal after good work from Evan Sweeney.

Mulligan converted the resulting 50 before Sweeney did his Croke Park hopes no harm by making a fantastic catch in the area and working his way out to score.

Waterford’s first score came on 12 minutes, a Shane Aherne free after a great Conor Murray run through the defence that should have yielded a goal. O’Rourke responded with a fine point, Shane Moran was booked for a clumsy high challenge and David Hallihan pointed after a strong Dylan Guiry run.

Sweeney and Murray swapped points before Conor Cullen swept over a score. Jason Gleeson & Domhnaill Flynn (free) traded points before another great run through the middle almost resulted in a Waterford goal.

Waterford were made pay for the miss as a long ball was fielded by Sweeney and cleverly worked back to Ryan O’Rourke who drilled the ball straight to the net.

The second half was a much more sedate affair with Leitrim missing a few early chances while Waterford had a goal disallowed when Dylan Guiry was judged to have kicked the ball from the grasp of Cathal McCrann following a good save by the keeper.

Two J.J. Hutchinson points, one from a free, narrowed the gap before Mulligan scored a great point. Conor Cullen blasted a 50 yard effort over the bar on 12 minutes but that was followed by an eight minute spell without a score.

Waterford finally got the goal their efforts deserved as the impressive Guiry bursting through a challenge and charging through the middle. McCrann made the first save but Guiry was able to force the ball home from close range.

O’Rourke (free) and Hutchinson swapped points before another sub Niall Brady got on the scoresheet with an excellent point from a tight angle after his first shot hit the woodwork.

Leitrim would add further points from Emlyn Mulligan and Ray Mulvey but the final word fell to Waterford when Michael Curry spun nicely in the goalmouth to get through the cover and blasted to the net from close range for a second Waterford goal.

Highlight - 21 scores, 16 from play, is an awesome return for Leitrim

What's next - Leitrim face Derry in the Allianz League Division 4 Final in Croke Park next Saturday, March 30, at 3pm.