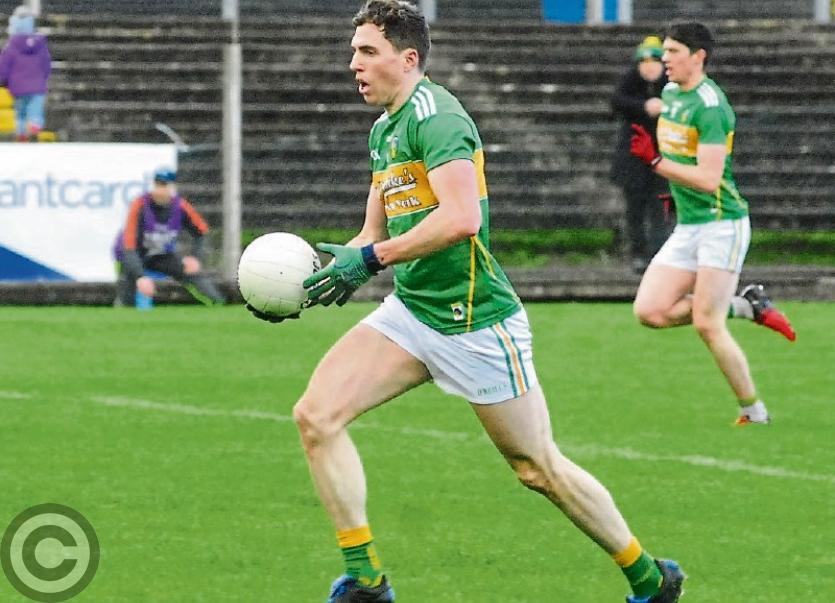 It has been a case of third time lucky for Leitrim’s Ray Mulvey as he has this year resurrected his Leitrim career and given a glimpse of the performances the talented sportsman has always been capable of.

An accomplished athlete, Ray won numerous All-Ireland medals in athletics and was once selected to run for Ireland while his sporting talent also shone on the soccer field where he represented Sligo/Leitrim in the prestigious Kennedy Cup.

Now 30-years-old and in a team full of youngsters, Ray is enjoying a new lease of life with the Leitrim footballers having previously been involved in 2010 under Mikey Moran and John Morrison and in 2013 with Sean Hagan.

Casting his mind back to his previous stints in the Leitrim jersey and looking for similarities the St Mary's man said: “It’s a long time since I have been involved. It was 2010 when I was last involved, I went back for a little while in 2013 but never stayed at it. It was similar back then but it is a very relaxed set-up to be involved in now; there is a quiet confidence about everything.”

Nine years later Ray has plenty of good memories from his first stint in the green and gold jersey, even though results may not have gone as he would have liked.

When the names of Moran and Morrison are mentioned it is clear the respect for both men endures: “They were good to work with. They were the first of their kind around here, they were very professional in everything they did and they were nice men away from it as well. They always had a word of advice if you needed it.”

Ray is the first to admit he may not have always had the required dedication to truly fulfil his inter-county potential but with age comes wisdom and he has grabbed his third opportunity with both hands.

“I am 30 now so it was a case of now or never. Once I got the call I was delighted to go back. I had that drive when I first joined but that kind of went away from me. I got injured and was out for a year or two and never really had the motivation to go back to it until now. I’m making the most of it now and it’s going well at the minute.”

A trip to Croke Park has captured the imagination of the county and indeed those further afield but Ray insists Croke Park is simply a bonus for the team and supporters; of much greater importance was securing promotion from division four.

When the goals for the year were established among the squad, Ray insisted promotion was uppermost in the player's thoughts with a trip to headquarters something they can now look forward to as promotion has been sealed.

“I suppose we didn’t really mention Croke Park [when setting goals for the year], it’s about promotion. It’s a bonus at the end when you do get promotion. When you are in a good position after three or four games you could start looking ahead and you could slip up the next day. It is important to take it game by game.

When the victory over London guaranteed a place in the final and a trip to Croke Park attention could, briefly, turn towards the final with Ray acknowledging he and his team-mates are aware of how significant it is for all Leitrim supporters.

“It’s hard not be conscious of it because whatever way you look at it, it is 13 years since we have been there. If that happened again some of the older lads will never get to play there again. This panel and the younger lads, I am sure they won’t think like that.

“A lot of them are under 25 and will be able to be there again, it could be just the start of it for some of them.”

From the opening day victory over Wexford, in which Leitrim went from trailing at half-time to running out 13 point winners, Leitrim's campaign has been one of the stories of the league. National coverage has been heaped upon the team like never before as the opening day win was followed by a series of cliffhangers.

Reflecting on that first win Ray said: “It was such a big scoreline that people might have got a bit carried away and every game has been tight since then. Maybe that was a bit flattering that day; it’s more realistic what is happening now.”

Subsequent wins against Wicklow, Antrim, Limerick and London saw the momentum and belief grow further with Ray acknowledging the support his side have received thus far has been greatly appreciated: “In Limerick there was 700 there, it was basically all Leitrim and you do notice stuff like that.

“They were all there waiting at the end, clapping you off the pitch and that does give you an extra boost. Even in Derry, for a game that mightn’t have mattered that much from a fans points of view they still made the journey which is something that was probably unheard of before.”

The impact of new manager Terry Hyland has been immediate and Ray was quick to praise the Cavan man's contribution.

Traditionally Ray would have operated as a key part of any forward line he would have been part of but this year has been deployed as a wing-back. He was honest enough to admit he would like to even more involved in the action but the style of play deployed by Hyland means he still plays a key role.

Talking about how Terry likes to play the game Ray said: “The defence is very attack minded, we are there to chip in, if the forwards aren’t doing it we can help out. We can score from everywhere on the pitch this year which is huge.

“Terry sets us up in such a way that when you don’t have the ball you have to work hard and put the pressure on to win it back. It lets you have freedom to do your own thing when you have the ball.

Reflecting on his own performances during the league campaign Ray was honest when he said: “I’d like to be involved a bit more than I am; I’m on the outskirts of things. I’m happy enough with certain aspects but there is always room for improvement.

“I’d like to maybe get involved with more scores but it is going ok at the moment.”

He also pointed out just how important the defence has been in terms of helping the side improve as an attacking unit when he said: “Paddy Maguire has got three or four points, Mark Plunkett can kick a point when he gets up there, Aidan Flynn has got a point or two and obviously Shane got the goal against London. Even Micheal McWeeney is very attack minded as well.”

Ray also revealed that when things haven't gone as planned the manager has been quick to let his players know.

“The first few games at half-time we weren’t doing great and we were let know about it at half-time and things changed then. He is not afraid to tell you when you need to be told.”

Having returned to the panel Ray has been particularly impressed with the impact of the team's younger players and feels the success they enjoyed at underage level has been of real benefit to the team as a whole.

Commenting on the contribution of the likes of Ryan O'Rourke, Mark and Gary Plunkett, Jack Heslin, Oisin Madden and Pearse Dolan, Ray said: “They know they are good but they are not cocky about it, they have an easy way to them. They are used to playing with each other and used to winning which is huge.

“They won the Connacht minor league together and they have kept the confidence growing. Maybe if they didn’t have that win they mightn’t have stayed together.”

The contribution of the teams veterans such as Emlyn Mulligan and Gary Reynolds may not have been as decisive on the pitch so far this year but nevertheless Ray was full of praise for the role they have played within the group.

Talking about the importance of their experience he said: “They are very good around the squad. Gary and Emlyn will say a few words after training and everyone listens to them when they speak.

“They make a lot of sense and they keep you grounded as well because you could easily get carried away with the run we are on but they have been around the block so they keep everyone’s feet on the ground.”

At the age of 30 Ray would almost fall into the senior citizen category within the group but he insisted he is happier letting his football do the talking commenting: “I keep myself to myself, I wouldn’t normally say too much. There are a lot of lads there that are leaders of that group and I am only coming in to it so I am happy enough to do the training and get on with it and let the lads do the talking.”

In recent weeks the Leitrim footballers have received national coverage like never before.

Marty Morrissey and the RTE cameras have paid a visit and all national newspapers have had their own take on 'Leitrim Rising' and Ray believes it is something he and his teammates must embrace as they continue to improve: “You don’t ignore it, you’re long enough out of the papers so you are as well to embrace it. We have a couple of lads that are good at that sort of thing and they are used to it and can handle it.

“It is nice to have a bit of attention around the team and so far we have been handling it well. The more successful you are the more attention you get so long may it continue.

The time for talking is almost over and Ray is certainly in the mood to keep the feelgood factor alive saying: “It’s all you're thinking about and then everyone you meet - there are people you have never spoken to before stopping you, talking about it. It gets hard at times because you are just repeating yourself but it is very exciting for everyone and you just have to embrace it.”