Ryan determined to inspire the next generation of Leitrim stars 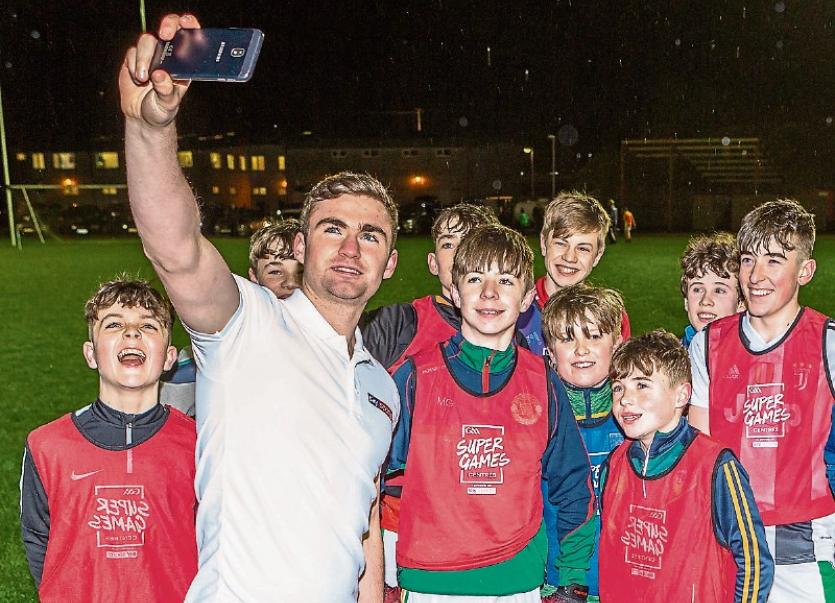 Star power - Ryan O'Rourke takes a selfie with a group of young Leitrim footballers at the launch of the GAA Super Games Centre in association with Sky Sports. Picture: Stefan Hoare

Seeing a Leitrim team run out onto the famed turf of Croke Park next Saturday might be the realisation of a lifelong dream for most footballers but Ryan O’Rourke realises it is the chance to inspire future generations of Leitrim footballers.

Leitrim’s top scorer in the league saw first hand what the county’s performances have meant in terms of public attention when he launched the GAA’s Super Games Centre in association with Sky Sports recently at the Leitrim GAA Centre of Excellence.

Recalling his own youth, Ryan knows the power of inspiration: “I was born in 1997, I would have been 10 or 11 around Dessie Dolan’s time. I still remember that team with James Glancy, Emlyn was starting off around then too and they had a couple of big days too.

“Even if they didn’t get across the line, they were still big days and everybody remembers them because they were such good performances and it lifted everybody at the time. That was who we looked up at that time and for this generation, it is great to have a team actually winning.

“They are seeing good performances but they are also seeing a team winning and that is a big change that we didn’t see ten years ago.”

When the subject of Croke Park invariably comes up, it is a different generation that first springs to Ryan’s mind as he highlights just what it will mean to a generation of footballers who have served the county so well over the past 15 years.

“It is brilliant for the likes of Emlyn, Gary Reynolds, Cathal McCrann and Paddy Maguire, lads who have been there for a few years now and it is great that they are getting their day in the sun.

“Hopefully, it is a good day that they’ll be able to look back on, that we put in a good performance and win the game; that would make it extra special.”

Asked if he ever thought that he would get to play in GAA headquarters, Ryan reveals a confidence that has driven this new look Leitrim team under Terry Hyland: “I thought it would come at some stage but it is great now, it is only my third year with the panel so it is coming early enough.

“To get to Croke Park, if it was championship, you are probably looking at All-Ireland Quarter-Finals so obviously then you’re looking at the Division 4 final. I definitely did think it was a possibility, I didn’t know when it was going to happen but I thought at some stage we’d be getting out of Division 4.”

Ryan started the League off with a bang, scoring 2-7 against Wexford and the crucial goal against Wicklow but he admits it has been tougher since as teams have doubled teamed him.

“It has been tough enough, you get more attention, more than you’d be used to and less possessions on the ball but it is just getting used to it.”

Typically, Ryan looks to the team as a whole “In fairness, the whole team I thought stood up and against Limerick we had 10 different scorers. We have enough players all over the field to do a job and get us over the line.”

Few games will live up to the excitement of his winner against Wicklow but again Ryan downplays it: “Most games there has been some dramatic finish but the Wicklow one was a good one.

“The ball just came across the square to me, I nearly missed it, I don’t know how it went in. A massive crowd came down from Leitrim so it was a brilliant one.”

His own generation have been lauded ever since they reached a Ted Webb Cup Final at U16 level. A Connacht Minor League title followed and for some a Connacht Colleges crown as well. There have been disappointments too at minor and U21 level but reaching the division 4 final is another sign of a talented group maturing.

“It is brilliant, they’ve seen a lot of heartache as well. The core of the group is now about 22-23 and in fairness to the managers we had, we were about 19 years of age when we first came in and we were probably a bit young and inexperienced.

“A lot of our group have a couple of years experience playing with the same team so that has made a big difference too. That is the big factor of why we are doing so well this year with Terry coming in.”

The Terry Hyland factor - explaining his impact seems like an impossible task but to Ryan, it is quite simple: “He is very positive, he was with Cavan for five years and he went up and down through the Divisions. He focuses a good bit on the mental side of things, that was a big thing we did this year.

“People talked about belief before and it is really only a word but Terry really tried to embed it in us and I suppose when you get results, everybody starts buying into it - if you don’t get results, people won’t buy in.

“We were getting results week in, week out and that belief just grows and grows every time and he has a brilliant buy-in from everybody, everybody is positive and looking forward to training. When you see the results there after everything he does, you can’t really complain too much.”

Leitrim's mental resolve has seen the Green & Gold come through games they would have lost in the past as Ryan acknowledges: “They were probably in a similar position with ten minutes to go against some of these teams but it was the other way around, we’d lost by a point.

“Now we’re winning by a point or we’re kicking on with ten to go. I think a lot of that is down to the mental side of it, we’ve done a lot of fitness work this year as well but it is an accumulation of all those things.”

Ryan wasn’t on the field when Leitrim lost to Derry in Celtic Park but the Fenagh youngster is more than aware of the threat the Oak Leaf county pose to Leitrim's ambitions: “Derry is a big county and they always have a good tradition and lots of good footballers.

“They just fell down the ranks but there is definitely lots of talent there. They were always kind of marked as the one team that was going back up and it was kind of a case of who was going up with them. We’ll see what they are like and hopefully in the final, we can do our best against them.”

With excitement levels going through the roof, keeping feet on the ground can be a challenge but not so according to Ryan: “For the first week or two, you are taken aback by the excitement but it has been going on so long now, since even the Wexford game and the Wicklow game, it is a month now so the feet are back on the ground and we’re starting to think about the final.

“I think everyone is dealing with it pretty well. We haven’t won anything as such so we’re not going to be getting carried away.”