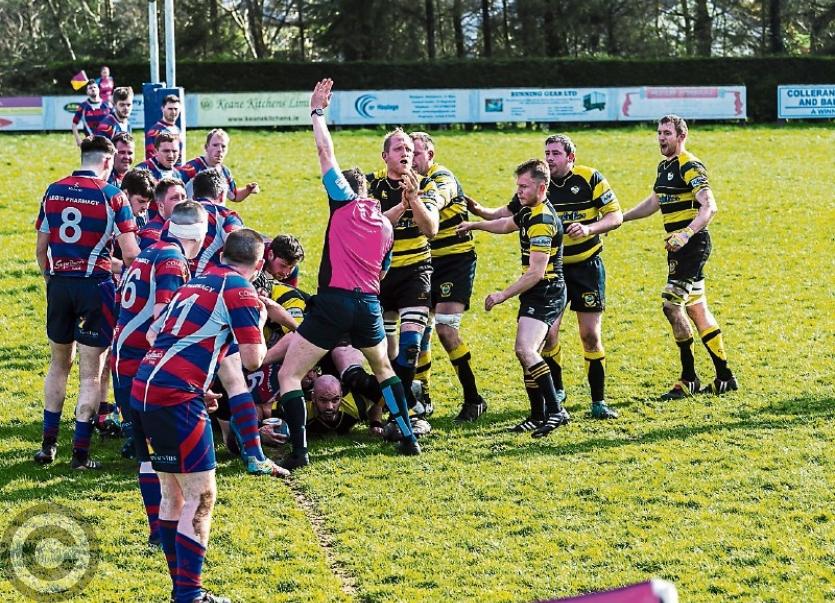 The referee signals a try for Carrick

Ballyhaunis might seem like an unlikely place for a slice of Leitrim sporting history but Carrick Rugby Club did just that last Sunday when they claimed the Connacht Junior 2 League title in a nail biting finish.

In what turned out to be an incredibly attritional game, Carrick physicality made the difference as they scored the only try of the game and that ultimately was the difference between the sides.

The platform for victory was laid down by the forward unit, spearheaded by the veteran Dermot Foley and captain Darrach Patterson. Carrick dominated the early exchanges but indiscipline allowed Tuam to open the scoring with a penalty in the seventh minute.

From the resulting kickoff, Carrick’s Paddy McKeon won a huge turnover and after carries by Sean Hynes and Gearoid Barry, Carrick won a penalty with which outhalf Keith O’Neill slotted between the posts.

Carrick continued to dominate the first half and the introduction of Denis McCaffrey added real impetus to the Carrick cause . A penalty on 25 minutes saw O’Neill opt to kick to the corner.

From the resulting lineout a massive maul by the Carrick eight resulted in hooker Keith Crossan touching down, O’Neill added the extras to leave Carrick leading 10-3. Unfortunately Carrick lost O’Neill to injury and had to reshape their back line with the introduction of Justin Farrell. As the first half came to a close Tuam closed the gap to four points with a penalty.

The second half started in a frantic fashion with both sides pushing to enforce their game plan on proceeding. Carrick began to move the ball wide through the highly influential Noel McDermott and John Healy, the centre partnership making major inroads into the Tuam defensive line.

Carrick started to empty their bench and introduced the Kelly brothers, Gavin and Declan, and veteran Colm McWeeney to the fray. Tuam narrowed the gap to the minimum on 54 minutes from a penalty in from the posts .

As the game came to close, the tension rose but Carrick’s physical dominance resulted in a yellow card for Tuam but unfortunately, Carrick were unable to turn their numerical advantage into points.

In the final play of the game, a series of penalties saw Tuam nearly breach the Carrick defensive line but a huge turnover by Shane Murtagh stopped the move, a pass to Dermot Foley which, fittingly allowed the man of the match kick the ball into touch to the delight of the Carrick team and supporters.

Carrick RFC’s management (Sean McKeon, Tom McGuinness and Shane McGuinness ) were delighted with the performance after the game, as “The Black and the Gold” reverberated around the ground.