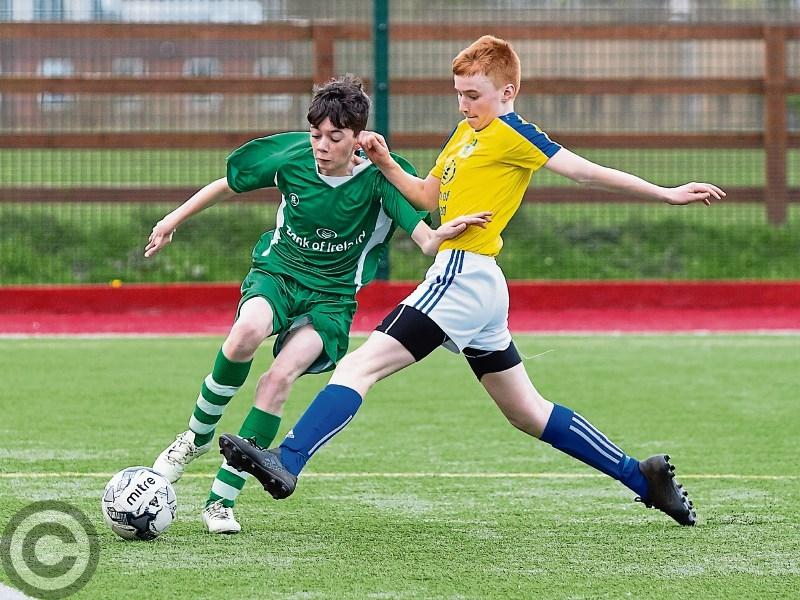 After the school’s girls were defeated in a national final last month, it was the turn of the boys last week but they too fell just short as Coola’s Conor McMorrow scored a stunning goal six minutes from time to deny the Manorhamilton school after they had staged a spirited comeback to overturn a two goal deficit.

In what proved to be an engrossing encounter, both teams looked at their most dangerous from set pieces during the opening exchanges.

Owen Elding, son of Anthony who memorably secured FAI Cup glory for Sligo Rovers with an injury-time strike against Drogheda United in 2013, saw his free kick from just outside the box fly over the bar in the fifth minute and shortly afterwards Gabriel Gilbride was very unlucky to see his excellent header fly wide of the Coola goal after an excellent delivery from Dylan McDermott.

Both sides proved to be very well organised in a hard fought and well matched contest. Elding twice came close to creating the opening goal with his dangerous free kicks. A 10th minute delivery saw Daniel King head just wide and moments afterwards it took an excellent save from St Clare’s goalkeeper Shaun Sheridan to deny him after his free beat the defensive wall.

The game was almost 15 minutes old before St Clare’s truly showed their teeth as an attacking force with Patrick Montgomery and Eanna Clancy combining to great effect at the edge of the box before Clancy unleashed a fine shot that required Coola goalkeeper Kyle Davey to be at his best.

The resulting corner saw Dylan McDermott’s set piece cause further problems for the Coola defence and Eanna Clancy could consider himself very unlucky to see his header go over the bar.

A 24th minute free saw St Clare’s go close once more. Tarach Ó Snodaigh rolled the ball into the path of Eanna Clancy who couldn’t have connected any sweeter with his shot but Kyle Davey was well positioned to make the save look easy.

Coola threatened immediately on the counter-attack; Sam Tuohy was released behind the defence with a booming kick from Davey but St Clare’s netminder Shaun Sheridan did well to save Tuohy’s effort.

The deadlock was broken with the game almost 27 minutes old. A teasing ball over the top from Owen Elding caused all manner of problems for the St Clare’s defence. The flight of the ball was completely misjudged allowing Sam Tuohy to finish low past St Clare’s goalkeeper Shaun Sheridan.

It was to get worse for St Clare’s as Tuohy struck for his and Coola’s second goal in the 34th minute, a minute before the half-time interval. An attempted backpass went horribly wrong from a St Clare’s point of view.

Shaun Sheridan attempted to intercept the danger but unable to use his hands he was beaten by the bounce of the ball and Tuohy was on hand to slot the ball into the unguarded net.

There was to be one further chance for St Clare’s before the interval and once again it was the set piece deliveries of Dylan McDermott that caused havoc in the Coola defence. Unfortunately for St Clare’s Eanna Clancy was just off target with his header from the injury time corner.

St Clare’s desperately needed a moment of inspiration and it arrived 10 minutes after the restart when Eanna Clancy scored directly from a wonderfully hit free kick, 20 yards from goal. Clancy won the free himself after a surging run was adjudged to have been brought to an end unfairly and he guided the resulting free kick around wall and into the corner of the goal, beyond the reach of Kyle Davey.

The celebrations had barely died down when St Clare's struck for an equaliser.

This time it was the turn of the Coola defenders to get themselves in a mess with a wayward backpass presenting the ball to Patrick Montgomery who duly slotted past Kyle Davey to level matters.

The momentum was now all with St Clare’s and they seemed to thrive in the knowledge that they were starting to dictate matters.

Eanna Clancy was incredibly unlucky not to give the Manorhamilton school the lead shortly afterwards. A sharp turn after receiving the ball from a throw-in was followed by a thunderbolt of a shot which was matched by an exceptional save from Kyle Davey who managed to deflect the ball over the crossbar.

The resulting corner caused further panic in the Coola defence before the ball was cleared off the line by Ciaran Kenny.

With 10 minutes of the contest remaining Eanna Clancy embarked on another powerful run before crossing dangerously for Gabriel Gilbride but his header was just off target.

Those missed chances were to come back to haunt St Clare’s as they were hit with a sucker punch with just six minutes remaining. Conor McMorrow advanced into the St Clare’s half of the pitch and as the defence retreated McMorrow kept going forward before unleashing a thunderbolt of a strike from all of 30 yards. St Clare’s goalkeeper Shaun Sheridan was powerless to prevent the ball from flying over his head and into the roof of the net for a goal that left everyone in attendance speechless.

St Clare’s refused to accept defeat and fought bravely for the remainder of the game in search of another equaliser.

Eanna Clancy saw a half volley from the edge of the box sail harmlessly over the bar while Clive Moffitt was unlucky twice in quick succession when he saw two efforts blocked after a good move started by Cathal Óg Kavanagh.

That proved to be the last chance of note as time ran out for St Clare’s after a cracking final. While there was disappointment for the St Clare’s contingent they could take some comfort from the fact that there was nothing but a stunning goal to separate the sides.

MAIN MAN - Owen Elding and two-goal hero Sam Tuohy were crucial for Coola while Conor McMorrow deserves a mention for the stunning goal that settled last Wednesday's final. For St Clare's Dylan McDermott's deliveries from set pieces were excellent and Tom Hughes did a fine job of marshalling the defence. Patrick Montgomery and Tarach Ó Snodaigh were both hugely influential but arguably the pick of the bunch was Eanna Clancy who was central to all of St Clare's good play and capped an excellent display with a stunning goal direct from a free kick.

TURNING POINT - Two goals in the space of a minute from Eanna Clancy and Patrick Montgomery seemed as though it may be the decisive moment in the game as St Clare's fought their way back into contention having trailed by two goals. Ultimately the true turning point arrived six minutes from the end when Conor McMorrow's stunning effort flew into the roof of the St Clare's net.

REF WATCH - There were puzzled expressions on the faces of those on the sideline with some of the yellow cards issued in the opening half which were seemingly as a result of bad language. To his credit John Mulroe was consistent in his decision making and helped ensure a fast-paced and entertaining contest and it was hard to dispute any of the key decisions he had to make.

HIGHLIGHT - Kyle Davey's stunning fingertip save to deny Eanna Clancy's shot from 25 yards, 19 minutes into the second half was bettered only by Conor McMorrow's  strike that secured victory for Coola.

LOWLIGHT - From a St Clare's point of view they will perhaps rue not performing to their full potential in the opening stages of the contest. However, that was made up for in the second half when they produced some excellent play to get themselves back in contention.