SOMETHING TO BUILD ON FOR THE FUTURE 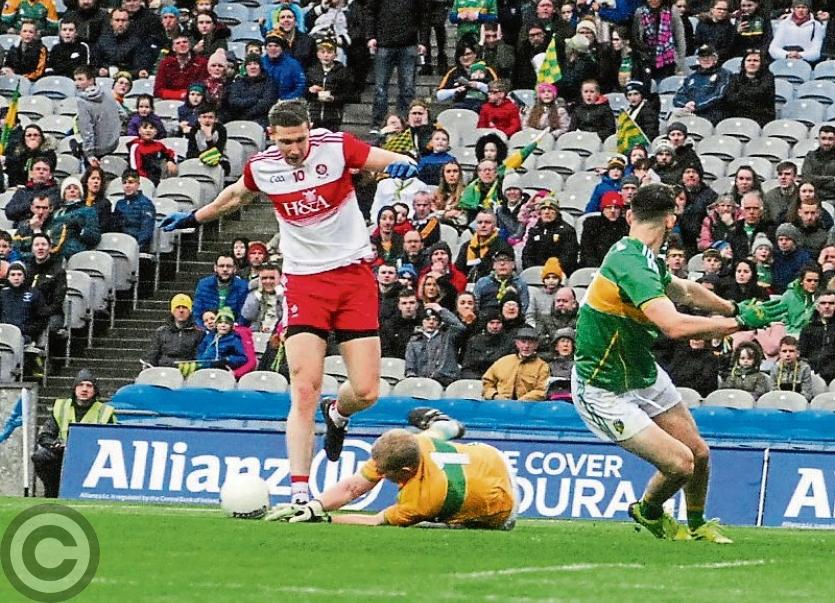 The competitor in Terry Hyland and his Leitrim team might bristle at the description but Saturday's Allianz NFL Division 4 Final loss might just be the harbinger of good times for Leitrim football.

There are defeats that lift the spirit and defeats that leave you flattened, bereft of hope and determined never to watch another Leitrim game. Unfortunately, we've had more than our fair share of those over the last six years but Croke Park last Saturday was definitely not one of those days.

This was a defeat with pride, a defeat where Leitrim battled and fought for every inch against a team, which we have to admit, was just that bit better and they didn't take a step back.

Some will reckon this is sentimental hogwash, a report overwhelmed by the romanticism of the occasion and the remarkable display of Leitrim pride but after the defeats the county have suffered at the hands of Mayo (2012), Armagh & London (2013) and any numbers of times to Roscommon in recent years, this was a defeat that you could build on for the years ahead.

Are there problem areas to be addressed? Of course there are and it won't be an overnight transformation, certainly not in time for this year's championship, but these things must start with a first step and the display in Croke Park was an excellent first step.

Leitrim will bemoan the nine first half wides but as Terry Hyland rightly pointed out during the league run, the only statistic that matters is the scoreboard and nobody worried about the missed chances other teams had against us then.

More urgent for Leitrim is the way Derry steamrolled through the centre of the defence before halftime to build up their match winning lead. Time and time again, Enda Lynn, Padraig Cassidy and Christy McKaigue charged through the middle and the simple outpass to Shane McGuigan invariably led to a score.

It needs a fix as no doubt Anthony Cunningham and Roscommon will have taken keen note. But there was still enough from Leitrim to suggest that real progress is being made and much brighter days lie ahead.

Leitrim got off to a blistering start with a Dean McGovern point just 45 seconds in. Ryan Bell responded for Derry but a kickout found Shane Moran and he surged forward to score from distance. Derry hit back with Enda Lynn drilling a shot over the bar before a patient move ended with Bell firing over.

Leitrim may have settled well but not everything was going well with wides from Domhnaill Flynn, Emlyn Mulligan and Ryan O’Rourke.

Evan Sweeney pointed from a good mark after a Mark Plunkett pass and he was central to the next score, O'Rourke tapping over a free for a foul on the Manor man.

A foul on the energetic Shane Moran saw Domhnaill Flynn convert and when a Derry attack broke down, a wonderful riposte resulted in O’Rourke scoring on 16 minutes from out on the Hogan Stand side.

That, unfortunately, was Leitrim’s high point as the wides mounted and Derry hit back with a Christopher Bradley free. Ray Mulvey's typical surging run ended with a successful shot from distance but crucially, Leitrim didn't score for the rest of the half as Derry finished the half like a proverbial train.

Lynn, Bell and Shane McGuigan all pointed before Emmet Bradley hit two in the space of a minute during added time to open up a 0-10 to 0-7 halftime lead for the Oak Leaf county.

Mulligan reduced the gap with a fine point from a tight angle barely half a minute into the second half but Leitrim needed a fantastic save from Cathal McCrann at the feet of Emmet Bradley to prevent a certain Derry goal.

Christopher Bradley and Christy McKaigue swapped scores with O’Rourke and Paddy Maguire in a blistering opening to the half. But Derry started to pull away; Padraig Cassidy's lung bursting run ended with a point before Shane McGuigan hit three on the trot to open up a six point lead on 13 minutes.

Mark Plunkett’s solo effort was Leitrim’s first score in 11 minutes but Derry hit back with a monster 50 yard effort from captain Christy McKaigue.

Leitrim kept pushing and points from Evan Sweeney and captain Micheal McWeeney raised Leitrim’s hopes but the Oak Leafers responded with a free from Christopher Bradley.

Ryan O’Rourke would hit two points either side of a McGuigan score as Leitrim went looking for a goal in added time. Evan Sweeney’s long range shot dropped short but Shane Quinn just couldn't make enough of a connection to force a goal.

Derry sub Niall Toner held off his man to score Derry’s final score and while Leitrim kept battling away, they never got the goal chance they need with only a point from Ryan O’Rourke leaving them four points adrift at the final whistle.

MAIN MAN - A few contenders - Leitrim's Evan Sweeney, Shane Moran and Ray Mulvey were exceptional, Moran's lung bursting runs in the first 20 minutes and Sweeney's elusive running standing out. Paddy Maguire and Micheal McWeeney seemed tireless and you could not fault the effort of any Leitrim player on show. Derry's Shane McGuigan got the man of the match award but to me, Padraig Cassidy was the man who literally carried Derry on his shoulders up and down the field. Enda Lynn, Brendan Rogers, Ryan Bell and Christopher Bradley all made big contributions.

TURNING POINT - Hard to pick just one as Derry turned the screw before halftime. But if you were to narrow it down, two Emmett Bradley  points in the space of 60 seconds in added time at the end of the first half were true killer blows.

TALKING POINT - Nine first half wides when playing with the strong wind was a handicap that Leitrim simply couldn't afford and it must have given Derry a huge boost to go in at the break with a three point advantage rather than trailing. The wides contributed to Leitrim's woes but you wonder did Leitrim run themselves ragged in the first 20 minutes as they drove at the Derry defence with countless lung bursting runs? Derry seemed to measure their physical efforts in the first half and it was noticeable that gaps started to open alarmingly in the ten minutes before halftime, coinciding with Derry's run of six unanswered points? Something to think about!

REF WATCH - Did you hear anyone talk about the referee last Saturday? Or any of his decisions? A very good outing for Kildare official Brendan Cawley, unfussy, let the game flow but kept control at all times. Helped by both teams really wanting to play football.

HIGHLIGHT - The eruption of noise that greeted a brilliant point from Ryan O'Rourke, following a swift counter-attacking move after Derry turned over the ball in attack, put Leitrim six points to three ahead after 16 minutes. It really had the Leitrim crowd in dreamland.

LOWLIGHT - On a day when Leitrim gave their all and went down fighting, it seems churlish to talk about low points but nine first half wides and the way Leitrim faded from the game in two key periods won't have pleased Terry Hyland when he looks back on this contest.

WHAT'S NEXT - Both these teams face huge local derbies in their next big games. Leitrim face Roscommon in Dr Hyde Park on Sunday May 11, in the Connacht Senior Championship while Derry take on neighbours and All-Ireland finalists Tyrone on the same date in a preliminary round Ulster Championship clash. We will see then the difference between Division 1 and 4!