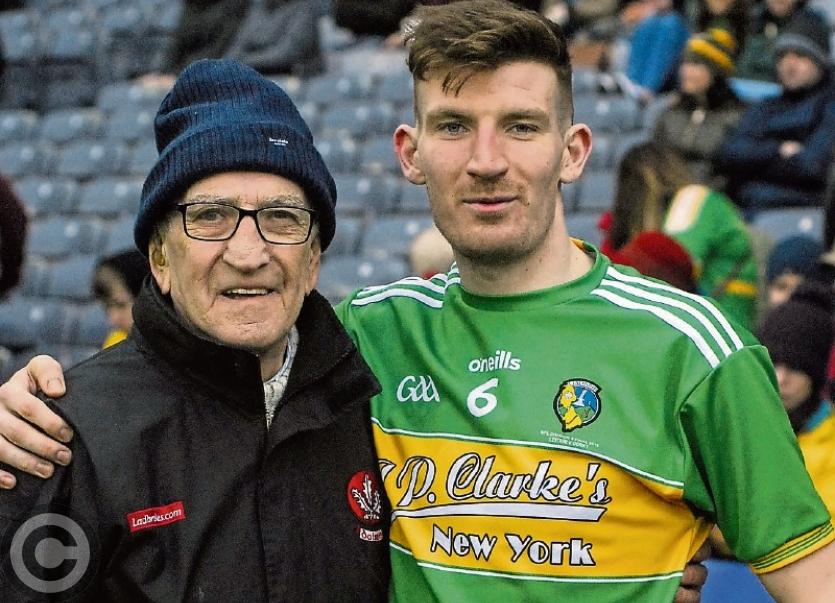 Still proud of you! P.J. Mullen from Coleraine might have been cheering on his native Derry but he was also backing his grandson Shane Quinn on the Leitrim team Picture: Willie Donnellan

Playing in a national final in Croke Park is special but for Shane Quinn, last Saturday was made extra special by the presence of his grandfather P.J. Mullen, a diehard Derry fan!

Shane’s mother Claire hails from Coleraine and while his grandfather missed the game in Celtic Park through illness, he was there in Croke Park to witness his grandson attempting to ruin Derry’s perfect season.

It made a great occasion that bit more special for Shane too: “It was great there, I stayed out on the pitch there for a good while after, waiting for the grandfather to come down. I was chatting to him and I think the last time he saw me play was a Minor League final in 2011.

“He said 'you played great, you played great' and two minutes later, he says 'my eyesight isn’t great and I couldn’t see much of the game' so I didn’t know what was going on,” joked Shane.

Support was evident all around the ground and Shane was amazed by the sheer numbers of Leitrim fans who took over Croke Park: “Credit goes to the supporters. I saw things on facebook and twitter about the 16th man and they really were the 16th man today but at the end of the day, it is a results business and we wanted to lift that Cup, especially for the great support that we had.

“It was amazing to hear the Leitrim chant. I know it is a bit of a cliche to say we have the best fans in the world but on days like that, the final whistle went, we were beat by four points and the crowd start singing ‘Leitrim, Leitrim’, that’s huge.

“That lifts our spirits after being beaten - they were the 16th and 17th Leitrim man there. It is a pity we couldn’t do it for them, they were so good for us.”

Shane almost gave them something extra to cheer about late in the game when he almost connected with a long ball into the Derry goalmouth: “I drifted in, I was getting tired and I was hoping it would drop. We did a bit of video work and we knew that they couldn’t deal with a high ball. I took a chance and I think I missed it myself more than anyone made a great save.