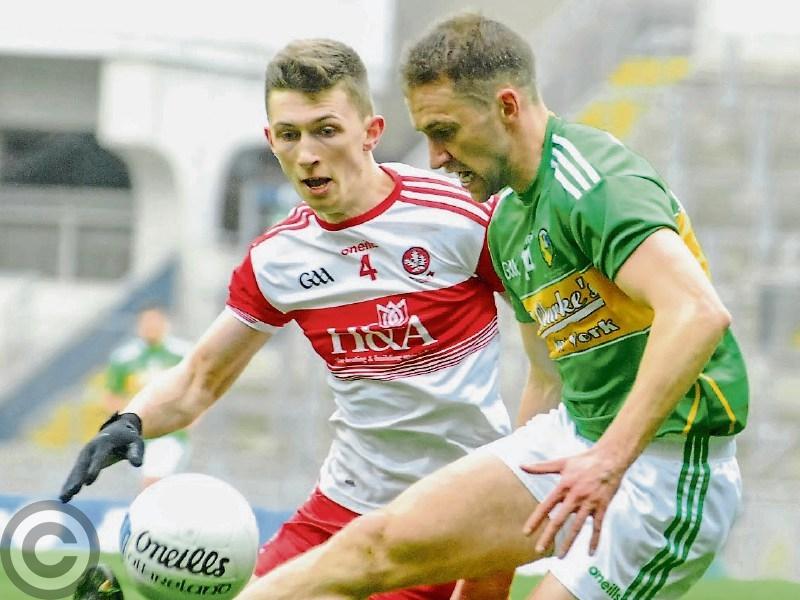 If there was one major talking point from neutrals in Croke Park for Saturday’s division 4 Final, it was the overwhelming number of Leitrim fans in GAA headquarters. And it was very noticeable on the field according to Evan Sweeney.

The Glencar/Manor man was taken aback by the level of support: “You have to admire the Leitrim fans, the whole county was behind us and it did make a difference. You are only human at the end of the day and you have to blank a lot of that stuff out but at the same time, when you hear the roar of the Leitrim fans when you put up a score, it is brilliant to be involved in this, fair play to them.”

Disappointed with the result, Evan insists Leitrim will learn from it: “The initial feeling is disappointment but probably when we reflect on it over the next week or two, our main aim was promotion at the start of the year and we did that.

“It is important next year that we build on this in the League and try to up the standards in the county and push on. We kept pushing but Derry have played in big games like that before but for us, it was a new experience.

“We are making progress which is probably the most important thing. It is just about progress and not just settling on what we’ve had.”

Evan also paid tribute to Terry Hyland for having the team so well prepared: “This is probably my first real experience. Terry and the boys have done it before so I just trusted them and they put everything in place for us.

“The talent is there, we probably need to back ourselves going forward next year and push standards higher. Coming up to Croke Park is a big day but we really attacked it early on. We really went for it, we weren’t standing off which is encouraging, we were going for broke.

“Derry have that quality too and they started picking off scores a bit easier than us. I thought we never laid down, we never died and right up until the end, the game was still there for us.”

Roscommon are up next and Evan is looking forward to it: “Roscommon were a division 1 team and we’re coming up from division 4 to division 3 but you have to play the best teams to push on. The talent is there and we’ve shown that we can play football, we just need to tidy up a few things.”