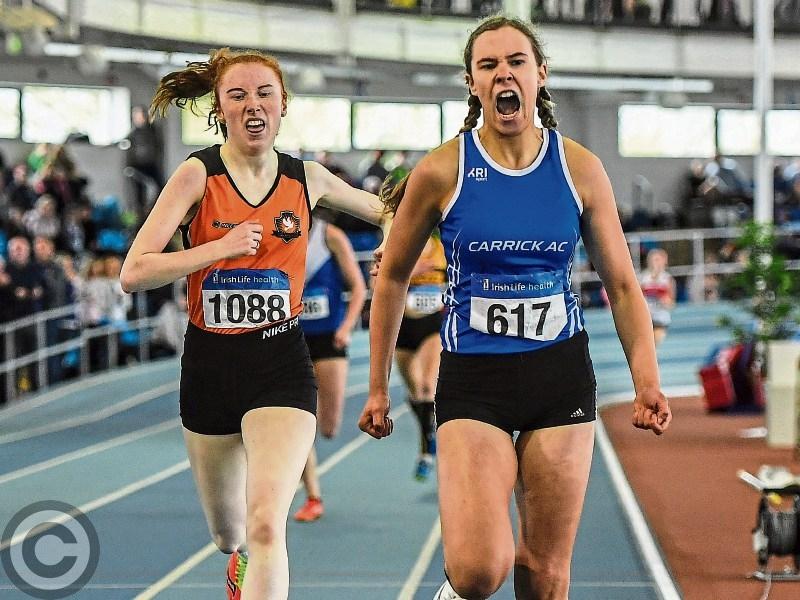 Carrick AC's Ellis Conway lets out a scream of delight as she wins the Girls U19 800m title at the Irish Life Health National Juvenile Indoors. Picture: Sam Barnes/Sportsfile

Ellis Conway and Niamh Carolan led the way for Leitrim athletes at the Irish Life Health National Juvenile Indoor Championships in Athlone, both winning gold medals over the weekend.

With the county's focus very much on Croke Park, the county's young athletes showed they are a match for the nation's best by bringing home two gold, one silver, two bronze medals and four fourth place finishes the highlights.

Ellis Conway’s first ever national 800m final turned into a dream debut as she ran the perfect tactical race to take gold in a time of 2.19.97. Ellis moved into the lead with 200m, launching a ferocious final sprint to hold off Lauren Murphy for the gold medal.

Niamh Carolan’s gold medal in the U16 Walk was no less dramatic as the North Leitrim walker took the gold medal by just six hundredths of a second. Niamh, who finished 12th in the Shot and seventh in her 800m heat, won the title in a time of 7.28.22 ahead of Waterford’s Maeve O’Connor in 7.28.28, a remarkably close race.

Carrick AC’s Alannah McGuinness claimed her first ever indoor medal with a superb silver in the U18 60m Final. After running 7.80 in the heat, Alannah dipped on the line to pip Longford’s Yemi Talabi for the silver, both athletes clocking 7.67 seconds behind European 200m champion Rhasidat Adekele.

Incredibly, it was even closer in the U15 Girls walk where North Leitrim AC’s Sara O’Beirne held off the challenge of Sophie Monahan of St Senan’s AC to take the bronze medal. Sara’s time of 5.20.43 saw her pip Monahan by three hundredths of a second to claim the medal.

Darragh Mitchell completed the walking medal haul when he finished third in the U17 walk behind Matthew Glennon of Mullingar Harriers. Darragh demonstrated unusual range of ability as he finished seventh in the 60m Hurdles Final in a time of 10.51.

That race saw Diarmuid Giblin claim one of Leitrim’s fourth place finishes as his time of 9.15 saw him finish in fourth. His North Leitrim clubmate Aaron Bradshaw also finished fourth in the U19 60m Hurdles in a time of 11.12 seconds.

Leitrim's final fourth place finish was registered by Ballinamore AC's Matthew Lee in the U14 walk, Matthew finished six seconds off the medal with a strong time of 6.24.99 and an impressive first appearance at the national finals.

His young clubmate Luke Charles emulated his older brother Patrick and Oliver by reaching the U12 60m Final where he finished seventh in a time of 8.69 seconds, a time he also ran in the heats. North Leitrim’s Mark Hazlett was 12th overall with a time of 8.77 seconds.

The walks also saw North Leitrim’s Rachel Keaney finished fifth in the U15 Girls while Edward Mitchell and Finn Verachtert finished seventh and eighth in the U15 Boys event.

Sarah Brady had two strong runs over the weekend, finishing 9th in the U17 Girls 1,500m with Carrick AC’s Lauren Reynolds 11th, before Sarah then finished seventh in the 800m to complete a tough weekend.

Dean Williams finished eight in the U14 Shot while both Helen Verachtert (U16) and Alan O’Beirne (U13) were 13th in their shot events.

Carrick AC’s Paul Lenehan set a big new pb in the U18 Long Jump when he cleared 4.99m to finish ninth overall.

Next Sunday sees the finish of the indoors with the relay finals in Athlone.

l Colin Griffin finished eleventh in a new personal best of 32.05 in the Dunboyne 10K last Sunday. Colin will compete in the Rotterdam marathon on Sunday next.