Lee does the double 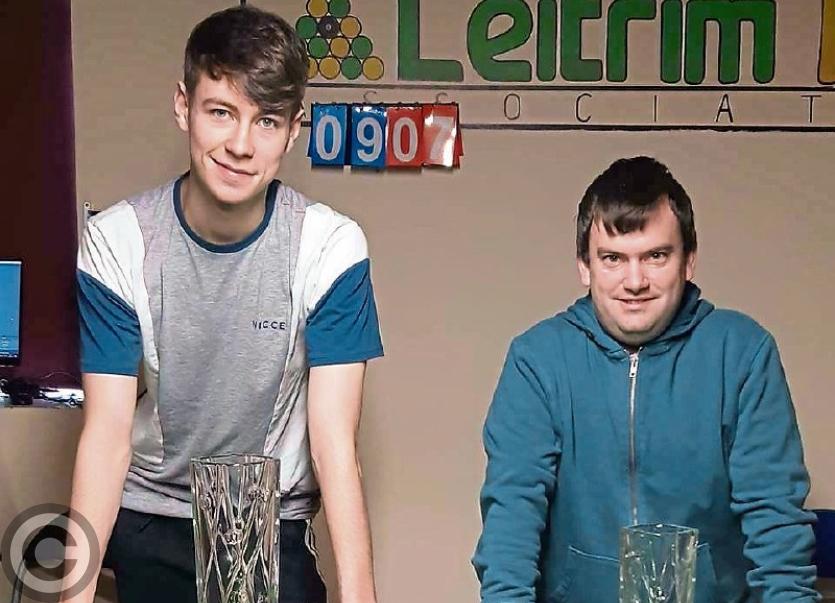 Well done to Lee McSharry who has been crowned Leitrim Champion 2019 and the Leitrim Pool Premier League Champion 2019 over the last two weekends.

Well done to all players and thank you to all our competitors! Lee McSharry beat Brendan Shivnan 10-8 in his semi final while Kevin beat Niall Sweeney 10-0 in the other Semi Final.

In the B section Keith Conlon defeated Dave McWeeney 10-5 to win the B section Final while Daragh McQuaid was victorious in the C final where he defeated Newtowngore's Shane Prior in a tight battle 10-9.

Well done to all our champions and all our competitors for their participation in this event, it has been a great success with games taking place each week. The total prize money given out across all competitions was a massive €1000.

On the weekend of March 22-24, Leitrim Pool hosted their first ever Leitrim Pool Championship weekend in the Lough Allen Hotel & Spa, Drumshanbo.

We had a variety of competitions including the inaugural Leitrim Champion, Over 50, U23 right down to U 12s as well as a doubles competition and a four man team event.

In the U12 event, Eoin Philips played Colm Dwyer, both players are playing at an exceptional level for their age, Eoin winning a tight final.

In the U15 event, Adam Casey took on Benjamin Dietz in the final with Adam winning out 4-1.

In the U18 event, Northern Ireland U18 international and European champion Shane Prior faced David Coulter, Shane beating David 4-0.

In the Under 23 event, a field of nine players came down to Jamie Sharkey and Lee McSharry. It started tight but Jamie kicked on and reeled off the next 4 frames to take the title.

In the Over 50’s event, eight competitors took part and it came down to Drumshanbo’s Jeremiah Coulter against Drumsna's Brendan Murray, Brendan shot into a 3-1 lead but Jeremiah clawed his way back to 4-3 before Brendan finally got himself to the magic five frames.

In the Doubles event there was a variety of styles and standards all mixed together which meant for a very exciting event. Gavin Donnelly & Dermot Washington emerged from one side of the draw with Kevin McWeeney & Tommy Washington from the other. In the final Gavin and Dermot were too strong and ran out 4-0 victors.

In the four man Team event, 11 teams took part in the double elimination event which meant that each team was guaranteed two games.

In the final game of the session, Paddy Brady vs Jeremiah Coulter went to a decider, Paddy played a canon to open the black and got so unlucky in potting the black off it.

In the Quarter finals on Sunday morning, we had a selection of tight matches. Brendan Murray continued his good form and went 4-2 up against Jamie Gaffney but Jamie knuckled down and brought it to 4-4 where Gaffney won the decider.

Lee McSharry was against Brendan Shivnan, Benny started the better to go 4-3 up but Lee tied the scores and then cleared from break to win 5-4.

In the Semi Finals, Taylor's team mates Niall Sweeney and Dave McWeeney faced each other. It was tight the whole way with never more than a frame between the teams. Sweeney went 2-1 up, 3-2 up and 4-3 up but McWeeney dished for 4-4 and won the next to go on the hill 5-4 up.

Sweeney dished the 10th frame to bring the match to a decider. In the decider Sweeney took out the finish to win 6-5.

In the other semi, final Lee McSharry faced Jamie Gaffney. Gaffney had a black for 2-2 but potted the white and from there, Lee reeled off the next three frames to win 6-1.

The final, which took place last Sunday in the Pool hall in Drumshanbo, was always going to be tight. McSharry and Sweeney were both careful in the opening to the match with Lee taking a few nice finishes as well as Niall.

At 4-4 it was all to play for but Lee took out two good finishes to go 6-4 up, one frame away from the title. Niall responded with a clearance to close the gap to one but Lee cleared from break to win the title 7-5.

Well Done to Lee and Niall on reaching the final from a big field of 44. Well done to Lee on achieving the double, a great achievement.

Don't forget, to subscribe to both of our Youtube channels to get notifications of when we are live: Leitrim Pool Live.