A MAKE OR BREAK YEAR FOR ALL 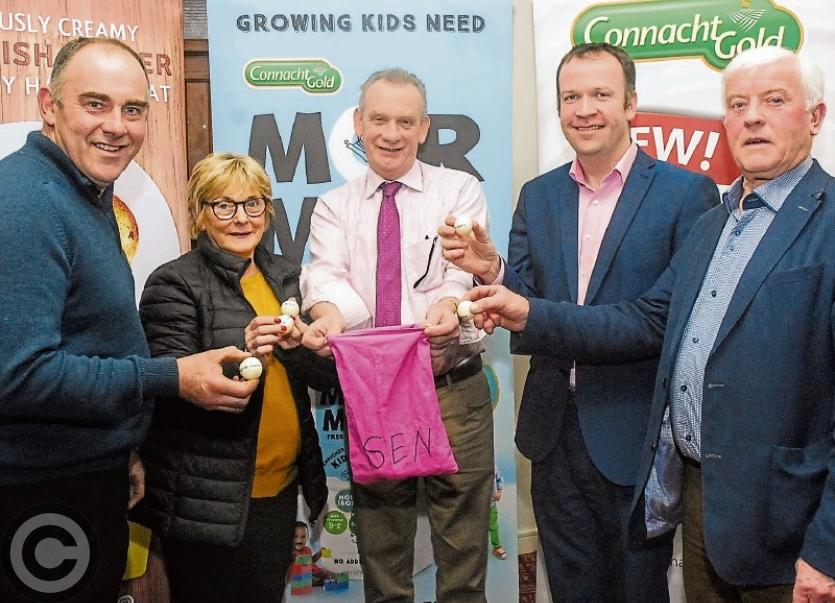 Pat Duffy, John Connor and Frank Butler of Aurivo pictured with County Board chairman Terence Boyle and secretary Attracta O'Reilly at the draw for the 2019 Connacht Gold Leitrim Senior Championship.

Leitrim clubs face into one of their most important seasons ever as draws for the 2019 Connacht Gold Senior and Smith Monumentals Intermediate Football championships were made last Monday evening in The Bush Hotel.

With three teams being relegated from Senior and four from intermediate, there will be almost as much focus on who survives as who lifts the Fenagh Cup at the end of the season.

It was a point hammered home by County Board chairman Terence Boyle who said: “This is a very significant year for clubs in both league and championship, all games will be absolutely vital.”

With seedings introduced for this year only for the group stages, there is no outright group of death in either championship although group one in both the Senior and Intermediate grade were reckoned by observers to be the harder of the two groups.

Defending champions Aughawillan will face derby games with neighbours Ballinamore Sean O'Heslin's and Aughnasheelin in group 2 while in group 1, former champions Mohill, Glencar/Manorhamilton and Melvin Gaels will be joined by up and coming Fenagh St Caillin's in a tough group.

In the Intermediate, early favourites Annaduff and Leitrim Gaels have both been drawn in the same group with Drumkeerin, Cloone and Carrigallen while last year's Junior winners Glenfarne/ Kiltyclogher are in group 2.

l For more on the club championship draws, see page 70 of this week's Leitrim Observer.