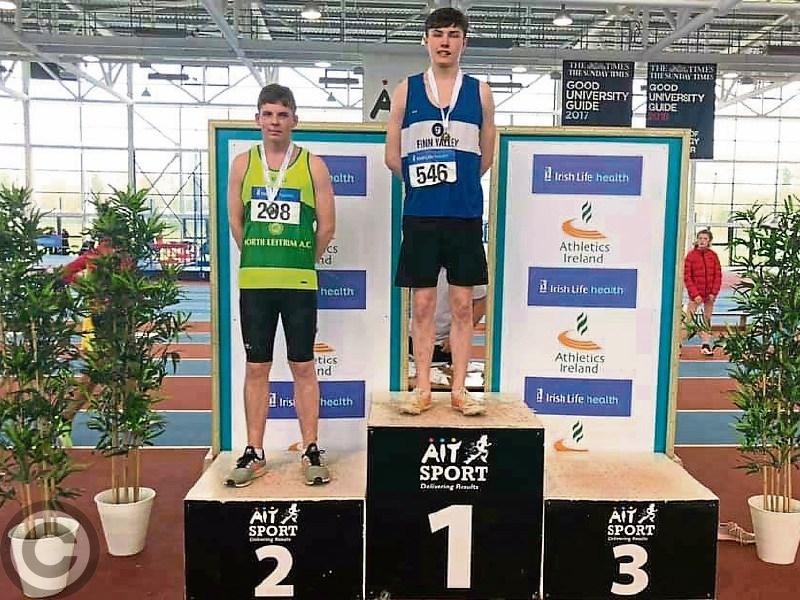 Aaron jumped 11.95m to take second behind Finn Valley's Christopher Kerins who jumped 12.11m to take the gold medal and a first ever national medal for the north Leitrim athlete.

Aaron went on to finish fifth in the shot with clubmate Oisin Carolan sixth, Aaron throwing 7.95m and Oisin 6.66m.

North Leitrim had two other throwers in action with Lara Mulvaney Kelly finishing ninth with a best throw of 9.62m while clubmate Cormac Fahey finished seventh in the U17 shot with a throw of 10.45m as all his throws exceeded the 10m mark.

Carrick AC's U12 boys team of Luke Charles, Riaghan Guckian, Alexander Oates and Nathan Casey turned in a superb display to finish seventh overall in the 4 x 200m. Finishing third in their heat, the youngsters ran 2.01.89, eight seconds faster that they had run in Connacht.

Carrick AC's Jack Keenehan finished ninth in the U17 Long Jump with a best of 4.78m.

Also in Athlone last Saturday, Callum Whelan of Carrick AC threw 45.29 to finish 9th for AIT in the Javelin at the Irish Universities championships with clubmate Cathal McElgunn of UCD ran 53.64 to finish fifth in his 400m heat.