Double still on for Carrick after they see off Loughrea 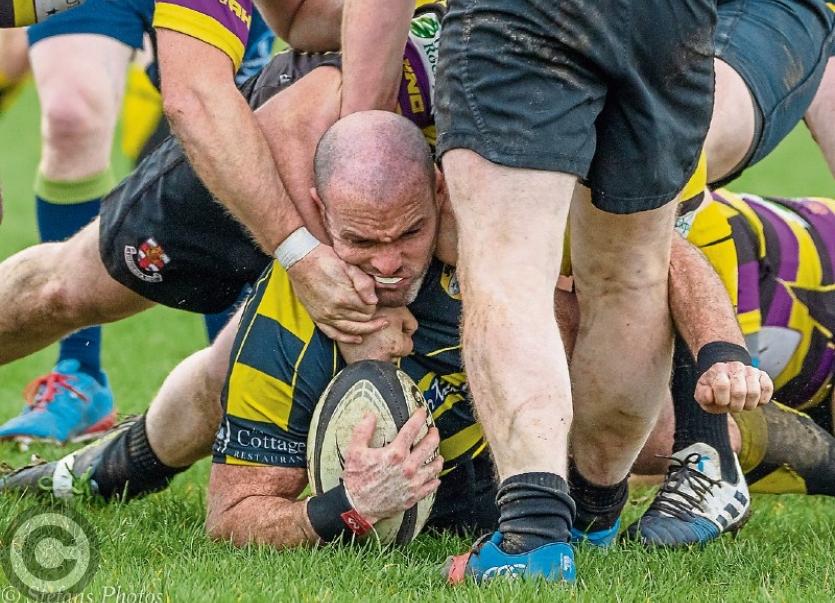 A bit of a squeeze - a Carrick player tries to ground the ball during the clash against Loughrea Picture: Stefan Hoare

In what turned out to be an incredibly attritional game, Carrick's physicality and superior fittest saw them coming out on the winning end by a two tries to one try margin.

The platform for victory was laid down by the forward unit, with huge carries by Dermot Foley, Darrach Patterson and Gavin Kelly in particular denting holes in the Loughrea defensive line.

Carrick dominated the opening exchanges and an infringement by the Loughrea backrow, allowed fullback Michael Domican push Carrick into a three point lead on 10 minutes.

Loughrea to their credit began exerting pressure on the Carrick defensive line and after a number of power plays, they crashed over in the corner, Loughrea failed to add the extra points from the conversion, leaving the score at 5-3 in favour of the travelling team.

As the half came to a close Carrick began to enforce their game plan on proceedings and after a number of big carries by Denis McCafferky playing at his favoured position at wing forward inside, saw Loughrea infringe at the breakdown leading to a further three points from the boot of Domican. The first half ended with Carrick leading by a single point.

Early into the second half Carrick lost the highly influential Dermot Foley to injury. Foley was replaced by Peter Lavin who would go on to have a major input into the outcome of the game.

On 48 minutes after a series of big carries, Carrick earned a scrum inside the Loughrea 22. Carrick's superior scrum enabled captain Darrach Patterson to pick from the base and evade a number of would be tackles to score Carrick’s first try of the game.

Carrick failed to add the extras leaving the score at 11 to 5 in favour of Carrick heading into the final quarter. Carrick’s second try was the result of excellent interplay between backs and forwards, with stand in outside half John Healy dictating the play for the Carrick 15.

After a huge carry by Noel McDermott, Carrick’s forward unit took matters into their own hands, which resulted in Peter Lavin crashing over. Unfortunately the extras were missed leaving the score at 16-5 heading into the final ten minutes .

As the game came to a conclusion the visitors applied some pressure to the Carrick line and eventually they went over in the corner. The conversion was missed leaving the score at 16-10 and leaving the Carrick faithful unnecessarily nervous approaching the closing stages.

The last play of the game saw the highly industrious Robbie Davis pass to his half-back partner John Healy who dispatched the ball to the sidelines to the delight of the large local contingent.

Carrick RFC’s management (Sean McKeon, Tom McGuinness and Shane McGuinness ) were delighted with the performance after the game, which sees Carrick renew their recent rivalry with Tuam RFC.

The final takes place next weekend with venue and times confirmed during the week.