So much at stake for clubs in season of immense change 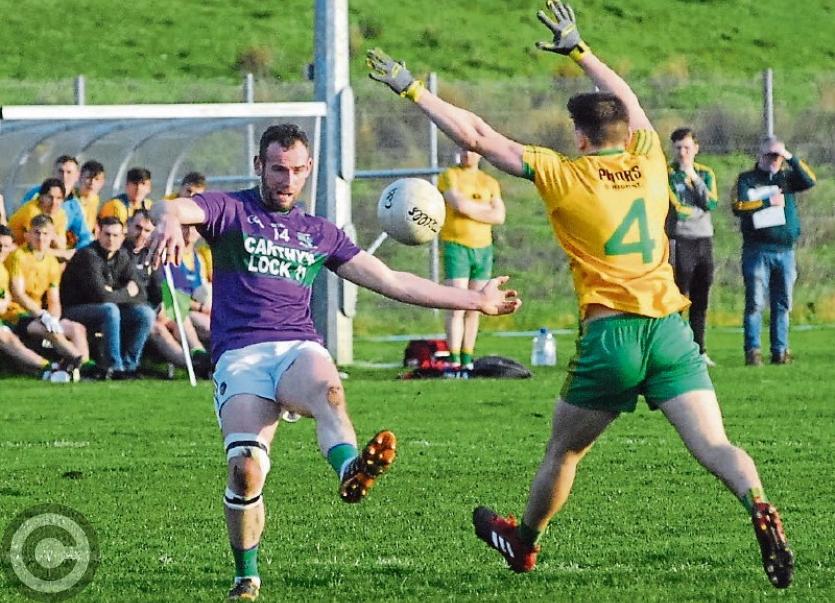 Liam Moreton sends a shot towards the Ballinamore goal despite an attempted block from a Ballinamore Sean O'Heslin's defender Picture: Willie Donnellan

The start of one of the most important seasons ever in Leitrim club last Saturday turned up some intriguing results as clubs are literally playing for their futures, in League and championship, during 2019.

What makes this year so interesting is that this is the final year of the 12 team divisions, the final year when second string teams will play league football against first teams in the lower grades and a year in which four teams will make the drop to Division 2 football for 2020.

A new eight team format with two separate rounds and trophies, one without county players, will replace the current structure in an effort to provide meaningful games at a time of the year when the inter-county scene is in full flow but players are ready and willing to play football.

It means that nobody can afford a slow start to the year like Aughawillan had last year and every win is a major step forward for the victors.

So in that regard, Fenagh St Caillin's, Aughawillan, Mohill, newly promoted Annaduff, Melvin Gaels and Ballinamore Sean O'Heslin's will be happiest after the opening round of games.

For Melvin Gaels, their win over neighbours Glencar/Manorhamilton gained added importance after Monday's Senior championship draw as the Kinlough men definitely have the early bragging rights.

Annaduff, who suffered two tough losses in league and championship finals last year, set the most eye catching result with a 5-16 to 1-17 win over Aughnasheelin, the goals coming from Adam O'Hagan, Gavin O'Brien, Michael Cox, Sean McNabola and Kenny Cox.

Fenagh St Caillin's 3-14 to 1-10 win over Gortletteragh was just as impressive, last year's Intermediate winners determined to make a big impact in 2019 but big wins appeared to be theme of the weekend.

County champions Aughawillan had 14 points to spare over newly promoted Allen Gaels, a team they will meet in the senior championship, while Mohill's six point win over St Mary's and Sean O'Heslin's similar win over Leitrim Gaels look positively small in comparison to the other winners, former Leitrim star Keith Beirne hitting six points for the Mohill men.

Another notable feature from the weekend was the high scores served up with eight points the lowest tally recorded by any team, Leitrim and Allen Gaels.

St Mary's scored 15 points in a losing effort, Aughnasheelin went even better with 1-17 while Manor registered 1-13 and Gortletteragh 0-13 in quite an astonishing display of scoring for the first round of the league.

Top scorers were Annaduff with 31 points but both Fenagh (3-14), Aughawillan (3-13), Mohill and Melvin Gaels (2-15 each) all went above the 20 point mark, the average winning tally coming out an incredible 22 points while the average losing tally is 13.3 points per game.

Whether last weekend's scorelines indicate a new all out attacking game taking over the county, it promises plenty of intrigue and shocks in this most important league campaign ever.