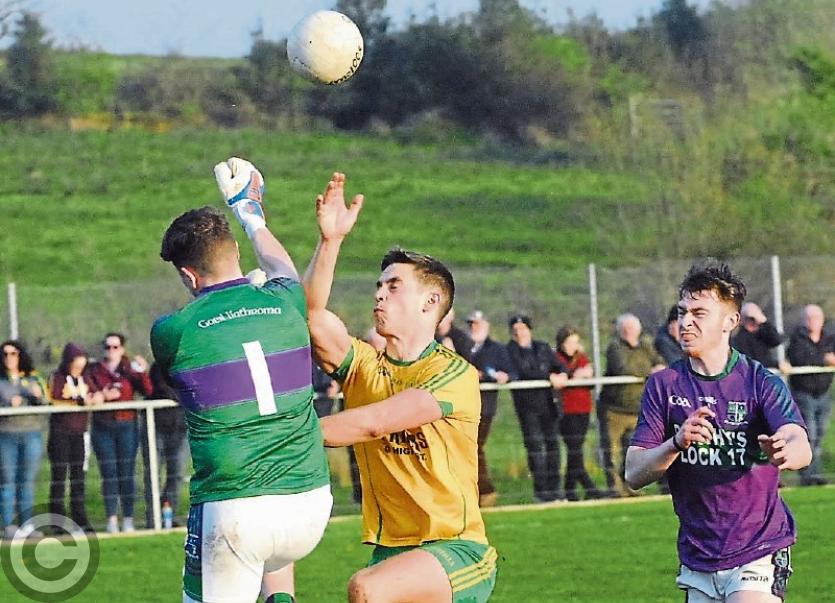 Leitrim Gaels keeper Brendan Flynn gets his hand to the ball ahead of Ballinamore's Shane Moran Picture: Willie Donnellan

If the fight to remain in Division 1 will be tough this year, the battle to survive in Division 2 is even more cut-throat with not even the prospect of promotion on offer.

With the top eight teams from Division 1 at the end of this year's campaign tagged for Division 1 next year, four teams from the top flight will move into the new division 2. And that means that only four of the current 12 teams in the grade will make it into Division 2 in 2020.

Of course, both Mohill and Glencar/Manorhamilton second strings are ruled out straight away but it means that six teams from Division 2 will join Glenfarne/ Kiltyclogher in Division 3 next year.

And it is clear that a lot of teams have taken clear heed of the situation with a lot of one sided games in the first round last weekend.

Some teams may see the merit in dropping down to the Junior grade, based on numbers available to them, but there is a very real chance for teams to play for their futures here.

Bornacoola made the drop to the Intermediate championship for this year but they looked as if they might drop to Division 3 football next year after a 1-15 to 1-5 loss to Dromahair. But if there is a team of renowned battlers, it is the Bors so you can't write them off.

Aughavas, promoted last year along with Eslin, suffered a derby defeat at the hands of Carrigallen 1-16 to 0-8, while Eslin were in contention for much of their contest against Cloone but badly ran out of steam as Cloone scored an important 2-12 to 0-6 victory.

Drumreilly showed their senior championship clash with a good 0-12 to 1-4 victory over Kiltubrid while Ballinaglera lived up to their status with a nine point win over Mohill's second string, winning out 1-16 to 0-10.

Next weekend's games see an eagerly anticipated derby between Dromahair and Drumkeerin, two unbeaten teams, while Ballinaglera and Cloone will also put their unbeaten records on the line against each other.

Bornacoola or Aughawillan will pick up a first win, the same applying to Glencar/ Manorhamilton and Kiltubrid while Carrigallen and Drumreilly will look to continue winning ways against Eslin and Mohill respectively.

It makes for an incredibly interesting year ahead.