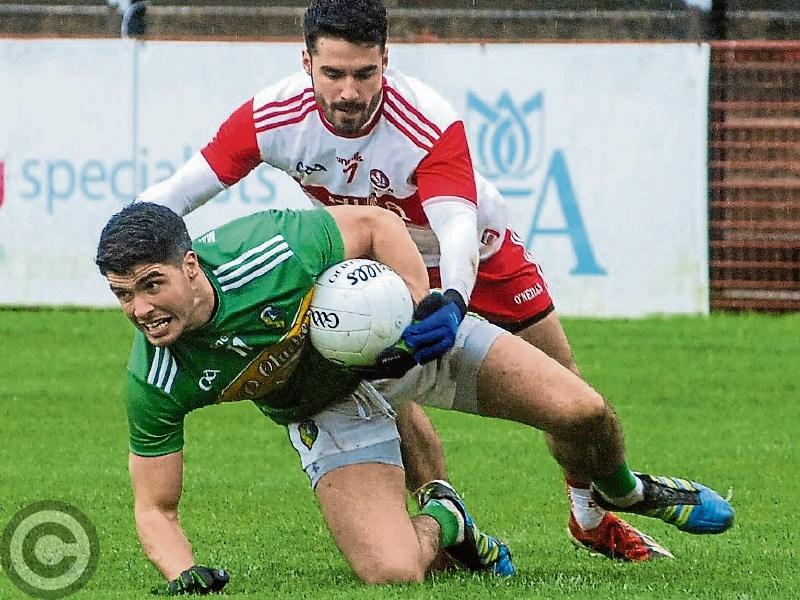 Emlyn Mulligan, pictured in action against Derry, was sent off for Melvin Gaels against Glencar/Manorhamilton

Fourteen man Melvin Gaels registered what was a convincing win over Glencar/Manor in Bundoran on Saturday after decisively outplaying their rivals for the opening three quarters of this lively clash.

A second yellow card that Emlyn Mulligan received resulted in Melvin Gaels completing the action in the contest one man down for the last fourteen minutes. Prior to Mulligan’s dismissal, Melvin Gaels enjoyed an eleven points lead but that was cut that back to five points at the end by Glencar/Manor.

The final quarter was marred somewhat when a number of what could be described as “handbag” incidents occurred between groups of players from each side that led to an unedifying spectacle for the good sized attendance present.

Glencar/Manor drew first blood when Declan Byrne tapped over a fourth minute free. The sides were on level within a minute after Darragh Rooney fired over for Melvin Gaels.

Over the next three minutes Melvin Gaels took control of the proceedings with points from Emlyn Mulligan (free), Liam Ryan and Caolan Clancy.

Conor Dolan replied on ten minutes but Caolan Clancy, Cillian McGloin, Mulligan and Conor Sheridan, who was making his return to the Gaels colours, all chipped in with a point each.

When a ball came back off the Manor upright in the 20th minute Reese Brennan was quickest to react when he grabbed it and fired over a point.

Caolan Clancy converted a long range free and a well orchestrated 24th minute move split the Manor defence wide open and ended with Emlyn Mulligan giving a final pass to Darragh Rooney for Rooney to plant the ball firmly in the visitors net.

Melvin Gaels now enjoyed a nine point lead but the Glencar/Manor men did finish the half with a little bit of a flourish which reduced their interval deficit, points from Conor Dolan (2) and James Glancy, Glancy's point from a fifty after Melvin Gaels' Gareth Phelan denied James Rooney a goal

Melvin Gaels enjoyed a 1-10 to 0-7 advantage at the break and Glencar/Manor closed the gap slightly when Conor Dolan converted a free but the Gaels lifted their game again and put issue beyond any doubt in the third quarter.

Caolan Clancy tapped over a free before Emlyn Mulligan raced through a Manor defence that was caught out at sixes and sevens and fired to their net before Darragh Rooney and Reese Brennan whipped over a point apiece.

Declan Byrne pulled back a point for Glencar/Manor when he put over a 41st minute free.

A Mulligan 46th minute free put Melvin Gaels into an 11 point lead with 14 minutes left but they were reduced to 14 players two minutes later when Mulligan received a second yellow card following an incident involving his marker Brian McDonald, who was also yellow carded.

Conor Dolan reduced the deficit with two frees before a James Glancy shot from about 35 metres out ended in the net after the ball slipped out of the grasp of goalkeeper Gareth Phelan, who was slightly off his line.

Cillian McGloin fired over a 57th minute point in what proved to be his side’s last score of the evening. The Gaels had a let off in the next minute when Conal McGowan was forced to clear off his goal line.

In the closing scoring action Declan Byrne added two points; one from play and the other from a free. After that Melvin Gaels held out for a five point winning margin.

TURNING POINT -When Darragh Rooney hammered home a 24th minute goal it demonstrated how much Melvin Gaels were in command in the contest.

TALKING POINT - Melvin Gaels, under new manager James Phelan, were very much up for the game and went about doing everything in well-organised manner while playing an attractive brand of football. Glencar/ Manor played second fiddle for most of this game and will certainly have to improve their performances if they are retain their league title.

REF WATCH - Eamon O’Grady was an impartial official throughout and applied the rules fairly in a common sense manner. Like all referees he does not have eyes in the back of his head and when late melees developed he probably didn’t see everything.

HIGHLIGHT - With some 31 scores registered, including three goals, over the hour made it quite an absorbing contest to watch. The game also produced a score of high drama late on when James Glancy's high, dropping ball from well outfield slipped through the fingers of goalkeeper, Gareth Phelan and just across his goal line into the net.

LOWLIGHT - Melvin Gaels and Glencar/Manor ties have some history of being tense affairs but this game boiled over a bit too much in the final 15 minutes when, at times, playing the man became more the focus for some players rather than playing the ball.

WHAT NOW? Melvin Gaels travel to Gortletteragh on Saturday with high expectations especially after Gortletteragh’s defeat by Fenagh. Glencar/Manor will hope to pick up their first league points when they entertain Annaduff in Boggaun.