All too easy for St Mary's 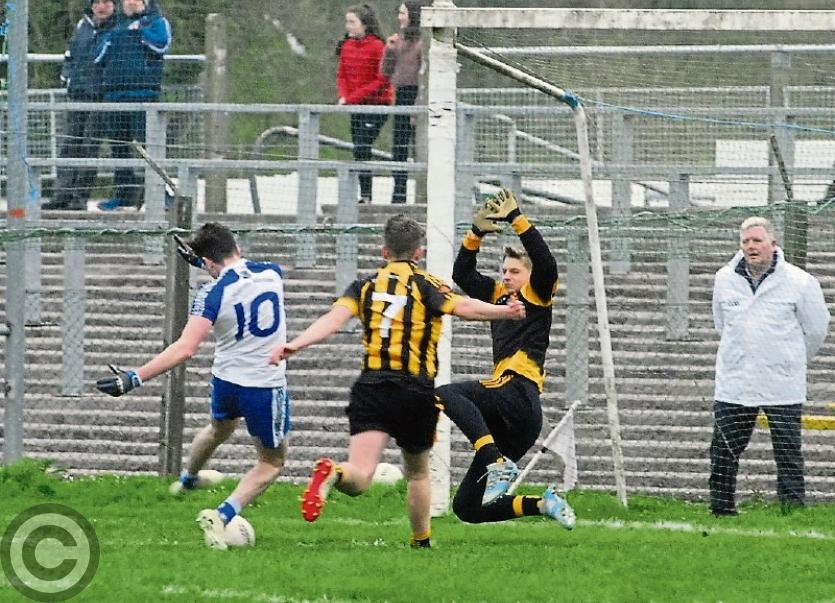 Andrew McKenna strikes for the game's only goal late in the first half Monday Picture: Willie Donnellan

St Mary's retained their Newtowngore Engineering U17 Division 1 league title with a victory over Mac Diarmada Gaels that was every bit as convincing as the scoreline suggests.

Many in their own camp will say that this current St Mary's team is not as good as last year's star studded squad that won the league and championship double but they won last Monday night every bit as convincingly as their predecessors did.

And they showed they had steel too when they lost highly influential midfielder Gavin Reynolds with a shoulder injury at halftime. But they made light of the huge loss in the second half, upping their performance levels and holding Mac Diarmada Gaels to just one point in the second half.

Mac Diarmada Gaels never got out of the blocks in the second half and only sporadically showed what they are capable of in the first, briefly threatening when they tied the scores at 0-3 apiece midway through the first 30 minutes.

It could have been better for Mac Diarmada Gaels as McWeeney broke free of the suffocating attentions of Cian Singleton on seven minutes but found Killian Gaffey a barrier impossible to breach, the keeper really catching the eye with good work.

But the second quarter belonged to a wasteful St Mary's who, despite a host of missed goal and point chances, increased their lead with points from Conor Hackett, Gavin Reynolds and McKenna with only a McWeeney free in response.

Having butchered a couple of goal chances before this, Carrick hit the vital score on the stroke of halftime, a visionary ball over the top from Sam Barnes finding Andrew McKenna in space and his close range finish was bundled to the net, leaving St Mary's 1-6 to 0-4 in front.

The loss of Reynolds seemed to suggest problems for Mary's but points from Mark Lowe (a goal was on) and two from Conor Hackett killed off this game inside the first four minutes of the second half, particularly when McWeeney was denied a goal by a good save from Gaffey at the other end.

Another McKenna free was followed by the Gaels only score of the half from Barry McWeeney with eight minutes left. The final score fell to an impressive Ashley Mayiza as Carrick ran out comfortable winners.

MAIN MAN - A lot of contenders for St Mary's - Andrew McKenna, Conor Hackett and Ethan Bohan were lively in attack, Gavin Reynolds & Brian King dominated midfield while Niall Crowe, Ruairi King & Ashley Mayiza dominated defence in front of an excellent Killian Gaffey. But it was the cool Sam Barnes who ran the show for St Mary’s. For Mac Diarmada Gaels, there were sparks from Barry McWeeney, James Honeyman and Paul Moran

TALKING POINT - St Mary's, who have now won back to back U17 league titles, looked in trouble when Gavin Reynolds was forced out of the game at halftime. But the manner in which they upped  their game and dominated the second half was hugely impressive

REF WATCH - A good solid outing for Eamonn O'Grady, sensibly reffed and made the big decisions when needed

HIGHLIGHT - St Mary's teamwork and workrate really stood out as even with the game won, they never allowed Mac Diarmada Gaels an inch of headway