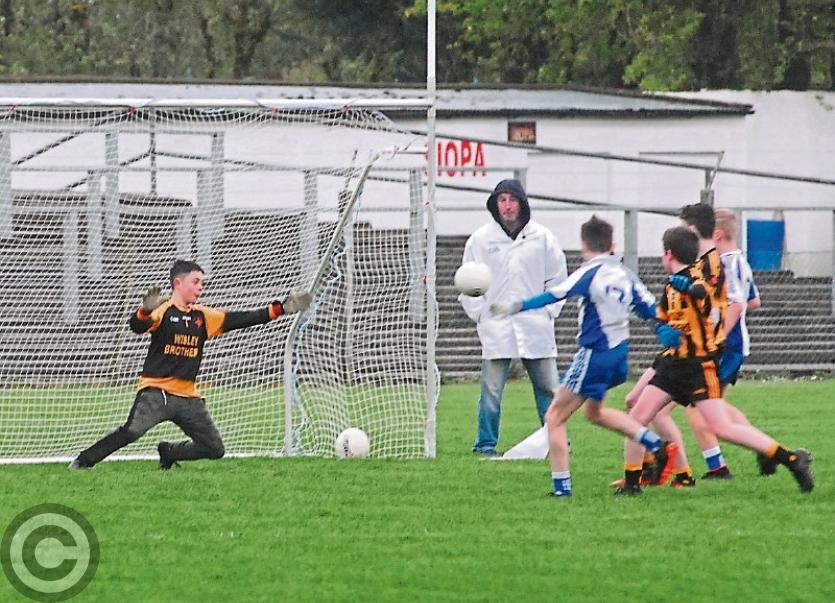 The feeling that St Mary's Kiltoghert are the coming force in Leitrim football was reinforced on Monday as their U13 team plundered the Barna Recycling Division 1 title at their ease in Avantcard Pairc Sean Mac Diarmada.

Up against a battling Mac Diarmada Gaels outfit, the Carrick men mightn't have looked as strong on paper as the team who completed a league and championship double last year but if anything, this team was even more dominant as they battered their opponents.

After getting a hefty scare from a strong Fenagh St Caillin's in the semi-final, St Mary's were obviously determined there would be no scares and once the impressive Brian Keaney found the net on two minutes, they were on their way.

Already this year, St Mary's have claimed the U17 and U13 Division 1 league crowns to go with doubles in both age groups last year but what makes this victory even more impressive is that there may be players as good, if not better, on their second team!

St Mary's decided to keep their first team confined to players in their final year so a few players who started last year did not get to play with this team, something that shows the rewards of the work being done at underage level in the club for the last seven or eight years.

If St Mary's reap just 40% of the players who shone for their U17 and U13 teams this year and last, they will be the team to beat at adult level in the years to come. It is a frightening prospect that St Mary's, like the Dubs, finally seem to be harnessing their population with quality coaching at underage level.

For Mac Diarmada Gaels, disappointment to lose a second final in a week to St Mary's but the amalgamation of Sean O'Heslin's and Kiltubrid must be considered a success, giving their players a chance of competing at the very highest level. And when the amalgamation beds in fully in the years to come, the rewards will be even greater.

Paul Honeyman opened the scoring with a free barely half a minute in but Brian Keaney soon had St Mary's on top as he hit a free and then goaled after a great pass over the top from Charlie Boyle as points from Josh Maye and Cian Reynolds followed.

Maye tapped the ball to the net after Brian Keaney's shot was saved on the line but St Mary's needed Gareth Barry to make a goalline clearance after Paul Honeyman's shot spilled loose with the keeper beaten while Hugh Bracken did well to make a good stop from a deflected shot just a minute later.

St Mary's showed their killer instinct as they not only survived but extended the lead. Another Keaney run left Cian Reynolds with an unopposed punched ball to the net and Carrick were 11 points clear after just nine minutes.

Honeyman and Keaney swapped frees but the Gaels got a much needed boost when Darragh Lee's long range shot bounced in front of the goal and evaded the keeper to end up in the net.

Instead of worrying St Mary's, it focussed their minds and they finished the half with a goal each from Maye and Reynolds, both set up by Keaney runs and shots, to leave St Mary's with a 5-4 to 1-2 halftime lead.

Mac Diarmada Gaels reduced that lead when Alex Cannon made a good catch before turning to goal in the first minute of the second half and he quickly added a point. St Mary's were not for wavering and a Keaney free was followed by another Maye goal after a long range shot was spilled and Maye finished well.

Keaney then hit 1-1 in the space of a minute, Paul Keaney pointing on 11 minutes. St Mary's sub Dylan Coles showed great finishing instinct with a goal with almost his first touch.

Honeyman and Maye swapped frees as the game ended with Keaney and Coles firing over points to complete a comprehensive victory.

MAIN MAN - Alan Beirne, the outstanding Gardiner brothers, Ambrose Devine, Diarmuid O'Connell, Josh Maye and Cian Reynolds all stood out for the winners but at the heart of their deadly attack was Brian Keaney, most of the scores coming either from him or set up by him. For Mac Diarmada Gaels, Cathal McCarthy, Paul Honeyman, Alex Cannon, Darragh Lee and Michael Keegan did best.

TURNING POINT - You might not think  there was one given the scoreline but there was! Seven minutes in, Mac Diarmada Gaels looked as if they had a goal when Paul Honeyman's shot was cleared off the line. A minute later, Hugh Bracken made a good save from a deflected shot - a Gaels goal at this point would have got them back in the game but St Mary's held out and went straight down the field for Cian Reynolds to punch the ball to the net after a Keaney run and with that, game over!

TALKING POINT - St Mary's may have the advantage of numbers but the work done on their kick passing has separated them from opposition in two finals at U17 & U13 level in the space of a week now. Perhaps a lesson for other clubs to follow?

WHAT NOW? A break now for Primary Schools and U15 competition over the next few months but few will bet against St Mary's doing the double again.