Bizarre end to a bizarre final 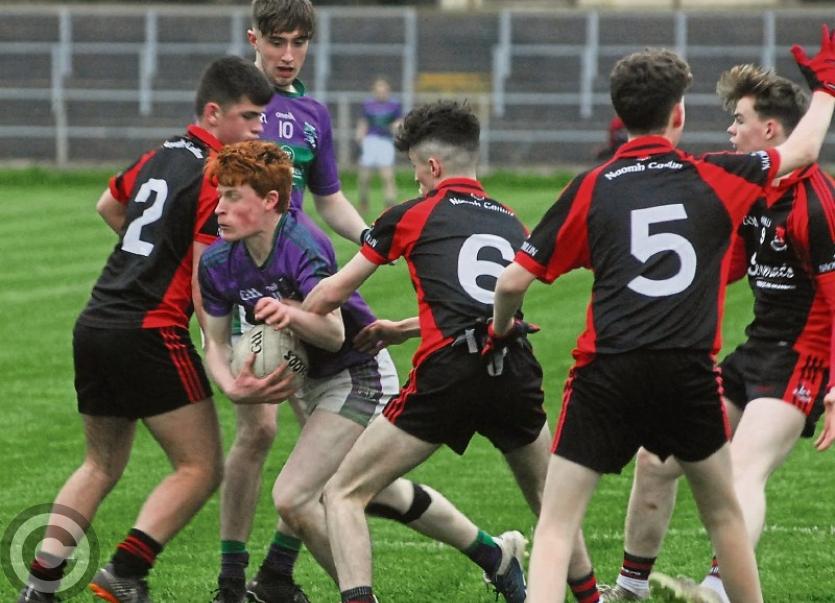 Bizarre is the only way to describe this Newtowngore Engineering U17 League Division 2 Final that goes to a replay after a dramatic and topsy-turvy final that almost defies description.

Extra-time should have been played but with both teams walking off the field, perhaps unaware there was extra-time stated in the fixtures and in rule, the decision was then taken to not play the extra periods due to fading light.

Should the game have reached extra-time is another thing as controversy surrounded Fenagh's last two scores - Fergal McLoughlin made a great catch and was clearly fouled by the Leitrim Gaels defence with six minutes to go.

However, the highly impressive full-forward never actually stopped running, took three to five steps around a few defenders and blasted a close range free to the net. Incredibly the goal was awarded by referee James McCaffrey as Fenagh went a point in front.

Leitrim Gaels levelled through Paddy Keane before Fenagh again took the lead in controversial circumstances, McLoughlin blocking a Gaels goal kick from about seven yards away and then pointing when he clearly inside the exclusion zone!

In fairness, Fenagh could legitimately claim that they didn't get the frees they should have against a tough tackling Leitrim Gaels defence as a lot of fouls went unpunished but they really should have killed off the game when they had the chance.

Leitrim Gaels started off with an Oisin Curley point but Fenagh hit back with four unanswered points from Fergal McLoughlin (2), Eoin McLoughlin and Caolann McDermott as St Caillin's were dominating the Leitrim Gaels kickout.

The Gaels got a lifeline, with a large slice of good fortune, when a Jim Cullen shot dropped short and into the net on 11 minutes but Fenagh responded in spectacular fashion with eight points to Leitrim's one before halftime.

McLoughlin added a brace, Eoin McLoughlin set up Colm McGovern for a point before Shane Rynn put over a free with nine minutes left in the half.

But Fenagh were on a roll and Fergal McLoughlin, Luke Reynolds, Colm McGovern, Shane Smith and another McLoughlin free left the score at a staggering 0-12 to 1-2 at the interval.

Less than a minute into the second half, Leitrim Gaels gave themselves a lifeline when Oisin Curley's long range shot-pass bounced in front of keeper Ryan Smith and with a forward reaching for the ball, it bounced into the net for a goal.

Leitrim Gaels keeper Brian Cull made a good save to deny Fergal McLoughlin an instant response but Leitrim Gaels belted home a third goal when a Fenagh defender lost the ball.

Incredibly, Leitrim Gaels grabbed a fourth goal and third in eight minutes when a quick free found Shane Rynn and he blasted to the net. Both sides missed good goal chances but two points from Cormac Scollan and Call um Canning steadied Fenagh midway through the half to tie the scores.

Oisin Curley and Daniel O'Sullivan seemed to have put the Gaels back in control with less than six minutes to go but then came McLoughlin's controversial goal. Paddy Keane responded with a point to tie the scores but Fenagh looked to have won it with McLoughlin's block on a kickout and point.

The Gaels almost won it in added time when Oisin Curley got on the end of a move but his powerful shot was deflected over the bar when it seemed headed to the net, the game ending in a draw that was probably the fairest result.

MAIN MAN - Lots of good performances from both teams here but there was no doubting that Fergal McLoughlin was the outstanding player on the field, scoring 1-7 and causing all sorts of problems for the Leitrim Gaels defence.

TURNING POINT - Two slightly fortunate goals, one in each half, kept Leitrim Gaels in contention when Fenagh looked as if they were romping away with the game. But the big turning point was Fergal McLoughlin's goal, somewhat controversial as it was, as it got Fenagh back into the game.

TALKING POINT - The failure to play extra-time was truly bizarre. It was clearly communicated in the fixtures list that extra-time was to be played and while there was a legitimate issue over the fading light, it appears that both teams walked off the field and despite officials informing both camps that there was extra-time, neither team came back out. Either a case of both teams ignoring instructions or a failure of Coiste na nOg to inform teams of regulations - it certainly didn't look good.

WHAT NOW? The sides meet again but who knows when with the U15 League already up and running from this Thursday. Who holds the edge for the replay is hard to know - Fenagh were the better team for long, long periods but Leitrim Gaels were able to make big plays when needed. Too close to call.