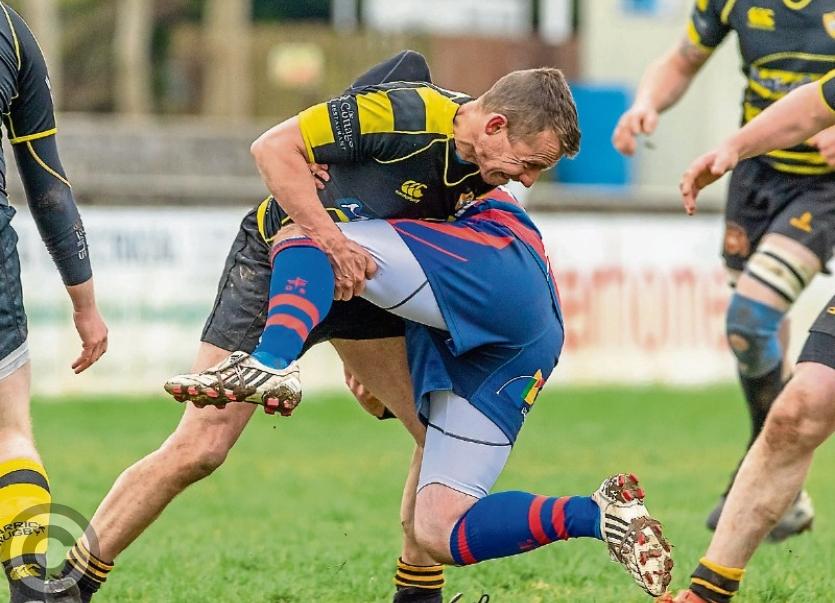 Carrick-on-Shannon’s bid to complete a league and cup double ended when a second half blitz saw Tuam seconds claim the Ard na Cregg Cup with an 8-5 win in Corthinians last Sunday.

A try from Ross Monaghan, as well as a penalty from David Lally was enough for the Galway men to seal the win, who trailed 5-0 at half time to a Peter Lavin try.

With the wind buffeting around Corinthians RFC, kicking from hand was rendered a lottery and both teams wisely adopted the same game plan; keeping it tight in the packs before using their back lines.

The story of the half can be told through two twenty minute periods of pressure from each team. Tuam were in the ascendancy early, in terms of possession and territory. They couldn’t, however, make their dominance count on the scoreboard, despite the best efforts of the hugely effective ball carrying tight head prop, Barry Ruane.

The Galway men thought they had taken the lead when lock Kenneth Joyce crashed over from an inventive, quickly taken lineout. The touch judge, however, deemed the throw was crooked and a large contingent of Tuam supporters were left frustrated as the score was chalked off.

Carrick were more clinical when their chance arose. Peter Lavin, whose introduction off the bench for Noel McDermott gave the Leitrim men fresh impetus and it was through him that Carrick opened the days scoring, not far from the half time whistle.

From the second phase off a scrum in the Tuam 22, Carrick scrum half Robbie Davis picked Lavin out and powered over from close range. The conversion, from a tough angle, was short but given the weather and the general parity of the teams, any score was gladly welcomed.

The interval looked to have energised Tuam and they looked sharper in the second half, an energy best exemplified by their try from Ross Monaghan approximately ten minutes into the half.

The centre ran in a try from 35 metres, touching down in the right hand corner after showing no less than three Carrick outside backs a clean set of heels. With lots of effort and physicality throughout the game, Monaghan’s vision, jinking and pace was the moment of the game.

It would have been an injustice of massive proportions if such a try did not belong to the victorious team. The conversion was narrowly wide from David Lally, but there was a palpable sense of confidence rising among the Tuam players afterwards.

Buoyed by their try, Tuam began turning the screw and upped the tempo and it was only through brave Carrick tackling, led by Steven Guckian, that they didn’t immediately add more tries.

The pressure Tuam were exerting was becoming difficult for Carrick to deal with within the strictures of the law. Another Tuam attack yielded a penalty when a Carrick player was penalised for not rolling away.

Given the wind, the kick, despite being in the 22, was in no way a gimme. David Lally perfectly accounted for the wind and hit his left footed penalty low, hard and over the bar for an 8-5 lead.

The momentum was now clearly Tuam’s and their cause was helped by the quality they could bring off the bench. John Coen, who was stationed on the left wing, was particularly impressive upon his introduction.

With the lead hard earned, Tuam’s route to victory would now depend upon their game management. This is where their half backs, Brian Dempsey and David Lally, came up trumps in the second half.

Slowing the tempo down and directing their pack around the pitch, Tuam, on the rare occasions they kicked, kept Carrick pinned in their own half with purposeful and accurate kicking from hand.

It is to Carrick’s credit that they never wilted and kept plugging away to the final whistle, but it was Tuam’s day and the full time whistle was greeted by jubilant scenes by Tuam supporters and players.