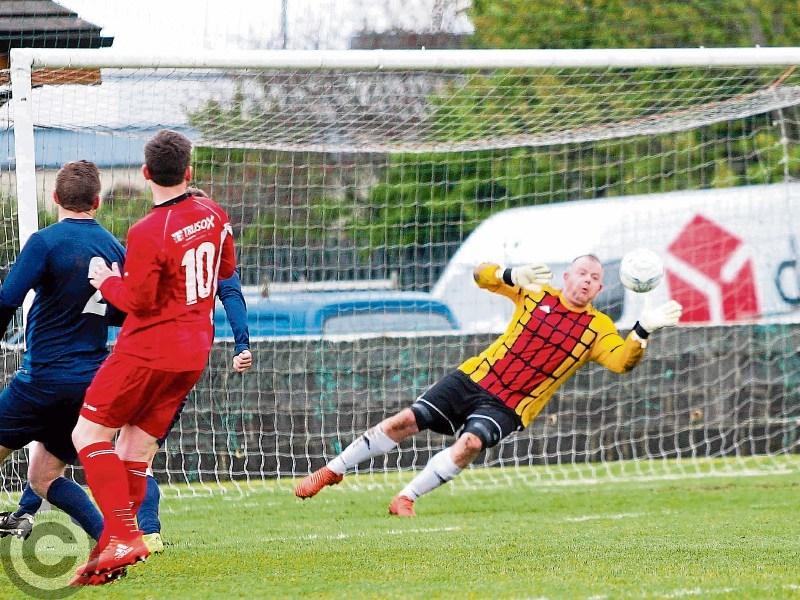 Extra-time was required to separate Manor Rangers and Carbury FC when they met in last Sunday's Glasshouse Cup Final in a windswept MacSharry Park.

While there was much to admire about Manor Rangers' performance, particularly the organised manner to their set-up, they can have few complaints as Carbury bossed matters and only for the heroics of goalkeeper Paul Scanlon would have ensured victory inside the 90 minutes.

A defensive back three of Anthony McDonald, Ciaran McLoughlin and Thomas McDonald provided solidity in the opening exchanges as Manor were happy to allow Carbury to dictate matters in terms of possession.

Despite Carbury bossing matters in terms of possession it was Manor who had the first sight of goal when they struck dangerously on the counter.

Brian McDonald was released behind the Carbury defence but his shot from the edge of the box was comfortable saved by Carbury's Mark Rooney.

Carbury quickly regained their composure and went on the front foot immediately. A dangerously floated corner was punched by Paul Scanlon but only as far as Gary Armstrong whose snapshot from the penalty spot was wide when he really should have tested the Manor goalkeeper.

Approaching the midway point in the first half Carbury had another excellent opportunity to open the scoring but were to be denied by the woodwork.

Colm Jinks did brilliantly to create space in the box but his curling effort clipped the top of the crossbar to the relief of the Manor defenders.

Gary Finan was next to go close but his shot from the edge of the box was dragged narrowly wide.

An immediate counter-attack saw Manor go up the other end of the pitch with Brian McDonald once again finding himself behind the defence. Unfortunately he seemed to be torn between whether to cross or shoot and his effort proved of no concern to the Carbury defence.

The second half started in the same vein with Manor looking to catch their opponents on the break and just three minutes after the restart they almost did exactly that. Carbury's attempt at an offside trap was easily undone by Brian McDonald's run and an excellent through-ball.

McDonald had the option of releasing the ball to his left and the unmarked Ruadhan Feeney but opted to go alone only to see his progress halted by an excellent tackle on the edge of the box.

It didn't take long for Carbury to rediscover their groove and once more they came close to opening the scoring but Niall Brennan's shot just missed the top corner of Paul Scanlon's goal.

Moments later Gary Armstrong went even closer for Carbury but he was thwarted by a fine stop from Scanlon.

With 20 minutes of the second half played Armstrong, one of a number of Carbury players with League of Ireland experience, beat three defenders before unleashing a shot from the edge of the box which was brilliantly blocked by Anthony McDonald.

Manor Rangers were being pushed further and further into their own half but in the 67th minute they came agonisingly close to finding a breakthrough. After Ruadhan Feeney's shot was blocked, the ball fell kindly for Alan Hickey but his strike was straight at Carbury goalkeeper Mark Rooney.

That chance proved to be no more than a temporary reprieve for the Manor defence as Carbury went back on the attack. Niall Brennan was denied by Scanlon and moments later Scanlon was required to be at his best to deny Aaron Murren's fiercely struck left-footed effort.

The final 15 minutes saw Carbury further increase the pressure but despite the best efforts of Gary Armstrong, Niall Brennan and Steve Feeney, who saw a header cleared off the line, they were unable to find a breakthrough.

Having given their all the Manor players had to contend with the prospect of an additional 20 minutes as the game went to extra-time in the search of a winner.

After 90 scoreless minutes the deadlock was broken three minutes into extra-time. Niall Brennan and substitute Gareth Kelly linked up brilliantly with a clever one-two and when Brennan found himself with the ball at his feet in the penalty box he calmly rolled the ball past Scanlon and into the bottom corner of the goal.

The fatigued Manor players struggled to find any response and in the opening exchanges of the second half of extra time the result was put beyond doubt when Carbury were awarded a penalty following a foul by Thomas McDonald on Niall Brennan. Aaron Murren took responsibility for the spot kick which he dispatched low and hard past Scanlon to ensure victory for his side.

With time running out and facing a huge uphill struggle Manor could have been forgiven for accepting their fate but to their credit they produced a spirited finale in the hope of getting back into contention.

However, the closest they would come was from a Paddy Woulfe free that was saved by Mark Rooney as Carbury saw out the contest to claim a deserved victory following an impressive performance.

HIGHLIGHT - Many of the games standout moments featured the Carbury attacking players linking up close to the Manor Rangers penalty box. Former Sligo Rovers players Mark McGoldrick, Gary Armstrong, Colm Jinks and Gary Armstrong produced some fabulous passages of play but throughout the initial 90 minutes they were unable to get the better of Paul Scanlon.

LOWLIGHT - Manor Rangers could be criticised for being overly cautious in how they set-up against Carbury but it is worth remembering that the Sligo town team have been in incredible form throughout the season. They have won all 13 of their super league games, conceding just five goals. For spectators in MacSharry Park the unseasonable weather was the lowlight as it made for a cold afternoon on the sidelines.

TURNING POINT - The opening goal was always going to be of huge importance. Had it gone Manor Rangers' way it would have provided a real morale booster and given them something to protect. When Niall Brennan opened the scoring early in extra-time it became increasingly likely that it would be Carbury's day.

MAIN MAN - Anthony McDonald, Ciaran McLoughlin and Thomas McDonald worked well for Manor in a defensive back three, frustrating countless Carbury attacks. Aaron Hickey and James Glancy added extra steel to the defence and also provided an outlet on the counter-attack from their wing-back positions. Paul Logan got through a huge amount of work in midfield as he protected the centre-backs. Ruadhan Feeney and Alan Hickey didn't see as much of the ball as they would have liked but  couldn't be faulted for effort. Seamus Ryder had a frustrating afternoon as he was well marshaled by the Carbury defence while Brian McDonald's proved a threat on the break. For Carbury Colm Jinks, Steve Feeney, Aaron Murren, Niall Brennan and Gary Armstrong all impressed but it is hard to look past Manor's Paul Scanlon when picking a man of the match.

REF WATCH - Paul Kilcoyne refereed sensibly throughout with the big decision of the game, a penalty for Carbury, being a straightforward one. Niall Brennan was ready to pull the trigger when he was fouled by Thomas McDonald leaving the referee with no alternative but to award a penalty.

WHAT'S NEXT - Attention now returns to the Super League. Carbury currently sit at the top of the table, with a three point lead over Strand Celtic [who have played three games more]. Carbury will be looking to maintain their 100% record in the coming weeks while for Manor the objective will be to pick up as many points as possible from their final three games with second place  still within their reach.