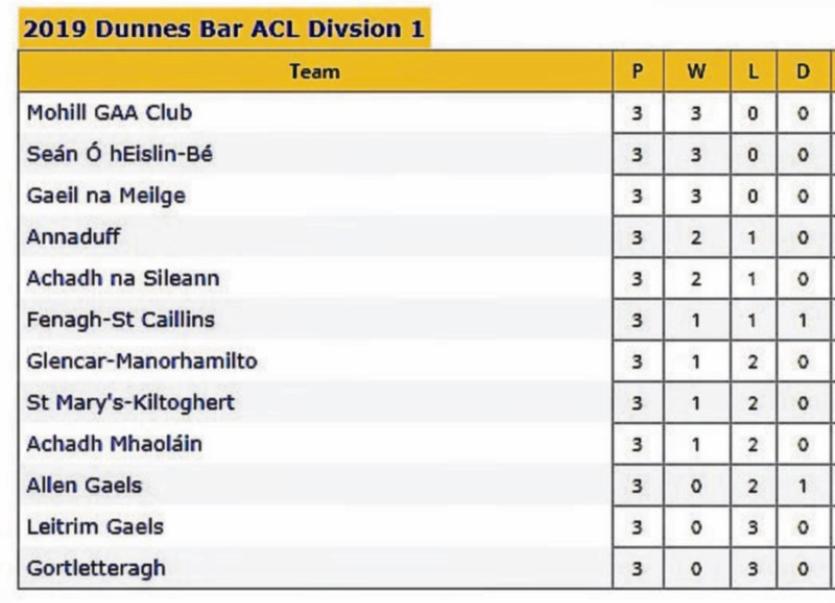 Alarm bells may have been sounding in Manorhamilton after the first two games in this year's Dunnes Bar division 1 campaign but they were resoundingly silenced last Saturday when the north Leitrim men handed County champions Aughawillan an thorough hammering.

Aughawillan had looked as if they were starting the league campaign in fine form but back to back losses to Aughnasheelin and now a 24 point loss at the hands of Glencar/Manorhamilton on a 6-19 to 2-7 scoreline must raise some concerns.

With their small numbers, Aughawillan have traditionally started slowly in the league but the scale of last Saturday's loss in Boggaun is such to prompt one to wonder when was the last time the champions suffered a loss of this scale.

For Glencar/Manor, the victory is a huge morale boost and gets them back on track after two demoralising losses to Melvin Gaels and Annaduff and they will head into the mini-break of games in a much better frame of mind.

League leaders Mohill had their expected win over Leitrim Gaels last Saturday but it was much, much closer than expected with only two points between them at the finish on a 0-20 to 3-9 scoreline.

Mohill led 0-12 to 2-5 at the break and were pursued all the way during a lower scoring second half. The Gaels may sit without a win so far but they were desperately unlucky against St Mary's and they have pushed two of the favourites for the senior championship all the way to the finish line.

Ballinamore Sean O'Heslin's remain in second place following another impressive win, this time a 1-18 to 1-6 win over an Annaduff team suffering their first loss of the campaign.

Incredibly, Annaduff keeper Darragh Burke was their man of the match as he saved two spot kicks to give you some idea of the scoring power at the disposal of new Ballinamore manager Dominic Corrigan.

After the destruction inflicted upon them by Mohill and Aughawillan in the first two rounds, Allen Gaels showed welcome signs of resilience as they fought back from the dead to grab a draw against Fenagh St Caillin's on Saturday, 1-12 to 2-9.

The Drumshanbo men led 0-5 to 0-4 at the break and were level with Fenagh coming towards the finish when last year's intermediate champions won a penalty, duly converted. But instead of caving in, the Gaels showed welcome signs of promise to hit three points from play to grab a deserved draw.

James Phelan's Melvin Gaels continue to impress as they accounted for St Mary's at home last Saturday evening, winning 3-10 to 1-12. The Gaels set the tone with a goal inside the first eight minutes and despite the Carrick men hitting the net themselves, the home side hit two goals before halftime to lead 3-6 to 1-6.

The scores were tit for tat during the second half with the Kinlough men maintaining their six point lead and it was only towards the final ten minutes that St Mary's grabbed two late points to cut the gap to four points at the finish.

The final game of the weekend saw Aughnasheelin score another huge win when they defeated Gortletteragh 1-15 to 2-8. After their first round hammering at the hands of Annaduff, Aughnasheelin have made light of their small numbers to shock two more highly fancied teams.

To show their win over Aughawillan was no fluke, they followed up last Saturday with a four point win over Gortletteragh, 1-15 to 2-8, cementing fifth place in the table and consigning Gortletteragh to a third straight defeat.

Having lost to both Melvin Gaels and Fenagh St Caillin's, Gortletteragh will be getting worried that their stay in the league's top flight could come to an end this year.

Division 1 now takes a break until after the Connacht championship clash with Roscommon on Sunday May 12. The next round of games are provisionally fixed for the weekend of May 18/19. 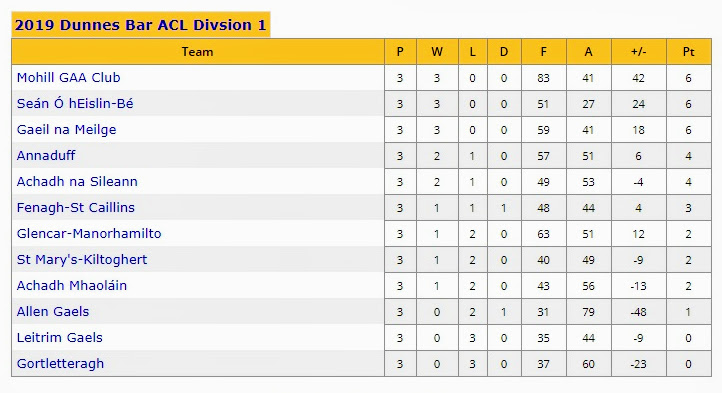