Drumreilly set the pace but pack are lurking right behind them 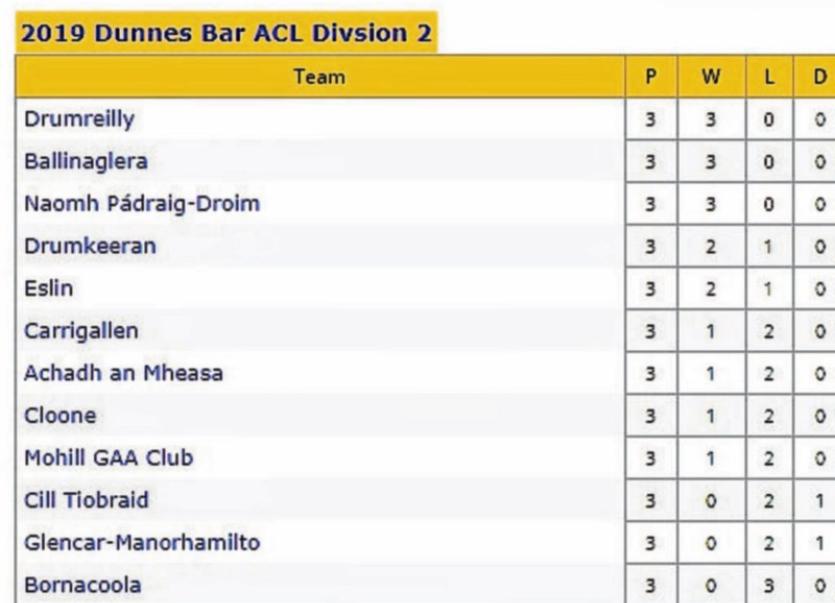 Surprise packets Drumreilly continue to set the pace in division 2 but there is a pack of teams lurking right behind as much stiffer tests await.

Following on from their victories over a struggling Kiltubrid and Mohill's second string, Drumreilly showed they will take some shifting off the top of the table as they defeated Cloone by 11 points on a 3-14 to 0-12.

The 11 point winning margin was important as they leap-frogged Ballinaglera into top spot at the top of the table with a scoring difference of plus 34 to Glera's plus 32; Ballinaglera winning at the weekend but having only a point to spare against a Carrigallen who are blowing hot and cold.

Carrigallen had an easy win over Aughavas before suffering a demoralising loss at the hands of Eslin but then pushed the undefeated Ballinaglera all the way to the final whistle.

St Patrick's Dromahair remain level on points with the top two after three games following their four point, 1-16 to 1-12 win over Kiltubrid. This was a tougher game than expected for the north Leitrim men as Kiltubrid seem to be finding their form.

Right behind the undefeated top three come Drumkeerin and Eslin. Eslin recorded a comfortable seven point win over Aughavas and it would be fair to say you couldn't write them off when it comes to the battle for the top four places.

Drumkeerin put a badly struggling Bornacoola to the sword rather easily, their 4-17 to 0-8 victory giving them the best scoring difference in the division with plus 49 points, a factor that could be very important if the division continues to remain as tight as it is.

As it stands with a quarter of games played Drumreilly, Ballinaglera, St Patrick's Dromahair and Drumkeerin would qualify for next year's division 2 league along with, Aughawillan, Allen Gaels, Leitrim Gaels and Gortletteragh from division One.

Of course, nobody expects it will remain like that but it does highlight the importance of not dropping points in this division. 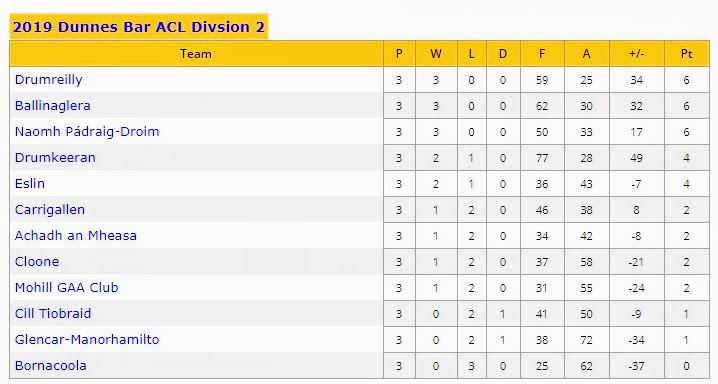