St Brigid's scoring power too much for St Joseph's 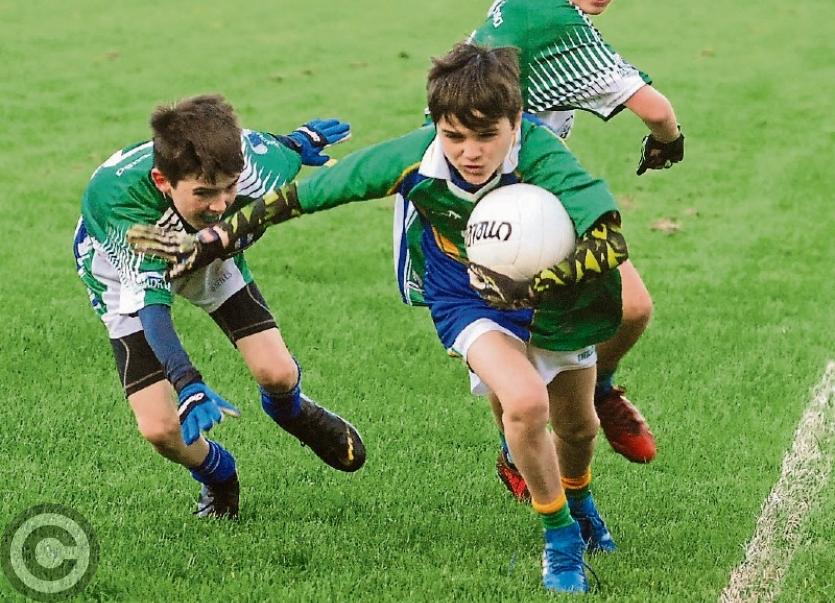 St Brigid's claimed the Barna Recycling U13 League Division 2 title at the second time of asking as they had too much scoring power for St Joseph's in St Mary's Park Cloone last Friday evening.

These teams had fought out a really entertaining draw a week previously but once St Brigid's found their feet in this game, they always looked the more likely winners.

Brigid's didn't have it their own way as St Joseph's took the lead early in the second half but St Brigid's were able to respond to everything that was thrown at them, even a second goal from the Carrigallen and Aughavas man didn't know them off their stride.

Matthew McCabe had the first shot as he forced a save from Brigid’s keeper Mark McNiff less than half a minute into the game. Jamie Plunkett pointed after a lovely pass from Peter McNiff but Joey McBrien fired over a good free to level on four minutes.

Peter McNiff pointed after a quick free and St Brigid’s seemed to be taking control with Jack Prior pointing from an incredible angle almost on the endline. Both teams missed goal chances but St Joseph’s did get a score from a fifty, McBrien firing over on 12 minutes.

The McNiff-Plunkett axis continued to produce the scores for St Brigid’s who were growing increasingly dominant with Peter and Jamie scoring nice efforts. St Brigid’s missed a couple of good goal chances as Plunkett and sub Ryhan Akbar both blazed wide.

The half ended with Plunkett and Joey McBrien swapping points as St Brigid’s led 0-6 to 0-3 at the halftime break, a lead quickly increased when Peter McNiff scored a fine point early in the second half.

St Joseph’s started to close the gap with Matthew McCabe hitting two excellent points in the space of 60 seconds and it looked as if the Carrigallen and Aughavas combo were on the road to victory when they struck for a goal three minutes into the second half.

A high ball into the St Brigid’s goalmouth came off keeper Mark McNiff and Cian Nolan was on hand to force the ball home from close range.

Instead of collapsing, St Brigid’s replied in devastating fashion - Jack Prior finished off a great team move with a point before Jamie Plunkett fired over a good score. Then came a goal for St Brigid’s when a high ball into the goalmouth was deflected into the net by Peter McNiff.

Daniel Houston put over a free to leave St Brigid’s five points clear on 11 minutes but a minute later, St Joseph’s put the game back in the mix when Eanna McNamara’s fifty was fisted to the net by Cian Nolan for his second goal.

Two minutes later, Joey McBrien converted a free to leave just a point in it but St Brigid’s managed to steady themselves and Jamie Plunkett capped a lovely run with a fine point on 18 minutes.

An interception from Darragh McNiff led to a run and great point from Cormac Moran and suddenly St Brigid’s were on top again. Jamie Plunkett brought his tally to six points with a fine effort before Cormac Moran finished the scoring in added time with a fine point.

It could have been a much closer finish had Brigid’s keeper Mark McNiff not made a fantastic full length diving save to deny Eanna McNamara a goal just seconds into added time.

MAIN MAN - Lots of good performers from both teams. Joey McBrien was always a threat for St Joseph's while Jamie Plunkett was outstanding for St Brigid's as was Peter McNiff. St Brigid's probably had more players who stood out with Andrew Hewson, Brian McGovern and Cormac Mahon all doing well but the outstanding player on the field came was Eanna McNamara from St Joseph's who showed that his size didn't mean a lack of skill.

TURNING POINT - St Joseph's looked as if they were taking control when they struck 1-2 in a three minute spell early in the second half. But two points and a goal from Peter McNiff turned this tie firmly back in St Brigid's favour and despite a second St Joseph's goal, the winners never looked back.

TALKING POINT - St Brigid's may have been the physically smaller team but they showed that small players with skills and a willingness to work hard are just as effective as bigger opponents. St Joseph’s may  also wonder why they didn't move Eanna McNamara further up the field much sooner than they did - he caused problems when moved to midfield late in this entertaining final.