Terry sets sights on another breakthrough 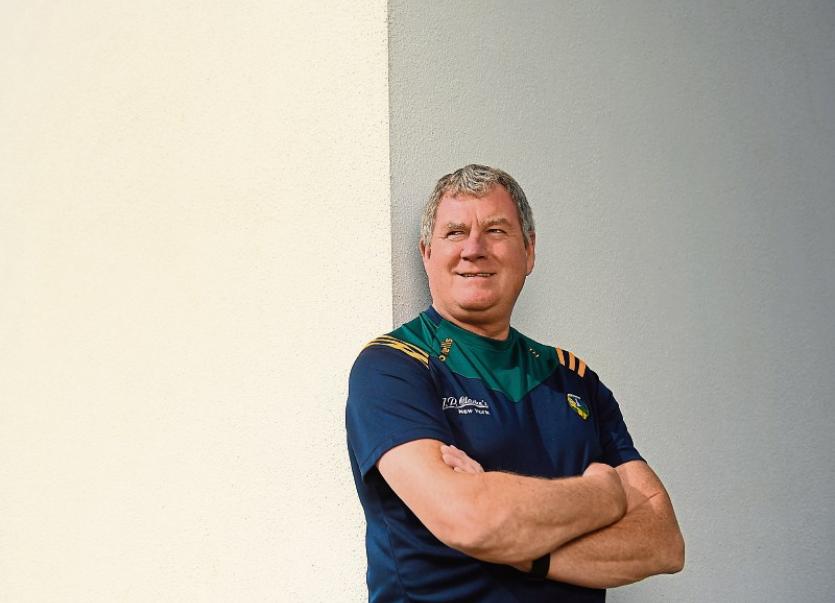 Leitrim manager Terry Hyland, pictured at the launch of the Connacht Championship, is looking to build on the county's success in the league Picture: Sportsfile

Life must be pretty good for Terry Hyland right now; promotion achieved, the county is on a high and 2019 already judged a massive success. But just don't tell his players that!

“Well don't tell the players that,” pleaded a laughing Terry ahead of next Sunday's Connacht Senior Football Championship clash in Dr Hyde Park (3.30 pm throw-in) when you suggest, reasonably enough, that 2019 has already been a massive success for Leitrim.

Any pressure that might have existed is long, long gone after Hyland led the Green & Gold to promotion in the national league but the Cavan man, relaxed and at his ease at the launch of the provincial championship, has set his sights on even more ground-breaking achievements.

The Cavan native is fully determined that Leitrim's players will not rest on their laurels: “Perhaps Leitrim set their stall out as 'the league is their championship' which is a dangerous thing. I could see an element of that coming in and I could hear that from people in Leitrim.

“That is why I said, 'don’t tell the players' because there is an element of 'the league is our championship' suggests the league is the only place we can compete, this is our level. That’s my job to dispel that.”

Spend any time with Hyland and you quickly sense that Leitrim travel to the Hyde with the belief they can compete with Division 1 Roscommon and while he might have preached league, league, league earlier in the year, the focus has switched quickly and smoothly.

“The league is about producing your average performances over the games but championship is not, this is where the real test of character comes. It is a big game for Leitrim and they need to see it as a big game.

“Leitrim have that ability to compete. You would hope the league will give them the confidence. There were days when we were getting the results butweren’t getting the performances. For the championship, we need to get the performance to get result.”

The manager might be an outsider but it seems that he has been well versed in just what the Leitrim and Roscommon rivalry means to those dressed in green!

“The Roscommon rivalry seems to hold a special place - I’ve found that out. If you happen to mention certain people and certain areas, you couldn’t print all the words that have been said to me shall I say!” recounts a diplomatic Hyland.

“That is the great thing about it; the tribal thing about football, it drives it on and has kept it so successful for the last 130 years or whatever it is. It is all about that locality and it doesn’t really matter how big you are or how small you are, you are always going to have that little pep in your step when you come to meet your neighbour.”

Unfortunately, the rivalry has been quite one-sided over the last four or five years with Roscommon breaking records on their way to 17 and 14 point victories in the last two years.

Expectations among Leitrim fans might start at a low point, even after the highs of Croke Park and promotion but Terry doesn't seem to have got the memo!

“Management is about facilitating people, you are supposed to facilitate people to get belief in them and change their outlook on where they are going and what they want to do. It has worked for the league but the big test is going to be the championship.”

Facilitating, making players better, enabling them to believe and perform and win games are all buzzwords managers might use but when you ask Terry to look back over the league and pick out what surprised him most about his own players, the word 'resilience' comes up and it is no accident.

“Their resilience; that should stand to them come the championship. There were games where we got a result but we didn’t get a performance but, at the end of the day, it is about the result and that is what you’ve got to keep telling lads.”

Using an analogy from the world of athletics, Terry believes that Leitrim's very resilience is what will enable them to strike next Sunday: “It is like when you come around that last bend leading the pack or sitting fourth, knowing you can sprint to win the race - that’s where these lads have been during the league and they’ve seen that and it will be no different against Roscommon.

“They got to dig in and hang in there because there will be times when they come under the cosh; there will be times when Roscommon look as if they are going to fly away with it. But we have to get that belief factor that they have to hang in and that when you are coming down the finishing straight, if you are within touching distance, anybody can win that game.”

Not for a minute, however, is Terry taking the challenge of Roscommon lightly and the years spent by the Rossies in Division 1, competing against the top teams, gives them an advantage Leitrim will have to work extremely hard to overcome.

“That is the challenge for Leitrim going forward and in fairness to the previous management, they brought in a S&C programme to make the lads stronger and more physical. But these Roscommon lads are five or six years down that road and we’re maybe 18 months down that road - we’ve a lot of catch-up to do.

“But if we can hang in and compete and don’t let any gaps get into the thing, that last ten minutes, I don’t think Leitrim are any less fit than anybody else.

“They may not be as physically big and there is more bulk on these teams that are playing at the higher end of things but we’ve proved during the league that we can hang in there and get across the line. Fitness wasn’t an issue for us at any stage and I’m hoping it will be the same against Roscommon.”

That sort of confidence is unusual around a Leitrim team and Terry agrees that it took performances first to build up the confidence of his troops: “Players are no different from modern society - gone is the day when you are told something is there and you’ll believe it whether you see it or you don’t, touch it or can’t touch it.

“We live in a society where you have to see the finishing line and then feel you can get across it, to physically touch something to understand that we can do that. These lads have seen that they can reach the finishing line.

Winning definitely changes how a team sees itself: just look at Dublin's footballers and Limerick's hurlers ploughing away for years with heartbreak after heartbreak before one big breakthrough transformed the mindset for every more.

Hoping that promotion from Division 4 will do the same for Leitrim, Terry stresses that he and his management team worked hard to engineer the sort of harmony and team spirit more common to club teams in this Leitrim set-up.

“We would have concentrated on that maybe more than other teams would have. I did it in Cavan, don’t get me wrong, every county does it. You can throw 30 fellows into a room and I’ll guarantee if there are three fellows from one club and two lads from another, they’ll all sit in their own little pockets.

Winning is where it is at but just don't expect the old blood and thunder approach next Sunday. The sight of the Roscommon jersey might inspire Leitrim but Terry believes it will take more than that to win: “We’d be hoping there’d be a little more science to it than that! If that was the case, I’d hang a yellow jersey up there before the guys every evening at training.”

Terry has preached belief throughout the interview and it is his belief that shines through as it draws to a close: “I don’t wish to sound cocky but any game you are going into, you are looking to win it. Otherwise, you are in the wrong job.