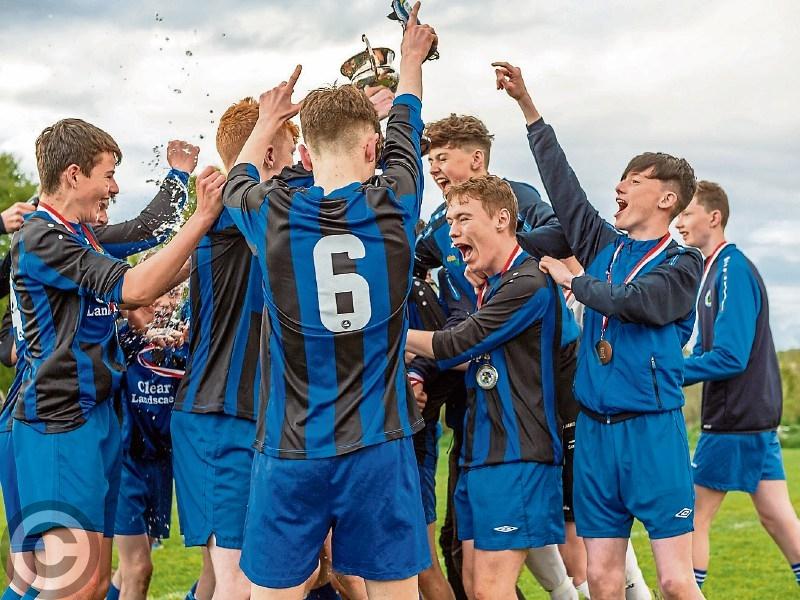 Manor Rangers brought the curtain down on their U16 season on Friday evening last in the Bee Park when they saw off the challenge of Valley Rovers to claim the Sligo/Leitrim U16 league title.

After their heroics less than a week earlier in the Connacht shield final, hopes were high in Drumshanbo and the surrounding areas that a second piece of silverware could be returning to the club but they could have no complaints as Manor Rangers emerged deserved victors after a hard fought encounter.

A first half penalty from Alan Kavanagh was followed two minutes into the second half by a wonderful team goal that started with goalkeeper Ben Gavin and finished with Cathal Óg O’Connell finishing in style.

Manor's third goal arrived with over 20 minutes remaining and proved to be a goal worthy of winning any game. In a week that saw memorable goals from Jack Keaney and Daryl Fordyce as Sligo Rovers defeated Shamrock Rovers and then an outrageous strike from Vincent Kompany for Manchester City and all the drama of the champions league, Matthew Connolly produced his own moment of magic.

When the ball broke 25 yards from the Valley Rovers goal, the Manor centre-back ran on to the loose ball before quickly assessing his options. He quickly came to the conclusion that the best bet would be to strike for goal and it proved a wise decision as his shot flew past Conor Moran and into the corner of the goal.

Valley kept battling but with James Clinton doing an incredible job nullifying the threat of Radek Oberwan it was difficult to see how they could get themselves back in contention.

The Geevagh based club, many of whose players hail from Drumshanbo, enjoyed their fair share of possession as they looked for a way back into contention. Set pieces looked as though they would provide the best opportunity for a way back into the contest for Valley and that proved to be the case with a quarter of an hour remaining.

There was plenty of activity at the back post with Radek Oberwan occupying the attention of the Manor defenders but when he moved to a more central position Conor Flood was left free at the back stick to head Thomas Flynn’s corner past Manor Rangers' substitute goalkeeper Shaun Sheridan.

Although they gave their all Valley Rovers were unable to close the gap any further and the final scoreline was ultimately a fair reflection of the 80 minutes of action.

Throughout the game Valley struggled to get Radek Oberwan into the game in the same way they had the previous weekend against Moyne Villa. That was due to the fact that Cathal Óg O’Connell and in particular James Clinton were immense in midfield.

Even when Oberwan was deployed as a forward in the second half, Clinton followed his every move to nullify his threat while Clinton was also hugely instrumental as an attacking force.

Valley were the first to threaten when Ciaran McMorrow delivered a dangerous cross into the Manor box but his cross was just too high.

Having survived that early scare, Manor went on the front foot with James Clinton seeing a well struck shot blocked after clever play from Diarmuid Giblin.

The next chance of note saw Clinton turn provider as he created an opportunity for Cathal Óg O'Connell but his effort was saved comfortably by Ronan Moran.

Manor's early dominance was deservedly rewarded in the 20th minute when they took the lead. Diarmuid Giblin's clever, scooped pass found Gabriel Gilbride who tried to evade the attention of a Valley defender.

His progress was halted but referee Richie Barry immediately signalled for a penalty as a result of a handball. Alan Kavanagh took responsibility for the spot kick and made no mistake with a powerful finish to the goalkeeper's left.

Valley responded well and enjoyed their fair share of possession but found it difficult to create clear cut opportunities to trouble Ben Gavin in the Manor Rangers goal.

A well struck free from Conor Flood from 25 yards out dipped viciously before landing on the roof of the net.

Nine minutes before the break Manor thought they had doubled their advantage when Diarmuid Giblin headed past Ronan Moran after Gabriel Gilbride's effort had squirmed free. Fortunately for Valley, Giblin was adjudged to have been in an offside position and the goal was wiped out.

There was to be no further breakthrough before the interval but less than two minutes after the restart Manor had scored the much sought after second goal.

Goalkeeper Ben Gavin's short kick-out found Matthew Connolly in space and his ball up the line to Diarmuid Giblin turned defence into attack in the blink of an eye. Giblin showed great pace and trickery to beat his marker before delivering a dangerous cross that was brilliantly finished by Cathal Óg O'Connell.

Valley moved their dangerman Radek Oberwan up front as they sought a way back into the contest. On one of the few occasions he escaped the attention of James Clinton he was denied by Ben Gavin who stood tall before making a fine save with his feet.

Valley Rovers reduced the deficit when Conor Flood headed home from a corner with 15 minutes remaining but there was to be no denying Manor as they held on for an impressive victory.

Turning Point - Valley Rovers had every reason to believe they were still in contention at the interval but shortly after the restart Cathal Óg O'Connell applied the finishing touch to a great move.

Ref Watch - There were no complaints from the Valley Rovers contingent when Richie Barry awarded a penalty to Manor Rangers and overall the man in the middle had a good game.

Highlight - Matthew Connolly's strike was worthy of winning any game while Cathal Óg O'Connell's strike came at the end of a fine team move.

Lowlight - After the highs of their Connacht triumph Valley will be disappointed in defeat but they can take great heart from a memorable season.