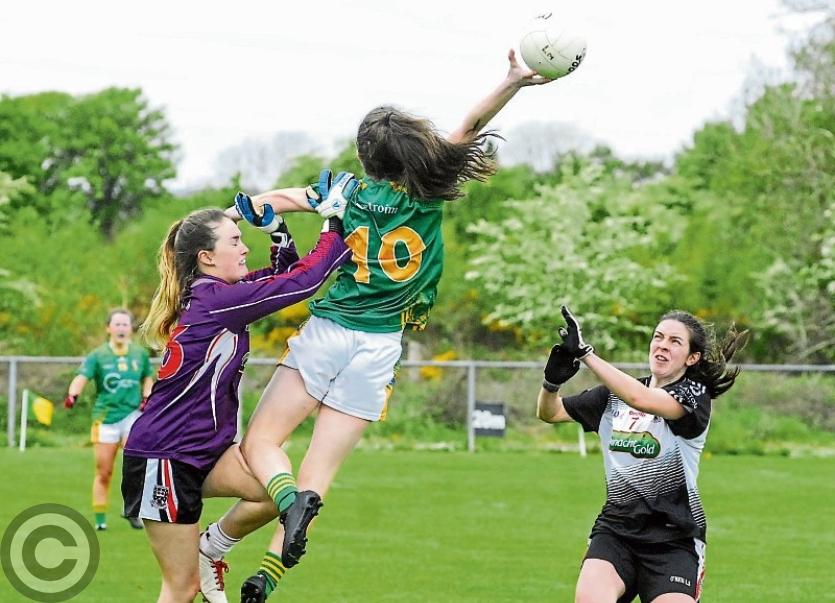 An airborne Carla Le Guen tries to get to the ball ahead of Sligo keeper Rachel Quigley. Picture: Willie Donnellan

No more than their male counterparts later in the day, Leitrim ladies found that league football does matter and it matters when it comes to finishing as an efficient Sligo proved comfortable winners in Tourlestrane.

Leitrim's first championship appearance in two years went along expected lines as Division 3 finalists Sligo just had too much experience and forward firepower for the Division 4 Leitrim.

But there were some small signs that Leitrim might just be setting some solid foundations for the future as they battled right to the final whistle and kept Sligo honest despite never looking like they would upset the Yeats women.

Sligo's full-forward line of Emma Keavney, Katie Walsh and Lisa Casey looked as if they could score every time they got the ball and the ball winning of Ruth Goodwin, Sinead Regan and Bernice Byrne meant that Leitrim were never able to build the sort of momentum they needed to cause problems.

It was only when Sligo withdrew Byrne and Goodwin and Regan was sin-binned that Leitrim were able to gain the upper hand and they showed what they could do, hitting 2-3 in the final ten minutes plus injury time of action.

Despite the defeat, this was a big step for the county to get back in championship action and what a lot of new players learned from the experience will stand to them in good stead. It may not make an impact for Leitrim next Sunday against Roscommon but if they can keep this side together, progress can be made.

Sligo got off to a flying start with three points in the first five minutes, Emma Keaveney, Lauren Boles and Katie Walsh (free) all on target as Sligo also missed two chances, Michelle Heslin hitting a wide for Leitrim.

Michelle Heslin did open the Leitrim account with a seventh minute point and despite wides from Vivienne Egan and Heslin, Leitrim pulled to within one with a bizarre free awarded when Sligo delayed over their own free and Bronagh O’Rourke pointed.

Unfortunately, that was as close as it got with a quick free finding Sinead Regan charging through, her offload finding an unmarked Keaveney for an easy goal 12 minutes in. Katie Walsh followed up with a free, Keaveney had an audacious shot that clipped the top of the crossbar and Walsh put over another free to leave Sligo seven clear.

Carmel McGovern saw a shot for a point dip and rebound off the crossbar, a throw-ball awarded as it appeared the referee had already blown for a point. Keaveney blazed a goal shot wide before Bronagh O’Rourke converted a free.

Leitrim went looking for a goal but Edel Kelly saw her shot blocked by the keeper and a defender out for a fifty but Roscommon increased their lead with an unanswered 1-2 in the final five minutes.

Katie Walsh turned her marker before setting up Laura Casey for a clinical goal and Casey added two points to leave Sligo with a commanding 2-8 to 0-3 halftime lead.

Leitrim came out with a lot of energy in the second half but only had a Vivienne Egan point to show for their efforts as they hit wides and couldn’t break through the Sligo defence. Laura Casey pointed excellently from a very tight angle before Sligo hit two points in the space of just two minutes.

First game a Sinead Regan point after a very good move and then her fellow midfielder Ruth Goodwin charged through the centre for a good point.

Leitrim did hit back, albeit with a slight bit of good fortune, when Bronagh O’Rourke’s 30 yard free dipped at the last moment and evaded the grasp of Sligo keeper Rachel Quigley under pressure from Vivienne Egan and squirmed into the net.

Sligo’s response was devastating as they hit 1-2 in the space of two minutes, Laura Casey driving the ball over the bar when a goal was on, Katie Walsh tapping over a free while a brilliant team move ended somewhat bizarrely when Walsh bounced the ball ahead of keeper Michelle Monaghan, it bounced over her head and Walsh tapped the ball to the net.

With the game well and truly over and Sligo emptying their bench, Leitrim finally found some momentum and Michelle Heslin drove over a good point before sub Shauna McGrath got on the end of a long ball and fired low to the net.

Unfortunately, Sligo’s response was a fourth goal, coming when sub Una Higgins burst through and fired a speculative shot at the Leitrim goal, the ball unfortunately deceiving keeper Monaghan with the bounce to end up in the net.

Kate Walsh first over a lovely long range point to complete her day’s work but Leitrim put a bit of a gloss on the scoreline as an unanswered 1-2 in added time cut the gap to 11 points.

The goal came when McGrath crossed the ball across the face of the goal, Vivienne Egan saw the keeper and a defender make the block but sub Sarah McLoughlin was on hand to plant the ball in an empty net.

The finish was not without cost as Michelle Heslin injured her ankle and had to be replaced but her sister Aine tapped over two late points, one from a free, to leave Sligo comfortable winners.

Main Woman - Sligo dominated most of the key positions particularly in the full-forward line but you couldn't fault the efforts of keeper Michelle Monaghan who had some great kickouts while Claire Owens, Shannon O'Rourke, Aoife Gilmartin, Eilish O'Dowd and the Heslin sisters and Vivienne Egan all had their moments

Talking point - Ladies football at senior inter-county level is at a low ebb at the moment but this was a good starting point. Sligo were simply the better side and wasted some good chances but their league position was reflected in their performance. A new look Leitrim will take a lot from this performance and while it may take a while, Leitrim will turn the corner. Indeed, they have a history of rejuvenating themselves in quick fire order but this project will take some time. Also great to see former All-Star Sarah McLoughlin back in the Leitrim colours, grabbing a late goal into the bargain. Her experience will only be a benefit to a young and inexperienced Leitrim outfit.

Turning point - Sligo's first goal was a killer blow after Leitrim had recovered from a quick Sligo start to trail by just a point after ten minutes. But it was Sligo's second goal from corner-forward Lisa Casey that really put a dagger in the heart of the Leitrim challenge, giving Sligo an 11 point halftime lead.

Ref Watch - Mel Kenny didn't have too many controversial decisions to make and only showed one yellow card to a Sligo player, albeit it looked like a harsh enough call.

Highlight - Shauna McGrath's goal for Leitrim was a sign of what Leitrim could produce when they moved the ball quickly and accurately.

Lowlight - The ease which Sligo got their scores, and goals in particular, must be a worry.

What's next - Leitrim take on Roscommon next Sunday at St Mary's pitch in Carrick with the winners qualifying for the Connacht Final.