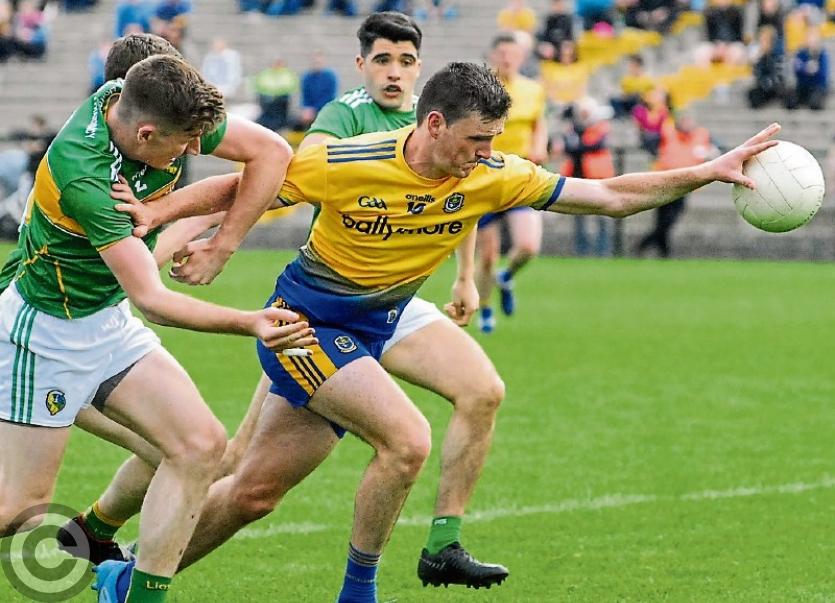 Hard to get the refrain of Talking Heads' classic song “Once in a lifetime” out of my head for the last few days when it comes to writing this report, for it definitely seems “Same as it ever was” when it comes to Leitrim taking on Roscommon.

You'd have thought we'd have gotten used to big beatings with an average losing margin of 13.4 points over the last five meetings in Connacht Senior Championship games against Roscommon.

This time we travelled with hope and a belief that this Leitrim team could finally test the Rossies, turn the game into a battle and take something positive from the encounter in Dr Hyde Park. Instead, we got a thumping that left us singing “Same as it ever was” over and over again.

But this time felt different and very definitely worse. I expected Roscommon's strength would prevail on the day but even the 14 point winning margin doesn't tell the full tale as Anthony Cunningham's side could and should have had about four more goals in the first half alone.

We missed chances too, Shane Moran desperately unlucky in the very first minute with a chance that might have settled Leitrim, Ray Mulvey seeing an effort tipped over but even then, you sensed that Roscommon would have had an answer to anything we threw at them.

Two goals were on the scoreboard for the home side after just 15 minutes but a rampant Roscommon saw Diarmuid Murtagh denied a goal chance by a fantastic Fergal McTague block, Cathal McCrann made a superb save from Ultan Harney and Shane Killoran slipped just as he was pulling the trigger on a third effort.

Pace and physical strength were the defining characteristics of this game and Roscommon's advantage was immense as all three of their goals came with Rossie players running through Leitrim tackles before planting the ball in the net.

Leitrim's league run had caused this writer and many others to dream but last Sunday, we witnessed what real power in gaelic football is and we have a lot of work to do to get anyway near where Roscommon currently are.

The scary thought is that Roscommon are not quite regarded as among the very elite of teams, Galway and Mayo favoured ahead of them in the province whatever about the Dubs, Donegal, Kerry, Monaghan and Tyrone.

Leitrim almost had the perfect start when Shane Moran caused consternation under a high ball, brilliantly working a close range goal chance but his shot was smothered by keeper Darren O’Malley in one of those heartbreaking 'what if' moments.

Roscommon weren’t fully firing with three wides in as many minutes but they showed what they could do on five minutes when Conor Hussey’s run through the centre saw him find Shane Killoran unmarked, the Elphin man blasting the ball to the net.

Diarmuid Murtagh almost had a second goal but Fergal McTague managed to get in a vital block to deflect the ball out for a fifty that keeper Darren O’Malley hit well wide.

Ultan Harney tried his luck but Cathal McCrann made a superb full length diving save to concede a fifty, this time O’Malley was successful with the kick.

Ryan O’Rourke opened Leitrim’s account from a free after a foul on Evan Sweeney and a foul on Shane Moran a minute later allowed Domhnaill Flynn to tap over but the goal chances kept coming at the other end.

Barely seconds after a missed chances, Shane Killoran broke through the tackles of at least four Leitrim defenders before planting a spectacular shot past a helpless McCrann on 15 minutes.

Murtagh pointed a minute later and Leitrim were left ruing a missed chance when Sean McWeeney fisted the ball wide with a score for the taking.

Ultan Harney was taken down on the way through and Murtagh tapped over a close range free before Dean McGovern replaced the unfortunate Fergal McTague who had been handed a very unfamiliar midfield role.

A foul on Harney led to a yellow card for Shane Quinn and a successful free for Murtagh on 25 minutes.

A strong Ryan O’Rourke run saw him find Ray Mulvey through on goal but the St Mary’s man close range shot was tipped over the bar by O’Malley on 26 minutes but from the kickout, Roscommon strode right down the middle of the field and Conor Cox fisted the ball over the bar.

Another foul on Moran saw O’Rourke tap over a Leitrim free and from the resulting kickout, Leitrim intercepted and a cynical, or clever depending on your point of view, foul on Moran by Hussey resulted in a successful Flynn free.

But that was as close as Leitrim were to get - another long ball to Murtagh led to another Cox point before Roscommon again exposed the centre of Leitrim defence when Leitrim gifted the ball to Conor Cox from a free.

Cox’s strong run saw him leave several Leitrim defenders for dead and a pass to the unmarked Niall Kilroy allowed the wing-forward fire low to the net after a sidestep.

A defiant Shane Quinn hit back with a massive 50 yard effort while good work from O’Rourke and Moran led to a good point from Pearce Dolan, leaving the halftime score at 3-6 to 0-7 for the home side.

The second half started like the first with a blocked goal chance, this time Conor Cox denied a goal but the Roscommon men came through the middle again for a fine point. Fouls on Shane Moran were proving Leitrim’s main source of scores with one apiece from Flynn and O’Rourke.

Leitrim were trying to create goal chances but Niall Kilroy made a vital block on Pearce Dolan as he sought a goal. Leitrim’s wides were been copied by Roscommon as the game went five minutes before Conor Cox swapped frees with Domhnaill Flynn.

Cox and Andrew Glennon added points from placed balls as the lead suddenly stretched to ten points and the game was over with 15 minutes to go. Leitrim’s cause wasn’t helped by a second yellow card for Shane Quinn, sub Andrew Glennon tapping over his second free.

Ryan O’Rourke had two frees in the closing minutes, the second after Roscommon corner-back Conor Daly picked up a second yellow card for a foul on Shane Moran just into added time. Typically, Roscommon still had time for a response, Fintan Cregg scoring a massive point from a free to leave Roscommon 14 point winners.

Main man -Anyone reading these pages this year knows Shane Moran has been my player of the year and he underlined it last Sunday, causing Roscommon their only real distress. Didn't get the protection his performance warranted but an outstanding outing from the Ballinamore man

Talking Point - This defeat hit hard, hit much harder than the last three years and leaves you wondering if any progress had been made at all. A great league campaign had this writer believing that Leitrim would test their neighbours and while they might not win, they would lay the foundations for improvements in the future. Instead, we got a display that was, quite frankly, far more disappointing that the last three put together. We travelled with hope, with momentum, with a team that had made progress but Roscommon made us look pedestrian and outclassed. I may have slagged a few Rossies about having a hurling manager at the helm over the winter but Anthony Cunningham seems to have taken his team to a higher level with real genuine strength in depth. It is a scary proposition for Leitrim in the years ahead.

PS - I know Limerick's win and strong performances from Wicklow and Waterford might suggest otherwise but last weekend's games were the best arguments for a second tier championship.

Turning point - Not sure there really was one! Shane Moran was unlucky with a first minute goal chance but Roscommon had three wides and the ball in the net inside five minutes. Three more great goal chances were spurned by the home side inside the first 15 minutes but Niall Kilroy's goal before halftime really put the lid on this game.

Ref watch - Sean Hurson did a good job overall and was consistent throughout. Might have punished persistent Roscommon fouling on Shane Moran more severely earlier in the game but he twice turned the “advantage rule” into the “disadvantage rule” for Roscommon as they were breaking free, something that certainly benefited Leitrim.

Highlight - Few and far between for Leitrim apart from Shane Moran's early goal chance. Hard not to be impressed by Roscommon's superb pace and running from deep while a couple of Conor Cox points from distance late on were truly inspiring.

Lowlight - Too many to mention from Leitrim's point of view as the green & gold were bullied and brushed aside by a faster and more physical Roscommon side.

What’s next? For Roscommon, it is Mayo in the Connacht Semi-Final. Expect the Rossies to really test the national league champions. For Leitrim, it is back to the qualifiers on June 8, with the county hoping for a favourable draw.