We have to grow up mentally says Terry 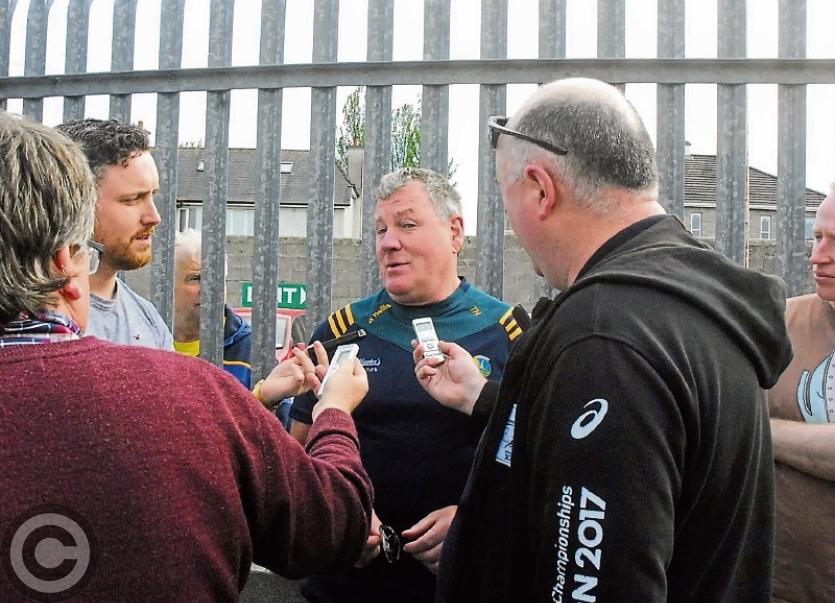 Terry Hyland has told it like it is all through his first year in charge of the Green & Gold and the Leitrim manager didn't change his tune in Hyde Park as he suggested that Leitrim's players needed to grow up mentally if they are to avoid defeats like last Sunday.

Ruefully chuckling when the Observer put it to him that Sunday was not the result he, the players and Leitrim supporters were expecting when they journeyed to Roscommon, Terry replied “Not the result we wanted and it is disappointing when you see margins like that, it knocks the stuffing out of a team.

“That was one of the things that is perhaps ingrained in this group, this is the fourth year in a row it is after happening to them. They have to grow up mentally as well, there is a time when you have to draw a line in the sand and say no more. Perhaps after today, they have to do that.”

The Leitrim manager was far from putting the boot into his players, far from it, he was stressing that his charges would have to get used to playing faster and harder and simply thinking faster: “They reacted a lot faster and that is from playing football at this level. You could compare it to playing junior football and you bring a junior club team in to play a Senior club team and you see the difference.

“Because these guys haven’t played at this level, it is all about the mental state, the mental reaction and Roscommon mentally reacted. If you look at the third goal, we made a mistake, we gave the ball away, we didn’t need to give the ball and the next thing, we got punished and the ball is in the back of the net.

“We had two or three goals chances in the first half that we didn’t take. Now you may say they were full goal chances or even half chances but the difference is, even with a half-chance, if the opportunity is there, you have to take it.”

Stressing that improvements must begin in club football within the county, Terry emphasised the mental aspect time and time again: “It is the mental thing, you probably could see that on the field when the goals went in. We worked a lot on that all year. Then we started to make more mistakes because one thing compounded another and then another mistake compounds the one that came before that.

“Then you get hammered on the back of that and some times we did things when there was no need to do it. It goes back to confidence, being cocky and confident on the ball and maybe the Leitrim lads are not backing themselves enough.

“It comes back to their club football being more competitive. Being put under more pressure, they’re playing faster and their thought processes are much faster. That is the difference between the division 1 and division 4 player, it is not that he is actually any quicker or a better footballer but his thought processes are much much quicker because he has to do everything quicker to survive in that environment whereas at the lower level, they will survive doing much, much less.”

Looking at specific incidents in the game, Terry hailed Shane Moran's impact on the game: “He was persistently fouled, you couldn’t put it any other way. That’s the way it was but we probably kicked six or seven scores off the back of those frees. He is a big unit and we felt there was an opportunity in the Roscommon full-back line to exploit that.

“It was probably the one thing that did work for us, maybe we became over reliant on it. Maybe we’re being too honest and when Shane actually engaged with them physically, sometimes referees see that as a players liking physical contact and you don’t get the frees that you deserve.”

Terry also returned to the theme of mentality and belief in his final remarks: “When we did what we were asked to do, it worked for us, there were times when we didn’t do it and we got punished for it and it goes back to the thought processes. It is like kickouts and the guys beside you is mentally reacting half a yard quicker, at this level, half a yard is going to beat you. So you have to be thinking of moving before the other guy and that is what they have to start looking at.

“We probably needed everything to make sure we stayed in the game and Roscommon maybe didn’t need as much as we did, we needed all those things and we didn’t get them.