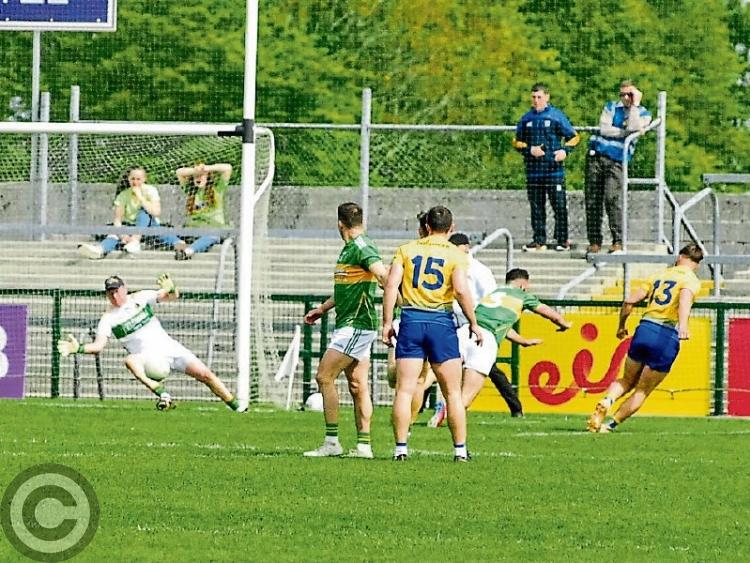 Dr Hyde Park proved to be a painful experience for all of a Leitrim persuasion last Sunday with Leitrim goalkeeper Cathal McCrann struggling to comprehend where it had gone so horribly wrong for Leitrim.

As a veteran of the Leitrim team, Cathal is frustratingly familiar with such heavy defeats but it is not an experience that gets easier to endure.

Reflecting on the game, a constant source of frustration for the Gortletteragh goalkeeper was Leitrim’s inability to deal with the speed and speed of thought of the Roscommon players.

The feeling of frustration for many was born out of the fact that while recording a win was deemed highly unlikely; after three years of heavy defeats at the hands of the same opposition it was hoped the gap had been closed.

Reflecting on the game Cathal said: “Today is very disappointing. I thought we would come in here and give this one hell of a go but their speed caught us out.”

The argument that a division four team never has a hope against a division one team may be becoming more of a reality but Cathal was not looking for excuses when he said: “They (Roscommon) are still only humans, it’s still 15 on 15 but that speed of thought.

“They have played at that level and division four just won’t get away with it at the higher levels.

“We have to change our mindset, the speed of thought has to be quicker but someday we will get there.”

An early chance for Shane Moran gave encouragement but ultimately the concession of three first half goals ended the game as a contest.

“We had the first chance and maybe if that went in but look, that’s ifs and buts,” reflected Cathal.

The runs from deep caused problems all afternoon with Cathal commenting: “It was obvious we struggled to handle their strong runners, we just couldn’t handle the runs. Micheal (McWeeney) and Paddy (Maguire) did well in their individual battles but I’ll go back to those runners, they will kill any team; they killed us there anyhow.”

Shane Moran was arguably Leitrim’s best player, operating at full-forward but it could be argued the loss of the Ballinamore man from the Leitrim midfield was a significant factor with Cathal commenting: “It probably was in one sense but he was very good inside.

“He came out and won his individual battle 100% and was unlucky not to get one or two more frees.”

After such a heavy defeat it can be difficult in the immediate aftermath of battle to focus on or search for positives but Cathal is full of belief in this young team and believes they will bounce back.

“Over the course of the year, yes the team is getting better,” he insisted.

“It’s at a good age, there are a lot of lads there that can play for another eight or ten years and that is a good thing.”

With the Connacht championship coming to an abrupt end once again, attention now turns to the qualifiers with Cathal eager to ensure what has been a year to remember finishes on a more upbeat note than was the case in Dr Hyde Park.

“You want to get a win back,” he said emphatically. “We lost the league final and lost here, it could put a dampener on the year.

“We just want to get a good draw in the qualifier, get another win and get the thing rolling again for next year for division three.”