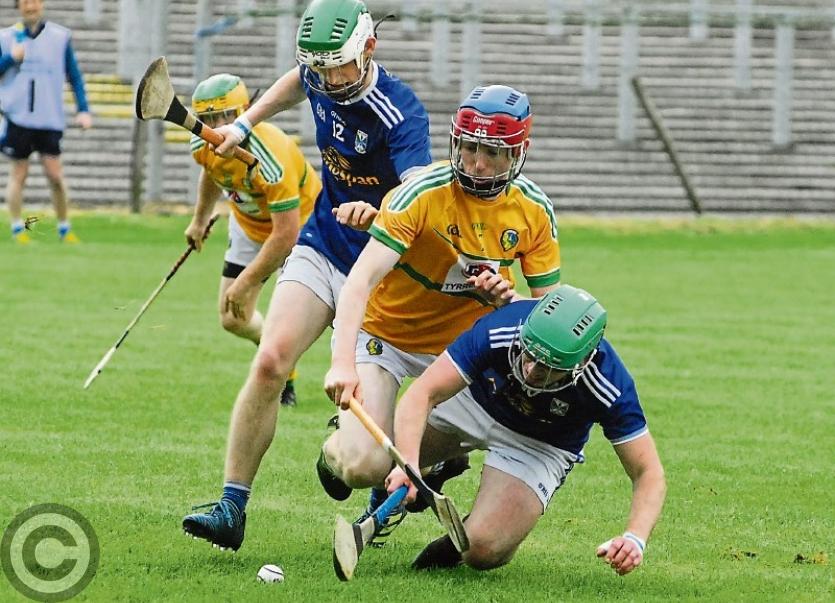 Leitrim kept their Lory Meagher Cup hopes alive when they overcame a strong challenge by 14 man Cavan in Avantcard Páirc Seán Mac Diarmada on Saturday to win by three points at the end.

After a controversial loss a week before, Leitrim needed a victory to keep their hopes alive and they did that with first half goals from Colm Moreton & Clement Cunniffe proving the difference in the final analysis.

To reach the Lory Meagher Final, Leitrim will have to beat Fermanagh in their last group on Saturday, June 8 and then rely on scoring difference should Lancashire beat Cavan in Kingspan Breffni Park.

Fermanagh’s place in the final is not yet guaranteed as wins for Leitrim and Lancashire would lead to a three way tie and scoring difference would then decide the outcome.

Cavan corner-back Dominic Crudden received an early red card when he was reprimanded in the first minute of the action. Shortly afterwards Gavin O’Hagan opened Leitrim’s account with a free.

Colm Moreton extended Leitrim’s lead with a third minute point and Cavan opened their account two minutes later when Diarmuid Carney split the Leitrim posts from a placed ball. Leitrim hit back with another Moreton point from play in the eighth minute.

Cavan fought back to get on level terms over the next five minutes with Caoimhín Carney putting over their first point from play and Diarmuid Carney converting his second free of the game.

Moreton edged Leitrim back in front when shot a 13th minute point but Colum Sheanon answered within a minute. Cavan took the lead for the first time when Carney’s well struck 17th minute free sailed over the crossbar.

Leitrim got their noses back in front a minute later when Clement Cunniffe beat his marker and drove his shot low to the Breffni men’s net.

Almost immediately Cavan’s full-forward Kevin Conneely reduced Leitrim’s lead to the minimum when he fired over a point. It was still a one point game by the 21st minute mark after Gavin O’Hagan (free) and Enda Shalvey swapped points.

Then came the decisive score when Colm Moreton put Leitrim four points up when he struck for his side’s second goal on 22 minutes after some very good build up play by his team mates for a well-executed score.

Cavan had a Kevin Conneely goal disallowed two minutes later after referee Aidan Ferguson ruled Conneely was in the ‘square’ before he received the ball. Conneely received a yellow card shortly afterwards following another incident.

Mark Moffett cut Leitrim’s lead to three when he fired over a 28th minute point and the sides were back level within a minute when Jack Barry drove to Leitrim net, giving goalkeeper Declan Molloy no chance.

Leitrim responded positively to Barry’s strike and edged into a two point lead by the 34th minute after Gavin O’Hagan (free) and Ben Murray split the Cavan uprights but Cavan finished the half strongly with two Carney frees to level the game for a fourth time, leaving the halftime score 2-7 to 1-10.

Cathal O’Donovan extended Leitrim’s lead when he shot over within two minutes but the sides were back on level terms for a fifth time two minutes later when Carney punished Leitrim’s fouling from a free.

Carney edged Cavan in front for what proved to be the last time when he put over a 40th minute free but a Colm Moreton point tied the scores two minutes later.

Then in what proved to be a turning point in the game Karl McDermott and Stephen Goldrick hit a point each to edge Leitrim ahead by the 46th minute, Jack Barry replying a minute later.

Colm Moreton, after getting a yellow card, increased the advantage and the home side went four points up by the 58th minute after Gavin O’Hagan converted a free and Clement Cunniffe shot over from play.

Shortly afterwards Cavan was reduced to 14 men when Kevin Conneely was given a straight red by referee Aidan Ferguson while Leitrim’s Liam Moreton received a 62nd minute yellow card.

Cavan cut the Leitrim lead back to two over the next six minutes after Diarmuid Carney converted two frees. Ben Murray hit back with a 69th minute point, which gave his side a one goal advantage as the clock ticked down towards full-time.

In the last scoring action, Carney from a free and Murray traded points. Cavan won two frees in the dying minutes which Carney struck low towards the Leitrim goals but the home side’s defence stood firm as they held out for the win.

Main Man - Leitrim had many players who stood up out the day like James Glancy, Enda Moreton, Ben Murray, Gavin O’Hagan, Cathal O’Hagan and Clement Cunniffe. But Colm Moreton probably made the biggest contribution to his side’s win with his overall play and the scores he got.

Talking point - Cavan beat Leitrim in the Allianz Division 3B league game earlier this year in Ballyconnell. On Saturday Leitrim gained revenge for that defeat. But Cavan played the last 11 minutes or so of the game with 14 players and made Leitrim fight all the way.

Turning Point - After Karl McDermott and Stephen Goldrick hit over a point each in the 43rd and 46th minutes, Leitrim took a lead that Cavan could not overturn.

Ref watch - Aidan Ferguson kept what was generally a very even tempered game flowing all through. He was strict on the over-carrying of the ball and punished a few Leitrim players in this matter. Ferguson overruled his umpires when he disallowed Kevin Conneely’s 24th minute Cavan goal ruling Conneely was in the ‘square’ before he got the ball.

Highlight - Cavan’s Diarmuid Carney, in what was a fine exhibition of dead ball striking, converted ten frees for the Breifne men over the course of the 70 minutes. Carney also showed clearly that Leitrim has a problem with the concession of two many frees in scoring range.

Lowlight - The attendance in Avantcard Páirc Seán Mac Diarmada was probably less than 100. It was disappointing for the two teams and their mentors, who certainly could say the ‘16th man’ wasn’t there for them on the day.

What next? Unless Leitrim are successful in their appeal to Croke Park over the Lancashire game, Leitrim must better the result of the exiles in the final round, Leitrim facing Fermanagh and Cavan taking on Lancashire.