Gaels blow up a storm on the double in Division 1 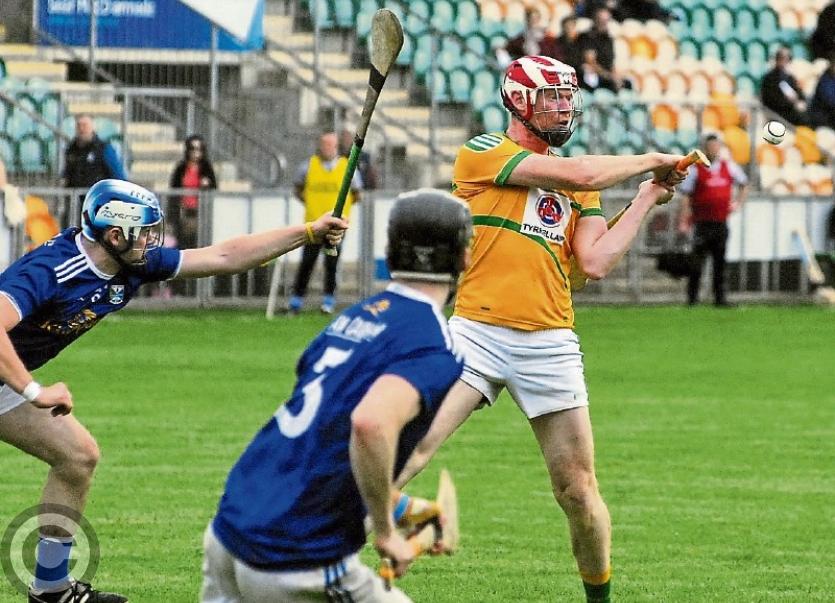 Colm Moreton, pictured here in action for Leitrim hurlers against Cavan on Saturday, played a major role in Leitrim Gaels' surprise victory over Aughawillan in the Dunnes Bar Division 1 clash

Melvin Gaels maintained their perfect start to the Dunnes Bar Division 1 league but it was their fellow Gaels in Leitrim who caused the biggest stir with their first win of the campaign thanks to a victory over county champions Aughawillan.

In the battle of the Gaels in Bundoran, the Kinlough men stormed to yet another impressive win as they saw off the Drumshanbo men 3-10 to 1-3 as they remain just one point ahead of Ballinamore Sean O’Heslin’s in second.

The scoreline is somewhat misleading, however, as Allen Gaels trailed by just four points at the break on a 1-7 to 1-3 scoreline but two late goals from Melvin Gaels put a bit of a gloss on the scoreline, although the fact that the Drumshanbo men failed to score in the second half will be a major worry.

The Ballinamore men won their parish derby with Aughnasheelin on a rather bizarre scoreline of 5-5 to 0-2, a result that might have been affected by the fact that so many players from both teams had seen action with the County hurlers, junior and U20 footballers in the previous five days.

Ballinamore now stand on nine points, the only point they have dropped coming against neighbours Aughawillan.

The County champions were plunged back into the relegation battle after they suffered a surprise 4-9 to 1-13 loss to Leitrim Gaels, the first of the campaign for the village team. The game was notable for two features, county hurler Stephen Goldrick scoring four goals for the Gaels while Aughawillan lost the services of keeper Colin Maguire early in the first half after suffering a head injury following a save from a Goldrick spotkick.

Perennial County and League finalists Glencar/ Manorhamilton and Mohill both had big wins at the weekend, Glencar/Manor beating Gortletteragh by 12 points in a 3-12 to 1-9 victory that brings their current run to three wins on the trot.

The victory moves the north Leitrim side up to fourth in the table on six points while Gortletteragh have yet to win a game in this year’s campaign and are languishing at the foot of the table.

Fenagh St Caillin’s suffered their third loss of the campaign when Mohill prevailed by two points in an exciting and free-flowing encounter in Fenagh, the county finalists winning 3-12 to 2-13 to remain in third place in the table.

Another big derby was the meeting of St Mary’s Kiltoghert and Annaduff and with the table so congested, this was a major game. The game started fairly evenly with both sides swapping three points but a surge from St Mary’s yielded five points and a halftime lead of 0-8 to 0-3.

Annaduff brought on experienced trio Ray Cox, Jimmy Cox and Ronan McCormack for the second half and despite a Ray Mulvey point, the changes seemed to be working as Alan Glancy grabbed a goal and Sean McNabola pointed to bring Annaduff to within two points.

The Carrick men responded with a point but Annaduff were on a roll and points from McNabola, Dillon Keane and Ray Cox left them a point in front.

Annaduff should have extended their lead but Sean McNabola hit the upright and they were made pay in spectacular fashion as Carrick went straight down the field and county U20 starter Diarmuid Kellegher buried the ball in the Annaduff net.

McNabola converted a free to leave a point in it but St Mary’s finished with three unanswered scores, the last from County star Ray Mulvey to secure their second win of the campaign.