Goals do the trick for Gortletteragh 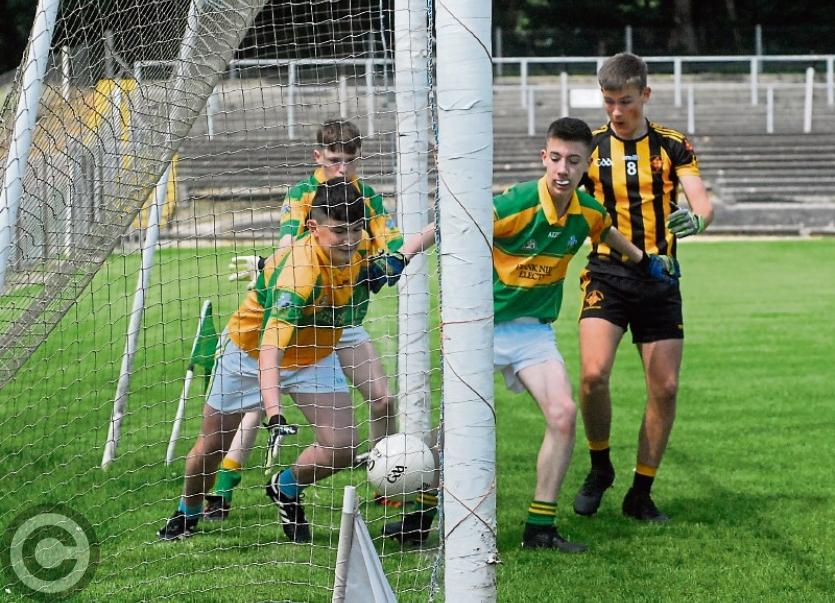 The ball appears to have crossed the Gortletteragh line as keeper Riaghan Ward dives to punch the ball clear Picture: Willie Donnellan

Goals win games and they certainly did last Sunday as Gortletteragh's ability to find them the net proved the difference against a misfiring Mac Diarmada Gaels in Avantcard Pairc Sean Mac Diarmada.

Two goals from Nathan Ward and Brendan Naughton when playing against the wind in the first half proved crucial as Mac Diarmada Gaels were unable to build up any sort of lead when they had the strong wind at their backs in the first half.

The sides were level at the break at the end of an inexplicably long first half of over 36 minutes which, when you're playing against the wind, is an even greater handicap but two key points left Gortletteragh in a brilliant position.

A Ciaran Reynolds goal, set up by great work from Jonathan Boyle, put the winners in command before a few positional switches, which saw Conal Doyle move into attack, transformed his team. Suddenly Doyle was creating and taking scores while also having a goal controversially not given.

But Mac Diarmada Gaels were never able to draw level and Gortletteragh hit them late to kill off the game.

Ciaran Reynolds opened the scoring from a free on two minutes before Nathan Ward burst through a couple of tackles, lost the ball but managed to play it soccer style past a defender before slaming the ball to the net on seven minutes.

Paul Moran got Mac Diarmada Gaels off the mark on nine minutes but three minutes later, Gortletteragh took advantage of a poor clearance and Brendan Naughton found the net with a shot that appeared to deceive the keeper.

A shocked Mac Diarmada Gaels started to find their rhythm with Alan Mulhall scoring a huge point before a great run led to a Paul Moran point on 14 minutes. From a kickout three minutes later, Raplh McKeon gathered and drove a good shot over the bar to cut the gap to three points.

Ciaran Reynolds saw a free hit the woodwork and Mac Diarmada went down the field with Paul Moran scoring on the run. The points continued to flow for the Ballinamore and Kiltubrid amalgamation with Eoin Connaughton pointing after a shot had cannoned off the woodwork.

Moran and McKeon added points as Mac Diarmada Gaels went in front for the first time but two injury time frees from Ciaran Reynolds put Gortletteragh ahead. Mac Diarmada Gaels responded with a Harry Farrell point to leave the scores tied at 2-3 to 0-9 at the break.

The second half started with Brendan Naughton's shot bouncing and hitting the woodwork but Jonathon Boyle was able to score a lovely point on four minutes.

Nine minutes in, a great move involving Boyle and Ward ended with Reynolds blasting the ball to the net for a killer goal. Cian McNulty scored a great point on the run and Reynolds added a free midway through the half to extend the lead to six.

Mac Diarmada Gaels weren't finished: a Conal Doyle's free started a fightback and they were denied a goal when a Doyle free was spilled and looked to have crossed the line but Riaghan Ward punched the ball clear.

Doyle didn't have long to wait for his goal as less than a minute later, his precise low finish gave Ward no chance.

Mac Diarmada Gaels were unable to build on the goal and it took six minutes for Doyle to reduce the gap to one point but Gortletteragh broke down the field and Ciaran Reynolds scored a great free from the wing.

With the Gaels pushing forward, Gortletteragh were getting more goal chances with Karl Winters denying one breakway but, from the resulting loose ball, he was unable to stop Jonathan Boyle with a precise finish to set the seal on Gortletteragh's five point victory.

MAIN MAN - Ciaran Reynolds was at the heart of everything for Gortletteragh, Riaghan Ward was good in goal while Conor Niblock, Luke McNamara, Matthew Davis, Ryan Cunningham, Jonathan Boyle and Jack Reynolds impressed. For Mac Diarmada Gaels, Paul Moran, Eoin Connaughton, Karl Winters were best but Conal Doyle really stood out, particularly when moved into attack late in the game.

TURNING POINT - With Kiltubrid having closed a six point gap down to just one with over five minutes left, Ciaran Reynolds scored a brilliant point for Gortletteragh from out on the wing, this score steadied the winners and saw them home with a late goal.

TALKING POINT - Kiltubrid were livid that they were not awarded a goal when the ball seemed to cross the line. They did get a goal in the next attack and while there is no guarantee they would have got the second goal if they had been awarded the first,  it does appear to be a big miss from the officiating team.

REF WATCH - Mixed sort of game for Ray McBrien, played a bizarre six minutes of added time in the first half when there were no stoppages. Looked as if his watch had malfunctioned.