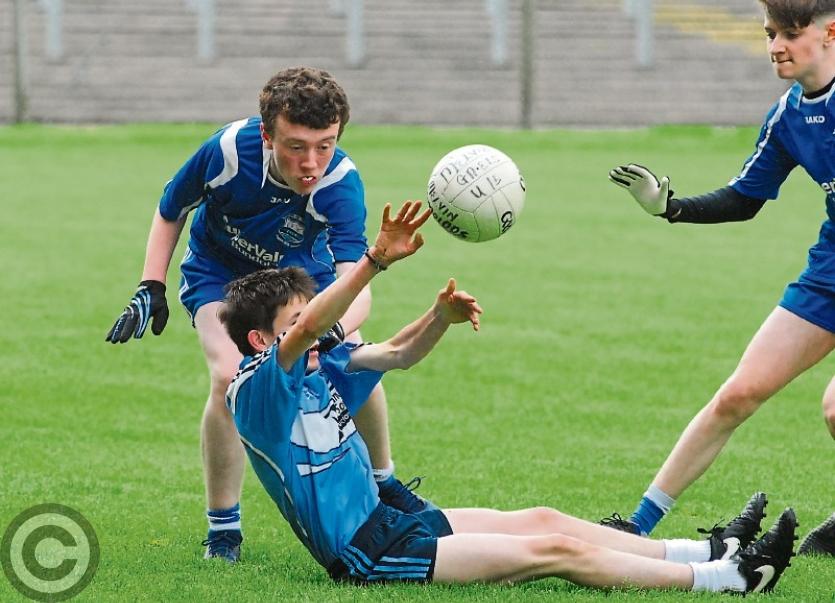 A powerful finish that saw them score 2-3 in the final ten minutes of action saw Allen Gaels prevail over a wasteful Melvin Gaels in the Westlink Coaches U15 League 13-a-side Final in Avantcard Pairc Sean Mac Diarmada.

Melvin Gaels had a lot of wides over the hour but couldn't match the more clinical Allen Gaels who produced the goods when needed most, goals from Rory O'Donnell and Kian Dennis ensuring the title went to Drumshanbo.

Allen Gaels almost started with a bang but had a goal disallowed for a foul in the build-up and it was Ben Higgins who scored first for Melvin Gaels. Mark Reynolds scored a lovely point for Allen Gaels under fierce pressure before Ciaran McMorrow converted a free.

Melvin Gaels saw Ben Higgins hit the woodwork while keeper Sean McNiece made a great save to deny Rory O’Donnell a goal. But the Drumshanbo men didn’t have long to wait as a long range shot from Mark Reynolds carried enough power and accuracy to bounce off the firm surface and into the net past McNiece.

It was a fortunate break for Allen Gaels as Melvin Gaels took over with the wind at their back but they simply couldn’t buy the scores they needed. They had a glimmer of a goal but defensive pressure meant Joseph Stewart had to settle for a point.

McNiece denied O’Donnell a second goal when clean through and Stewart finished off a patient and well worked move with a point. But it was seven wides and missed chances that really cost a dominant Melvin Gaels in the long run.

Ruairi McGloin converted a free but Mark Reynolds finished off a good move out of defence with a fine point. The Gaels marksman added another after a free broke free but the half ended with a third Stewart point to leave Allen Gaels leading 1-4 to 0-5.

A good run saw Joseph McGloin open the scoring after less than 20 seconds to cut the gap to a point but a Ciaran McMorrow free for over-carrying restore the gap. Gero Gilmartin replied with a free while a block on a Stewart shot denied the Kinlough youngsters a score.

Melvin Gaels did have a strong call for a penalty with a pretty late and obvious mistimed tackle on Ruairi McGloin but referee Mark McCloskey waved play on. Allen Gaels also had a goal chance when Ciaran McMorrow’s shot hit the woodwork but it was Melvin Gaels still dominating.

Ten minutes into the second half, Melvin Gaels drew level when a Karl Foley shot was plucked out of the air by Ruairi McGloin and he fired over the bar but Allen Gaels were soon back in front when sub Prezemek Zeremba broke clear on goal but his shot was deflected over the bar.

Allen Gaels Padraig Keane was yellow carded for a late clash with Eoghan Gallagher that saw the Melvin Gaels man go off injured. Melvin Gaels had a bad wide from a free and they were made pay in devastating fashion.

A Liam McGourty free found Prezemek Zeremba on his way through, the ball broke loose and fell right into the path of Rory O’Donnell who charged through for a killer goal.

Allen Gaels drove home their advantage - Zeremba scored after a one-two with O’Donnell before O’Donnell had a shot saved by McNiece but the rebound fell to Kian Dennis for an easy goal.

Rory O’Donnell fired over the bar after Mark Reynolds’ shot hit the crossbar with Reynolds himself finishing off a good day with a fine point, Adam Dolan scoring a late consolation goal for the Kinlough men.

MAIN MAN - Mark Reynolds was excellent in taking his scores while Rory O'Donnell was a constant threat throughout. Ciaran McMorrow was also a big player for the winners and sub Prezemek Zeremba made a big impact as well. For Melvin Gaels, Ruairi McGloin, Andrew Gallagher and Adam Dolan all had big leadership roles while Joseph Stewart was a threat.

TURNING POINT - Rory O'Donnell goal for Allen Gaels with less than six minutes to go was the winning of this game, giving his team a huge boost of confidence and they drove on to victory from there.

TALKING POINT - Allen Gaels were under fierce pressure for most of this game but knew how to take their scores. Melvin Gaels will be wondering how they lost this one as they dominated possession but kicked some very costly and damaging wides in both halves.

REF WATCH - Mark McCloskey got a lot of his decisions right but did miss what looked like a certain penalty for Melvin Gaels at a time when they just a point in arrears.