Second half surge wins it for Brigid's 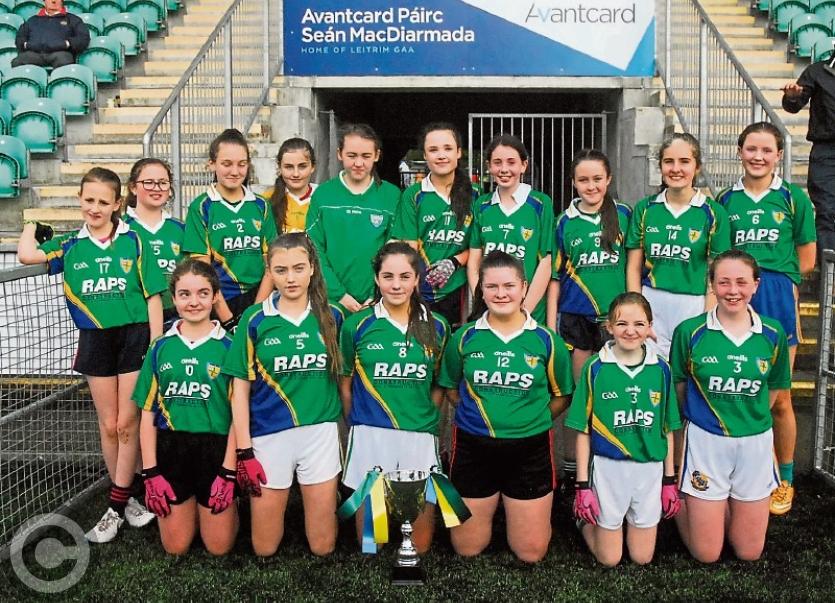 A powerful second half display that saw them outscore Sean O'Heslin's by 1-10 t0 1-0 led an impressive St Brigid's to the Leitrim Ladies U14 13-a-side title in Avantcard Pairc Sean Mac Diarmada on Monday evening.

St Brigid's actually trailed at the break by three points but a succession of brilliant frees from Tara Galligan Maguire and the impressive hard running from Dearbhla Gunn proved too much for Ballinamore Sean O’Heslin's to counter.

The Ballinamore girls had shown fighting spirit in the first half to plunder good goals from Emma McKiernan and Teagan McGloin but they couldn't match the all round strength of St Brigid's.

The impressive Dearbhla Gunn opened the scoring after 30 seconds, soloing through the middle to fire from distance over the bar, something she would repeat numerous times during the game. Lauren Donohue had a shot saved by the excellent Chloe Maguire and Laura Maguire drew Sean O’Heslin’s level from a free.

Gunn again ran through the middle to score on 10 minutes and Shana Mannion was very unlucky to fire high over the bar when a goal was on for St Brigid’s. Emma McKiernan kept O’Heslin’s in touch with a free before defender Teagan McGloin found herself through on goal with only the keeper to beat and she did.

Ballinamore now led 1-2 to 0-3 but Mannion came back with a good point on 19 minutes while Chloe Maguire made a wonderful one-handed save to deny St Brigid’s a goal. Aileen Maguire scored a well taken point but it was matched by a Lauren Donohue free.

Ballinamore looked to have taken control just before halftime when Emma McKiernan launched a rocket of a shot from 20 yards to the St Brigid’s net, leaving Ballinamore Sean O’Heslin’s 2-3 to 0-5 at halftime.

McKiernan put a free wide early in the second half but St Brigid’s took over the game with a remarkable display of freetaking from Tara Galligan Maguire as she hit three four frees in a six minute spell along with a great point from Caoimhe Cullen.

That put St Brigid’s into a one point lead, 0-10 to 2-3, but they were rocked on their heels when Ava Gallogly made a fantastic catch, turned and buried a good shot in the back of the Brigid’s net.

But St Brigid’s were not to be denied as they hit straight back with a great goal from Lauren Donohue. Tara Galligan Maguire fired over two frees, one from a tight angle, and from being two points down, they were now three points ahead in a six minute spell.

Dearbhla Gunn and Caoimhe Cullen both added quick points with Gunn finishing the scoring in added time with another typical lung busting run to seal a six point victory.

TURNING POINT - Lauren Donohue's goal came just three minutes after Ballinamore had grabbed a goal against the run of play; this score killed off the O'Heslin's fightback and push St Brigid's to a deserved victory.

TALKING POINT - It took time but once St Brigid's found their range early in the second half with Tara Galligan Maguire scoring a spectacular series of long range frees from all angles and distances.

REF WATCH - A pretty easy game for T.P. McLoughlin to oversee as it was played in the right spirit and he got a lot of the decisions spot on.