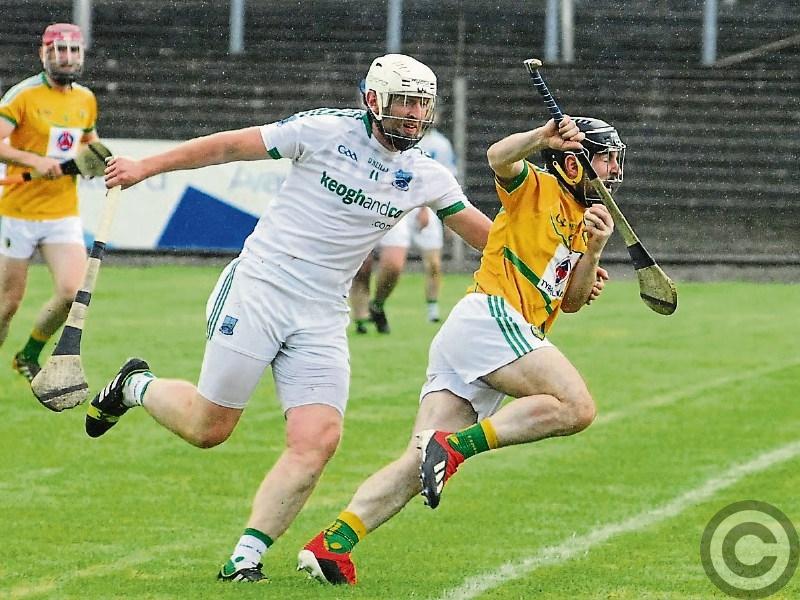 The golden age of Leitrim hurling added another chapter last Saturday when the Green & Gold hurlers overcame favourites Fermanagh to reach the Lory Meagher Cup Final for the second time in three seasons.

Needing a four point victory to go through by virtue of a higher scores for, Leitrim made sure they didn't need it as Ben Murray and Gavin O'Hagan scored five points in the last ten minutes of action to secure a famous win and a place in the Lory Meagher Cup Final.

Leitrim reached the final two years ago only to lose to Warwickshire and they face another overseas team in Lancashire on Saturday week, June 22, in Croke Park but they will be determined to add silverware to one of the most successful eras for hurling in the county.

With the U16 hurlers winning the Stephen Dorrigan Cup, Carrick winning a first ever Connacht club title for the county and the county senior hurlers reaching Lory Meagher Cup and Division 3B Finals in the last two years, Leitrim are on the cusp of a breakthrough and a win in the Final would be exactly that.

This was a victory borne of a refusal to countence anything other than victory and it showed as Leitrim never gave up even when it looked as if Fermanagh were about to smash their dreams. And they got their reward their courage deserved with the final result.

Leitrim got off to a bright start with a Colm Moreton shot hitting the post before Clement Cunniffe took advantage of a defensive slip-up to drive the sliothar low to the net. Fermanagh hit back with a John Duffy point from distance but the visitors would hit three wides in as many minutes.

Those misses were forgotten as Leitrim conceded a goal on ten minutes - a scramble for the ball developed on the top of the D, Eoin Cleary emerged from the ruck to pass to a completely unmarked Conor McShea and he finished with ease past a helpless Declan Molloy.

Fermanagh were in the ascendancy and added points from a Duffy free and a good Mark Slevin point but two Ben Murray points, one from 65 yards, brought Leitrim back within reach after 18 minutes.

After a couple of bad wides, Gavin O’Hagan steadied his game with a lovely point after a pass from Adam Byrne and Clement Cunniffe tapped after a long free into the danger area was played back to the full-forward by Byrne.

Leitrim had a rash of bad wides before John Duffy and Gavin O’Hagan swapped frees before a Duffy free left the scores level on 29 minutes.

However, Leitrim struck a big blow three minutes before the break when a Cathal O’Donovan pass set Ben Murray free and his low finish gave Mark Curry in the Fermanagh goal no chance, a score quickly followed by a Gavin O’Hagan free.

Fermanagh reduced the gap to three points with a long range Duffy free as Leitrim led 2-6 to 1-6 at the break.

Francis McBrien reduced the gap to two with a point from distance just over 30 seconds into the second half but Leitrim replied in style, Cathal O’Donovan benefiting from good work by Clement Cunniffe to point while Gavin O’Hagan converted a free.

Karl McDermott opened up the desired five point gap four minutes into the second half but it was Fermanagh who would start to dominate the next 15 minutes. John Duffy put over two frees, the second moved in for dissent, while sub Shea Curran scored a brilliant effort from play on 11 minutes.

Adam B Byrne scored a good point from the wing and O’Hagan added a free on 14 minutes but when a Leitrim attack broke down, Caolan Duffy dodged two defenders to point for Fermanagh.

From the puc-out, Enda Moreton surged down the wing to score a brilliant point but Fermanagh hit back with Duffy converting two frees and Caolan Duffy again pointing after Leitrim turned the ball over in attack with 56 minutes gone.

Leitrim’s dreams looked to be dead but Ben Murray made a fabulous catch from a puc-out to score a great point and despite John Duffy replying with a good point, Leitrim suddenly got the scent of victory.

Two brilliant Ben Murray points, either side of Fermanagh’s Francis McBrien hitting the post with a long range shot, left three points between the teams. An O’Hagan free on 67 minutes gave Leitrim the required four point margin but Leitrim were not settling for that.

O’Hagan showed good strength to work his way free despite being held to sweep over a brilliant point. Again Fermanagh came back with a monster Duffy score but a great interception by Enda Moreton saw him surge upfield before finding O’Hagan for a wonderful match winning score.

Fermanagh had one late free and tried to drop it short but the Leitrim defence held firm to spark off wild celebrations among the Leitrim players and dedicated band of hurling supporters.

HIGHLIGHT - The manner in which Leitrim finished this game. Fermanagh dominated a lot of the second half and looked to have wiped out the Leitrim lead only for Ben Murray and Gavin O'Hagan to sweep over five points between them in the last ten minutes.

LOWLIGHT - None really, pity more of the Leitrim crowd didn't turn up a bit earlier to cheer on a Leitrim team reaching  a national final. No excuses for fans to have missed this one!

TURNING POINT - Ben Murray's double strike for two points in two minutes put Leitrim three to the good with seven minutes remaining, either side of a Fermanagh shot hitting the woodwork.

MAIN MAN - Hard to pick between Gavin O'Hagan and Ben Murray as both were absolutely crucial. O'Hagan had a dodgy start, missing some frees, but came up big when needed while Murray was the same, missed a few good openings in the first half but got the crucial scores when needed.

REF WATCH - A game played in good spirit meant Donegal referee James Connors didn't have a lot to do. Did penalise Fermanagh with a couple of hard yellow cards.

WHAT'S NEXT - Leitrim take on Lancashire in something of a grudge match given the circumstances of the first game in this competition and the fact Lancashire beat the Green & Gold in the Division 3B Final last year adds a lot of intrigue  to the Final on Saturday June 22, in Croke Park.

TALKING POINT - A lot of talk in football circles about a second tier competition. What the Leitrim hurlers have achieved over the past few years shows exactly what a competition for counties competing at the right level can bring.