Nervous Leitrim get the job done 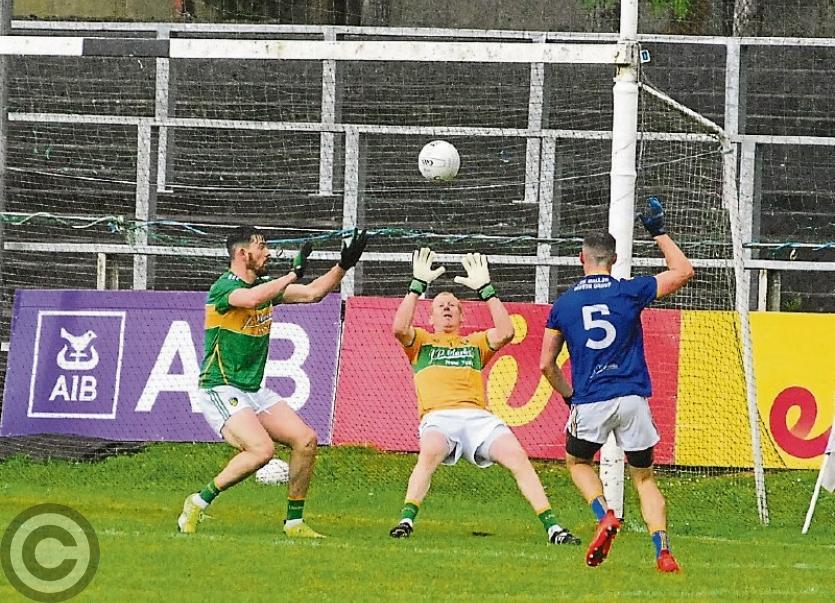 Wicklow's David Devereaux watches as his shot rises to hit the Leitrim crossbar during the first half Picture: Willie Donnellan

John Connolly sees a Leitrim team overcome its own nerves in a tight, tense battle and rediscover a spark of the form that won promotion

It wasn't pretty, in fact it was pretty dour but Leitrim found their resilience last Saturday under immense pressure from Wicklow and got the victory the county so desperately needed in Avantcard Pairc Sean Mac Diarmada.

A fourth victory in the Qualifiers and a repeat of the 2012 win over Wicklow was vital for this young Leitrim team to overcome the trauma of Hyde Park and while it was tough to watch at times, Terry Hyland's team did what they had to do - they won!

Victory was far from assured and Wicklow made it an arm wrestle of a game all the way through. In Mark Jackson they had a freetaker who punished each and every Leitrim indiscretion and it was almost enough to carry Wicklow to the win.

That it didn't was down to Leitrim's renewal of the spirit that served them so well in the League but was so conspicuously absent during the loss to Roscommon. The players spoke of it freely after the game, the need to rectify what had happened in the Hyde and they did.

Wicklow opened the scoring when Padraig O’Toole brushed past Sean McWeeney pretty easily and fisted the ball over the bar in the first minute.

Leitrim weren’t long in responding when it appeared as if Pearce Dolan had been stopped in his tracks but he recovered and fired over a good point. From the kickout, Leitrim won the ball back and Domhnaill Flynn fired the ball over the bar.

Mark Jackson started a busy afternoon by converting a fourth minute free before the game entered a period of stalemate with Domhnaill Flynn putting a free badly wide while Shane Quinn dropped a free short.

We also had the strange sequence of a free being retaken after Conor Reynolds ran in front of Mark Jackson as he went to kick the free. Rory Finn’s follow-up free hit the post and went out for a fifty, converted by Jackson.

Ray Mulvey had two wides, one after a short fifty but a needless bout of pushing led to a yellow card for Wicklow’s Ross O’Brien and a successful Ryan O’Rourke free on 19 minutes. Jackson replied with a remarkable 50 yard free but O’Rourke came right back with his own free.

Leitrim surged when a bad kickout was intercepted by O’Rourke. Evan Sweeney’s pass found Shane Quinn and the Mohill man kicked a good point. The lead stretched to two when Paddy Maguire’s run down the wing ended with an excellent score.

Wicklow hit back with a Mark Kenny free and two points from Rory Finn to regain the lead, the second a great score on the run. Thankfully, Ryan O’Rourke curled a wonderful shot from the left wing over the bar to tie the scores for halftime.

The minutes before halftime were full of incident; Oisin McCaffrey was black carded for pulling down an opponent, Sean McWeeney hit a bad wide and Aidan Flynn fisted a ball wide across the face of the Wicklow goal.

The key incident was Wicklow spurning a goal chance as David Devereaux broke through the Leitrim rearguard, thankfully his shot cannoned off the crossbar and clear in a real let-off for Leitrim.

Tied at 0-7 apiece, the second half promised more of the same but Ray Mulvey opened the scoring after some patient Leitrim play. Jackson hammered another fifty yard free from near the sideline over the Leitrim bar to tie the scores again.

Leitrim were starting to find a bit of doggedness in the game - Ryan O’Rourke lost the ball but it was won back and sent to Pearce Dolan who got the ball over the bar. Dean McGovern had a bad wide but Leitrim led by two again when O’Rourke converted a tenth minute free.

But very much like the league game between the counties, Wicklow would not give up. Dean Healy was booked for a heavy hit but he went very close to a Wicklow goal, Cathal McCrann making a vital stop and diverting the ball out for a fifty converted by Jackson.

From the kickout, Conor Healy won the ball back and fired over a fine point. Another O’Rourke foul edged Leitrim back in front but there were bad wides from Domhnaill Flynn and Pearce Dolan as the home team were unable to pull away.

With 15 minutes to go, Jackson scored a remarkable 60 yard free that carried high over the bar and two minutes later, Wicklow worked a third goal chance but Cathal McCrann got in to disrupt the move, probably getting away with picking the ball off the ground in front of the post.

Leitrim literally went straight down the field, a long delivery brilliantly fielded by O’Rourke and the Fenagh man scored a wonder point.

That score seemed to infuse Leitrim with renewed spirit and a high Sweeney shot that seemed to be going nowhere was knocked down, Pearce Dolan chipped a good shot from the right hand side over the bar with 11 minutes of normal time remaining.

Leitrim were growing in confidence with O’Rourke charging through the Wicklow defence only to lose the ball skying his shot high and wide, Ray Mulvey following up with a wide. Wicklow kept the pressure on with a good Dean Healy point but Leitrim went straight down the field and O’Rourke fired over to open up the two point lead.

With both teams making changes, one of those subs made an impact when Niall Brady gathered a quick low free and turned to score on 68 minutes, Leitrim’s last of the game and the first time they had a three point lead.

The final minutes, plus five minutes of added time, were a trial of nerves for Leitrim fans with Ryan O’Rourke opting to go for a goal when a scoring chance presented itself instead of taking the insurance point, his shot blocked and cleared.

Wicklow sub Conor McGraynor hit a wide while Jackson put over his seventh free two minutes into added time. The keeper would have one more free but drove it well wide as Wicklow never got a sniff of a goal against a Leitrim defence who were now in top form.

HIGHLIGHT - A lot of highlights, some wonderful scores but if you were to pick just one, Ryan O'Rourke made a fabulous catch, turned and drove the ball over the bar 22 minutes into the second half, pushing Leitrim into the lead and driving them on.

LOWLIGHT - Has to be said, a lot of lowlights too with poor handling, poor decision making and the age old problem of poor finishing blighting a Leitrim performance and making the game a lot tougher than it was as Wicklow managed to stay in touch mainly through placed balls.

TURNING POINT - Mark Jackson scored a massive 60 metre equalising point and from the kickout, Wicklow worked a goal scoring opportunity. The shot was smothered and it appeared as if Cathal McCrann lifted the ball off the ground - no free was given and Leitrim worked the ball down the field for Ryan O’Rourke to score a wonder point - a big turning point.

MAIN MAN - Ryan O'Rourke stood tallest when Leitrim's need was greatest, converting crucial points at just the right time. His contribution was closely followed by that of sub Dean McGovern who  energised the team when he came on as a sub, the excellent Conor Reynolds put in a tremendous shift all over the field, even if he had a tendency to give away a few frees.

Hard to fault the contribution either of Evan Sweeney, Aidan Flynn, Paddy Maguire, Shane Moran, Pearce Dolan or Cathal McCrann who made two vital stops in one-on-one situations that threatened a goal.

REF WATCH - Barry Cassidy let the game flow, didn't make too many controversial decisions  despite Leitrim fans feeling he was against them at times. Didn’t really have a choice with Oisin McCaffrey's black card, a challenge that was more a result of inexperience rather than malice. A solid enough outing.

WHAT'S NEXT - Leitrim take on Clare in the round two of the All-Ireland Qualifiers on Saturday June 22.

TALKING POINT - A win is  a win and that is, without doubt, the most important thing. It wasn't a great performance with a team that looked low on confidence growing in self-belief as the game went on. The final 15 minutes saw Leitrim regain some of the swagger and self-belief of the League and it showed down that final stretch as Leitrim surged for the win.

It wasn't quite the explosion of brilliance that last year's Louth victory was but it was nonetheless an important, hard fought and deserved victory. Tougher tests lie ahead but a loss last Saturday would have undone a lot of the good work Leitrim had achieved early this year. A good day.